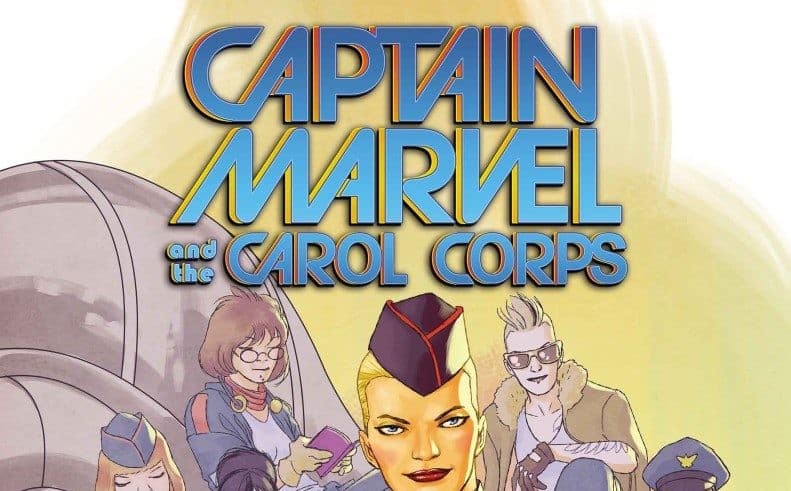 Kelly Sue Deconnick, Kelly Thompson, and David Lopez take us through the world of Hala Field where the Carol Corps protects the innocent in this brand new Secret Wars tie-in, but all is not well under the rule of Doom, and Carol is going to get to the bottom of it! 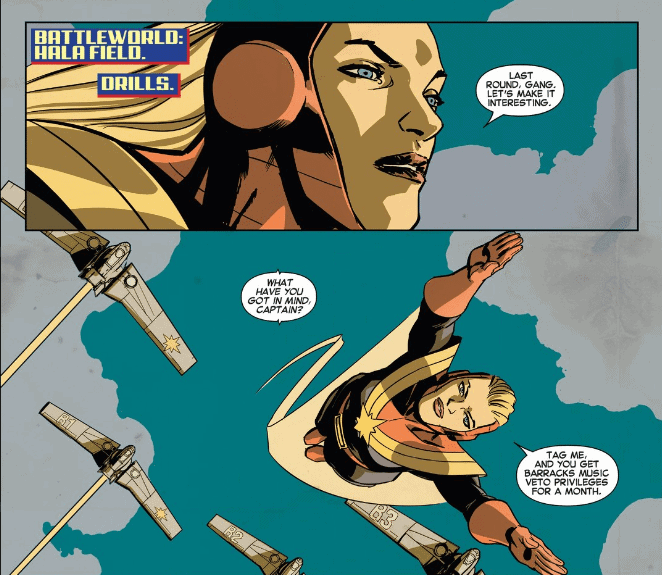 We begin with Carol and the Carol Corps, as they are so lovingly nicknamed, playing an epically awesome and dangerous version of tag before Thor Corps arrives to wreak havoc. Carol’s biggest fan Kit, however, has also been chosen to become a Thor and something about the entire situation just seems off to Carol. She is called in by her superior officer to go and ambush an incoming ship that she feels off about, but Carol follows her orders. But at the last minute she realizes that they are not firing on an enemy and gets involved in that typical Captain Marvel way.

Like many of the Secret Wars tie-ins, the influence of Doom upon the world is placed front and center here, but Deconnick and Thompson use this influence as a way to explore new things about the character of Captain Marvel. In the previous run of the series, Carol was never faced with actual orders. She was an Avenger that was trusted to be her own commander. In fact a major part of the first story arc Deconnick wrote for her was based on Captain Marvel not following orders. Therefore, this issue’s decision to focus in more on Carol as a member of the army is a welcome changer from the previous comics. This change, however, does not come at the cost of Carol’s sense of humor and strong willed personality. Deconnick and Thompson have found a way to allow Captain Marvel to follow orders with just the right amount of trepidation and ultimate regret that she never comes off as a pushover. 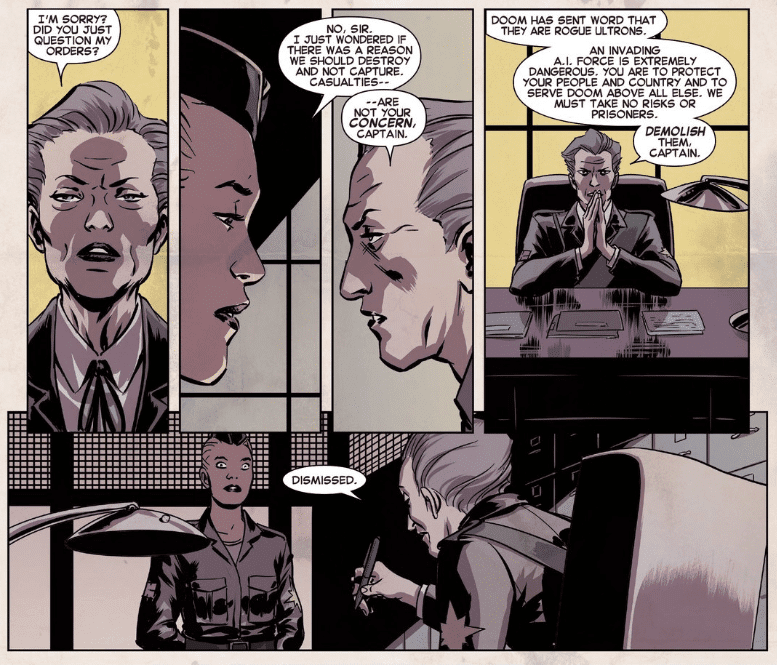 In reference to the story, the other great part of this issue is in the title, the Carol Corps. Although we are not given a very large amount of time with them, we are given the chance to see part of their personality and dynamic. One of the stand outs is Bee. She is the one who questions the mythology that Doom has indoctrinated them all with  and introduces the questions that Captain Marvel and the Carol Corps will be investigating in the next issues. However, outside of just Bee the entire dynamic between the Corps is lovely. Furthermore, the presence of an entire Military filled only by women is a very welcome sight. Their commanding officer is a woman, as well, but it is never mentioned as a large departure from the norm. There was a lot of press around A-Force when it came out with a large focus on how feminist it would be, or if it was feminist at all. I think that much pressure to create a strong world that was ONLY full of women was slightly toxic, and created an impossible standard for A-Force to live up to. But Captain Marvel just is feminist without being questioned, and I think that is what helped me enjoy this issue so much. 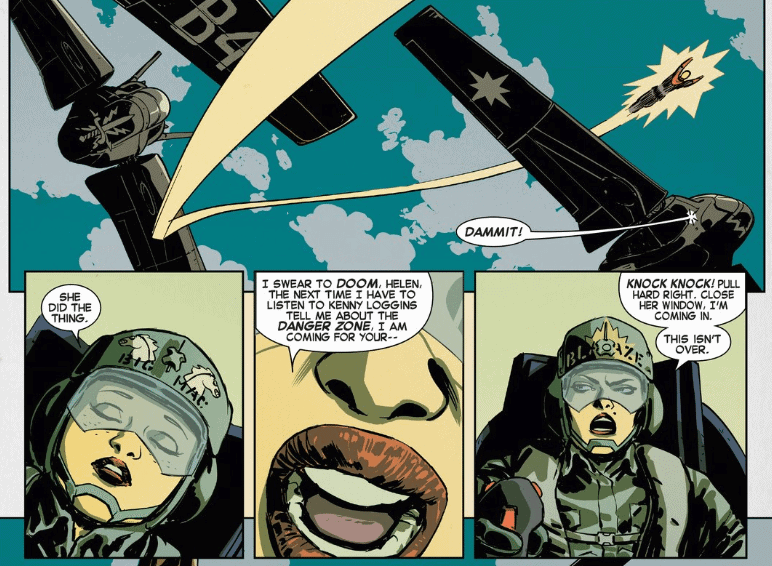 Finally, the art in this issue delivers the beautiful and slightly retro style that we have come to expect from David Lopez’s work on Captain Marvel. The costumes in particular are a personal favorite, the old-style army fatigues look super professional and snazzy. Especially whenever the girls are in their Barracks all wearing various forms of the outfit, you got to love a good bomber jacket. Furthermore, instead of the standard Secret Wars explanatory page, they have given in a nice retro twist. Overall, there is a lot to love here: Strong and Fun Women, Intriguing Mystery, and Beautiful Art. Now it’s your turn to check out Captain Marvel and the Carol Corps. Tag, you’re it!