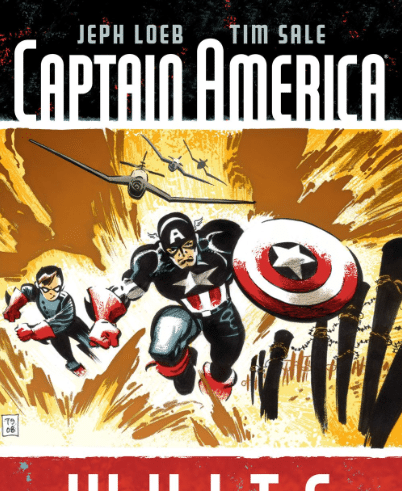 CAPTAIN AMERICA: WHITE #3 has Cap beat up some Nazis and gets shy around a girl!

Sale and Loeb continue their ‘color’ series in great style. Cap and the Howling Commandoes are surrounded by a Nazi Squadron, with a tank thrown in for good measure. As the tension builds, Cap’s demeanour never changes. He remains still and focussed while all around him wait for him to go into action. When he does, he is a Red, White and Blue man of action, who packs a powerful punch. Each move he makes is deliberate and every action counts. Sale’s use of movement really gets us in to the heat of the action, each Nazi felled in a powerful attack. 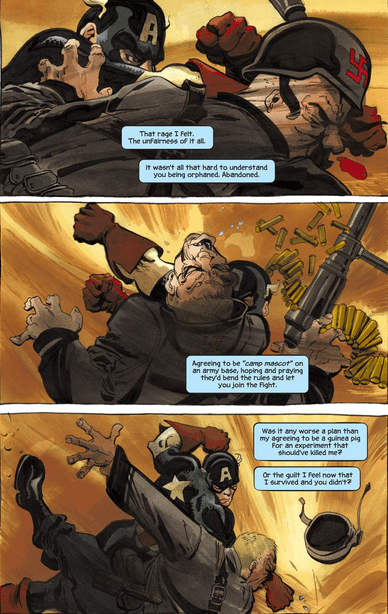 While action is provided, there are a lot of humorous nods to the Marvel Universe, including a certain Howling Commando wearing an eye patch for the first time. As Cap and his squad move deeper into enemy territory, snow starts to fall. The whisps of air added by Dave Stewart adds an extra coldness, and as they walk deeper into the forest, the sound of crunching snow echoes in your ears. Then Cap meets Marilyne from the French Resistance. Still on the outside he is the proud Cap as always, but inside Loeb’s dialogue echoes a man who still has a lot to learn about romance.

If there was any doubt that this series is an attempt at creating a golden age story featuring everyone’s favorite Captain, Tim Sale decides to seal the deal, with a homage to Tales of Suspense #85. In the original issue, Cap has a silent hand to hand fight with Batroc the Leaper. This was rendered with power by Jack Kirby and is striking in its composition. Loeb has Cap fight another Leaper, and well… Sale drew it the only way he could. Kirby Style! 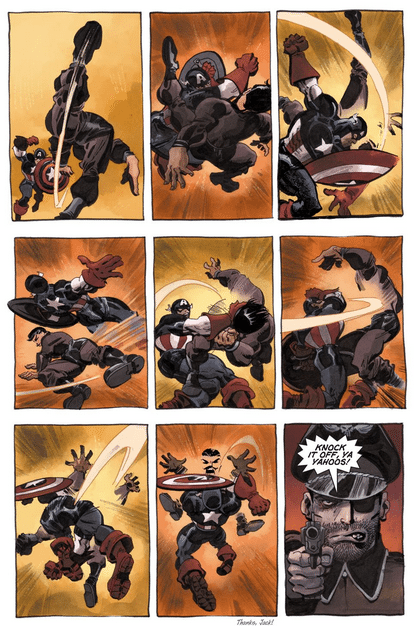 Even at the bottom of the action sequence, you can see the inscription ‘Thanks Jack!’ This issue and series is a love letter to Lee and Kirby, and it shines in every beautiful page. But wait! Why are they in France in the first place? What was their mission? All is revealed in a stunning cliff hanger splash page which will give you goosebumps. This is the King of comics at the moment, and deserves all the recognition it can get. Now when is issue four out?