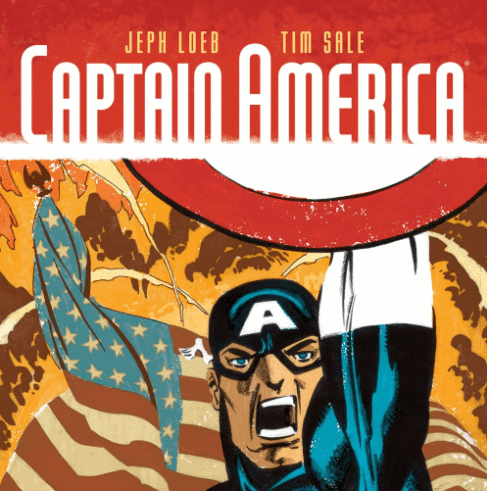 A lot has changed in the Marvel Universe; the status quo of many flagship characters has been uprooted, and we’re entering an All-New, All-Different Marvel. Don’t get me wrong, change can be good. Great even. And in most cases, the shake up has worked. However, it seems that the character of Steve Rogers has gone through a radical change, stripped of his super soldier strength, and aged dramatically, he has lost the right to be called Captain America. That mantle has been passed on to Sam Wilson. And rightfully so.

Throughout this, Steve has remained strong, but you can feel a man who has lost his way. More prone to anger and frustration, he has become more world weary than ever before. And this is a guy who watched as one of the Presidents of the United States committed suicide before him (Don’t believe me True Believers, check out Steve Engleharts Captain America 175 for all those crazy details).

The point is that, Captain America, our Cap, unwaveable, patriotic, heroic, optimistic, has not been seen in a while. 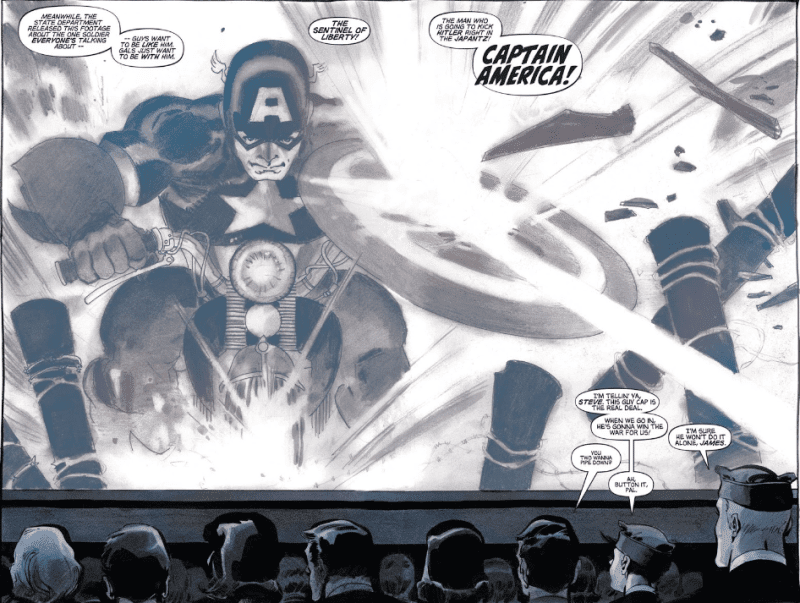 Which leads me to CAPTAIN AMERICA: WHITE. In 2008, CAPTAIN AMERICA: WHITE #0 was released, and it was a fun and entertaining retelling of Steve and James becoming Captain America and Bucky. It sparkled with age-old era story telling, as if Joe Simon and Jack Kirby had come back to tell us how it was done. And then…

Nothing. #1 was delayed, and nothing was released. Until now.

CAPTAIN AMERICA: WHITE took roughly seven years to reach my hands, but it was worth the wait.

Created by Jeph Loeb and Tim Sale, behind the other Color Series, such as SPIDER-MAN: BLUE and HULK: GREY, this is their attempt at defining a comic legend while setting it within the early years of the beginning of the Marvel age of comics.

READ: Find out how the creative team of CAPTAIN AMERICA: WHITE fare with SPIDER-MAN: BLUE

Loeb writes a story which lends itself to Captain America and Avengers lore. Before Steve starts to reminisce about Bucky, we see Sale’s artistic interpretation of AVENGERS #4, when Captain America was discovered in the ice, and was introduced into the mainstream MU. It begins with a Splash page of Steve lying on a hospital bed, and then cuts to a two page spread full of energy as he leaps to his fight, reaching out to a lost Bucky.

The story very quickly becomes a personal tale as Steve sits within a church and talks to Bucky. Wishing he was still alive and remembering the adventures they had together. 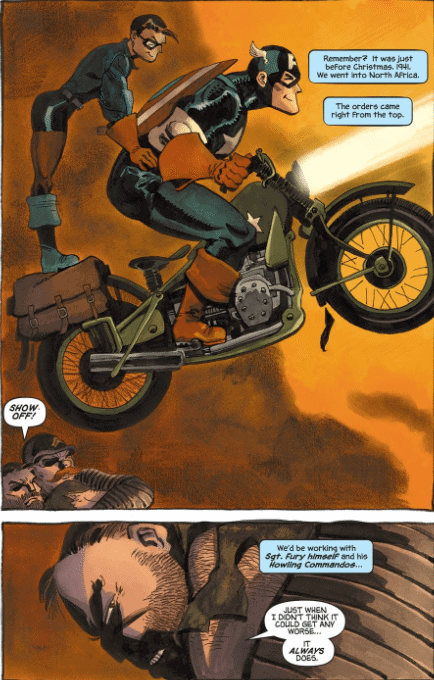 Jeph Loeb does a great balancing act of letting us see how frustrated and sorry Steve is over Bucky’s death, and the dialogue feels almost modern in its personal angst. This then is juxtaposed with an almost joyous old school dialogue. It reads like you have a Golden age comic in your hands, that the Howling Commandos are back, and Stan Lee is cranking out a million wise cracks a second. That is not to say that Loeb is aping that style, but that he is creating a different era right before our eyes. Yet it does have its quiet moments, and the Bucky and Cap are not so different after all. 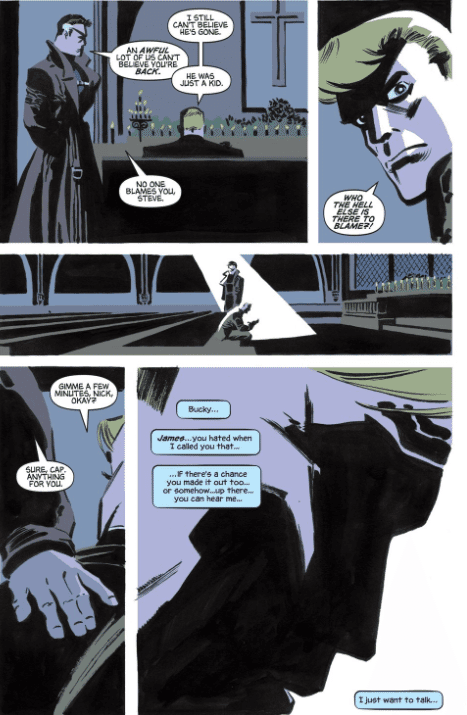 Sale’s art feels rough and ready, like it’s almost unfinished, or in the early stages of being drawn. This gives it a unique frenetic look that just bubbles over with charisma and charm. The action scenes are fun, and full of acrobatics. All the character designs feel authentic, and belong in that time. The setting feels like its WW2. While the art isn’t too detailed, there is enough to create a place, a time, that existed in a war-torn land so many years ago.

Dave Stewart should get a special mention with his colours, and adds so much to Sale’s art. Each scene has a different colour scheme. Caps awakening has the light colours asscociated with a grim hospital setting, the church has a noirish colour palette, while World War 2 seems like the world is on fire, with oranges and reds. Richard Starkings on letters deftly uses the blank space in Sales drawing to great effect.

This first issue is a fantastic comic. It comes in with a slightly larger price tag of $4.99 but with that, you also get a reprinting of issue 0 AND an interview with the creative team.

You want something that smacks of old fashioned charm, and tells you a great character driven story? You’ve come to the right comic buddy! Excelsior!

READ: You’ve read about Cap’s Past, see what the future holds for Sam Wilson as Cap in our ALL-NEW ALL-DIFFERENT AVENGERS Preview