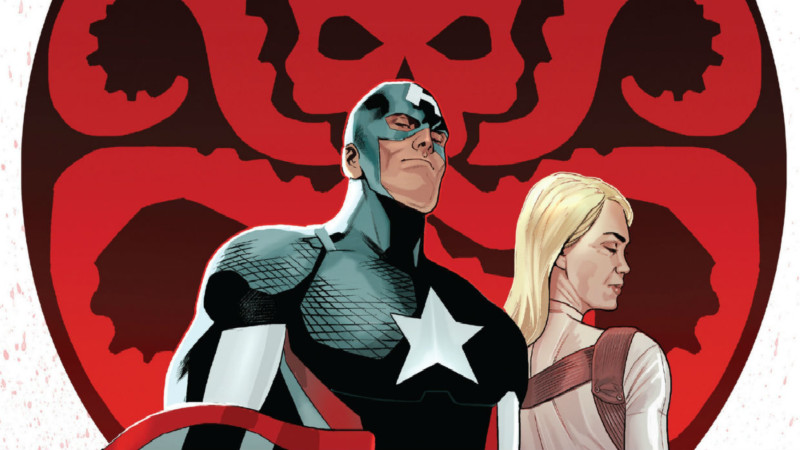 It’s a dark day for the Marvel Universe as Hydra’s power continues to grow. With Red Skull’s influence in Hydra rising, Captain America tries to figure out a way to remove him. CAPTAIN AMERICA: STEVE ROGERS Vol 2 builds a well-executed background for Hydra’s perfect weapon: Steve Rogers. This trade collects issues #7-11 written by Nick Spencer with art by Jesus Saiz, Javier Pina, and others.

READ: Want to get started on the new SECRET EMPIRE arc? Check out what we thought of issue #0!

The collection’s first issue begins with a look into the impact Hydra has had thus far. With a speech from Red Skull, we learn of Hydra’s global efforts. They see themselves as liberators with the power to win civilians over. Their regime is attractive to Sokovia’s victims who notice that some help is better than none. More people believe in Hydra’s mission. This is due to the fact that they are helping overthrow the fascist leaders that oppress them. As a result, Hydra is doing something positive, though their motive isn’t that good. 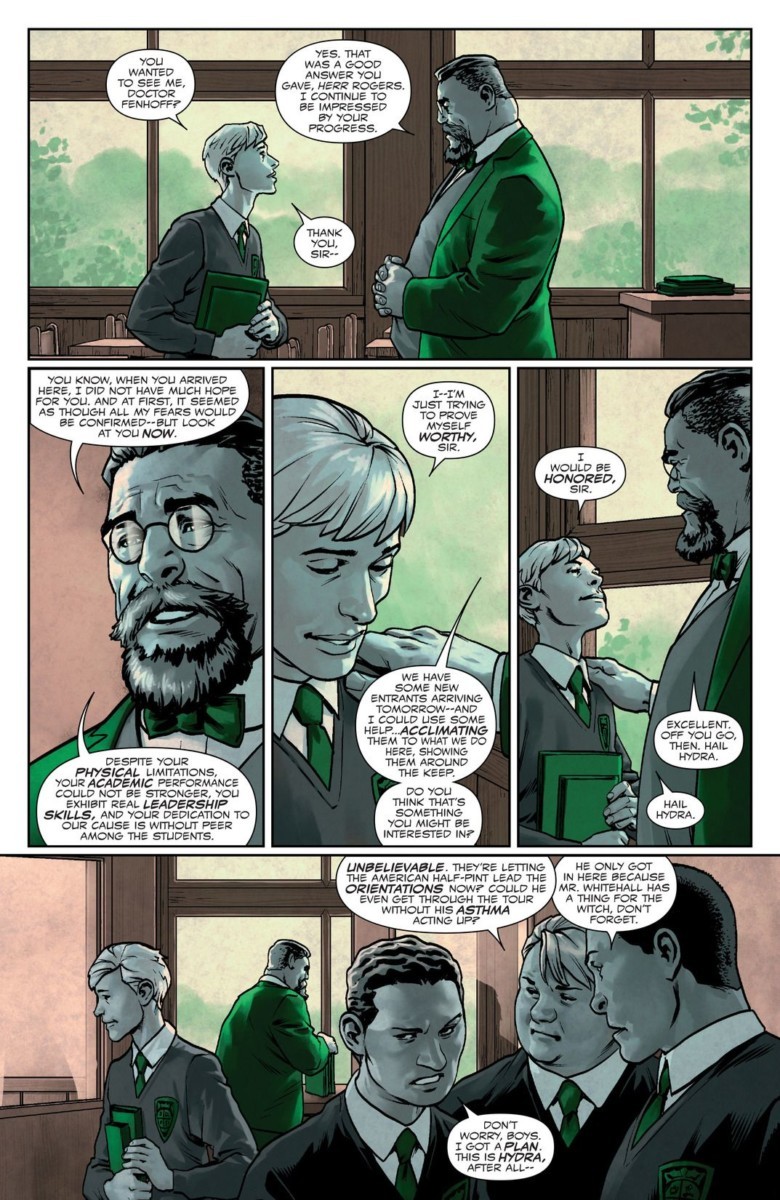 As Red Skull spreads his motivating speech, Steve plots with Doctor Selvig on how to overthrow the Supreme Leader in the name of Madame Hydra. The following issues build on Cap’s training in Hydra. It gives a background on how Steve Rogers was able to become Captain America. We get scenes showing his training as a boy and his friendship with Helmut Zemo. Zemo plays a key role in Steve’s development as an agent, working as his closest ally (much like Bucky Barnes does originally). Steve’s plan to infiltrate his way into the Super Soldier Program is made clear. All of these prime moments come together to build a history for Captain America that really does feel real.

Spencer’s writing develops a Captain America that is foreign and unwanted in our hearts, but it’s one we can’t get enough of. I jumped into this trade wanting to hate Spencer’s Captain America for portraying the ultimate betrayal. That didn’t happen though. The idea that Steve is such a calm, calculated agent was addicting. Even when he messes up by leaving loose ends, his reserve holds firm so as not to diminish the image of the first Avenger. Steve turns out to be the kind of double agent that you’d want to lead an event this big. It provides a bigger impact for the tension that will soon develop. Furthermore, it shows that no matter how morally good a character has been over time, they can still take a turn for the worst.

READ: Excited for SECRET EMPIRE? Take a look at Marvel’s teaser trailer for the new arc!

Later on, CAPTAIN AMERICA: STEVE ROGERS Vol 2 digs deep into the “The Trial of Maria Hill” (the trade’s subtitle). We’re given a front row seat to Maria Hill’s courtroom battle to remain the Director of Shield. Here we’re reminded of Maria’s flawed moments, particularly involving the first Civil War arc. Steve’s testimony in the trial is well set up. His logic makes sense in testifying against the Director. Also, this trial brings about an important tool that will be a major component in the Secret Empire event. The tool in mention is the awesome defense system that Maria Hill pitches in the courtroom. 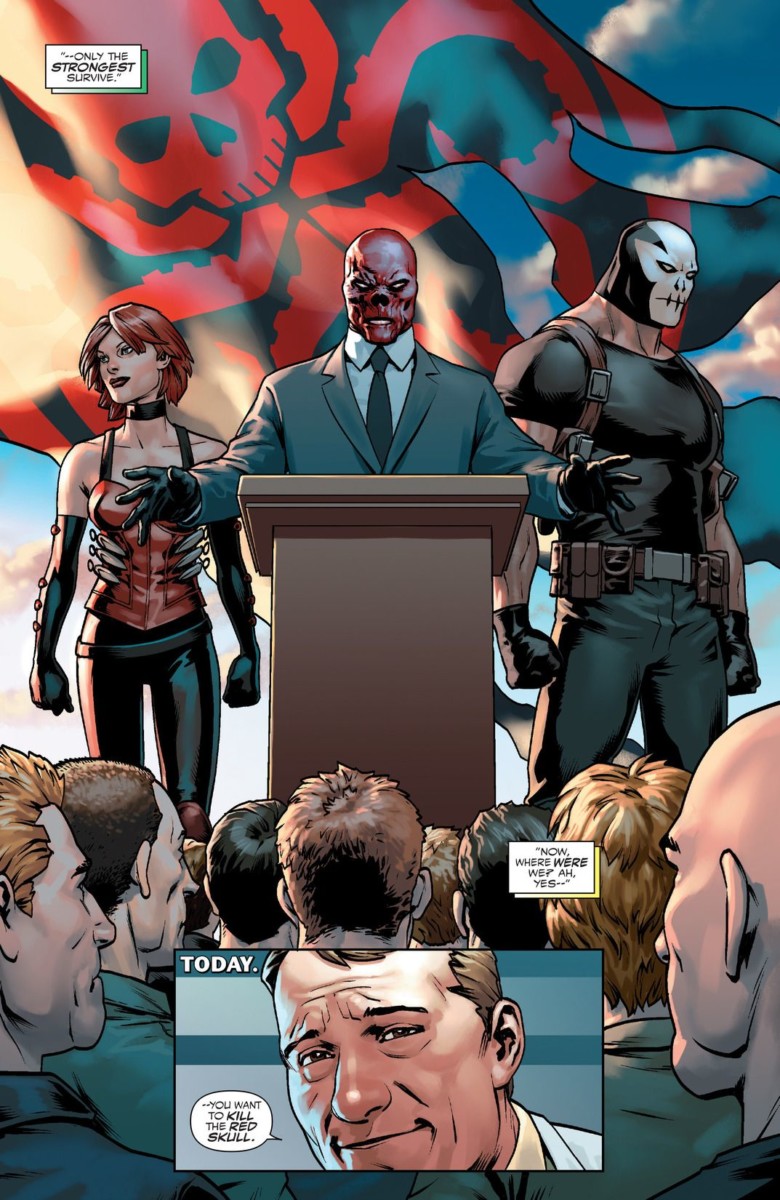 Of course, the art of Saiz and Pina brings out the some of the best we’ve seen for Marvel’s first avenger. These issues focus quite heavily on people, an aspect that is of great quality in these illustrations. Though Steve is a traitor, he easily masks it under a sympathetic facade that is beautifully delivered by these artists. Other characters such as Maria and Red Skull are penciled wonderfully to show the emotions they emulate. It adds great depth to intense scenes like her trial and Skull’s speech. Seeing a massive Chitauri fleet that almost covers a single panel is stunning. It beautifully brings out the detail they wanted to give the audience.

As a whole, “The Trial of Maria Hill” comes together as a behind-the-scenes reel of Hydra Cap’s development. We’re given many pivotal moments that set up Steve’s deception. From start to finish CAPTAIN AMERICA: STEVE ROGERS Vol 2 is an enjoyable collection. It follows Volume 1 nicely and sets up Volume 3 perfectly, making for an amazing bridge in Cap’s new history. That being said, SECRET EMPIRE looks like it has the potential to change Marvel’s recipe in a great, challenging way.