The second issue of CAPTAIN AMERICA: STEVE ROGERS is quick to cover its own ass in the wake of last issue’s twist. It’s essentially a giant monologue filled with tons of “oh, come on” moments that build to a climax many will see coming a mile away. That being said, it still entertains and there’s enough meat to balance out the potatoes. It may not be the most exciting comic, or the one fans wanted, but it’s setting a foundation for what could be an exciting Captain America story.

READ our review of the last issue of STEVE ROGERS and freshen up!

In short, this issue is a summary of everything the Red Skull and HYDRA have been up to for the past few years of continuity. He’s now a father figure to the female embodiment of the cosmic cube, Kobik, and is obviously using her to achieve his goals of world domination. Armed with Xavier’s mind control powers and all of Kobik’s power, he finds a way turn Steve Rogers into an agent of HYDRA.

See? No harm, no foul. Everything’s hunky dory over here. Captain America isn’t really a terrorist; somebody is just trying to change his history. Phew! 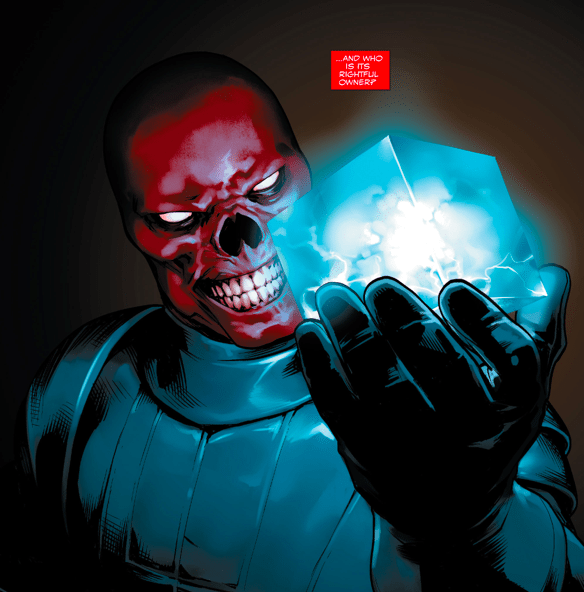 Writer Nick Spencer does his best in the wake of the death threats he received over issue one. Obviously, this issue was written and planned before the outburst occurred. That being said, this was more than likely the plan the entire time. Rogers would never be a HYDRA agent. Marvel would never un-do years of continuity like that. But it does highlight the fact that it felt like a gimmick, unfortunately.

Controversy aside, the issue is way stronger than the last. The pacing is solid, and while there is a ton of stuff happening here, Spencer handles it well. The Red Skull is entertaining, as is his somewhat sadistic relationship with Kobik. Unfortunately, it feels overly expository at times, which tends to make it a slog to read. There’s a ton of info to get through and it jumps around frequently, often making it hard to follow. 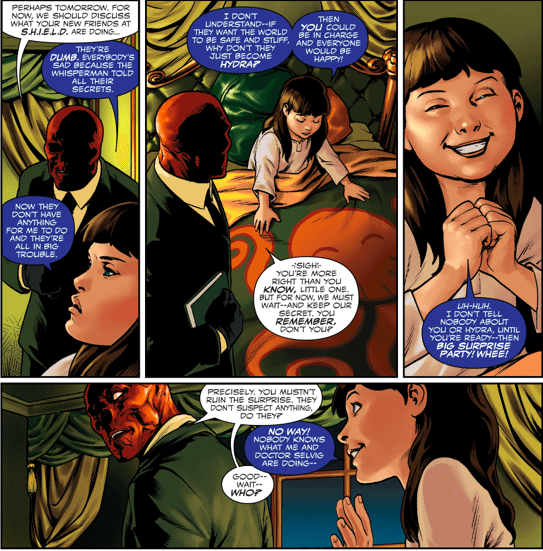 This issue brings little forward movement to the overall plot, but is necessary backstory to understand why Steve is now an agent of HYDRA. If this information is here to set the stage for future conflict between the Skull and Steve, it’s safe to say the series will pick up full swing in the coming issues. It’s a hell of a basis for conflict. It will be interesting to see what Steve does when he realizes how he has been toyed with.

LISTEN to our podcast discussing the great Marvel CIVIL WAR!

Jesus Saiz’s artwork is a great asset to this issue. While it still looks slightly off at times, as if it were painted by airbrush, it does a lot within the story. There are little things, like Kobik’s HYDRA-themed sheets, that make the panels fun to look at and contribute a lot to the story. The action is well-enough and easy to follow, and even makes the Red Skull pretty terrifying at times. Unfortunately, the character’s faces still look a little sub-par, but they are emotive enough to keep the story working.

Overall, this issue is a huge step up from the last. It works out the controversy of making Steve Rogers a villain while being entertaining. It’s smart, somewhat sadistic, and lays the groundwork for what could end up being an excellent conflict. Here’s hoping it plays out better than it started.