From the very beginning, Captain America has always been controversial, but he’s always been what the American public needed to see, even if they didn’t want to acknowledge it. Unfortunately, in Issue 17 of SAM WILSON CAPTAIN AMERICA, Nick Spencer is once again aligning himself and Cap against the public.

This time around there’s no Secret-Hydra Agent Steve Rogers running around. This time Sam Wilson and the new Falcon, a Mexican-American man named Joaquin Torres, face their greatest foe: literal Social Justice Warriors (SJWs). This is not even a subtle dig at the loudest voices against Steve Roger’s hidden Hydra history. Add Spencer to the long list of people and corporations (not that there’s much of a difference between those groups) who hate millennials. Next, he’ll be telling us that millennials are driving down the sales of print books and killing an industry that should’ve evolved long ago, but this is beside the point.

Within the context of the comic, this thinly veiled retaliation doesn’t get any better. Actually, context makes this whole situation even worse. The long and short of it is that when a news reporter makes a comment about deporting Torres, a group of college age kids literally try to murder her. To make it even worse, they are spewing pithy one-liners using buzzwords like “problematic” “safe space” and “mansplaining.” One character literally throws a grenade, shouting, “Consider this your trigger warning.” 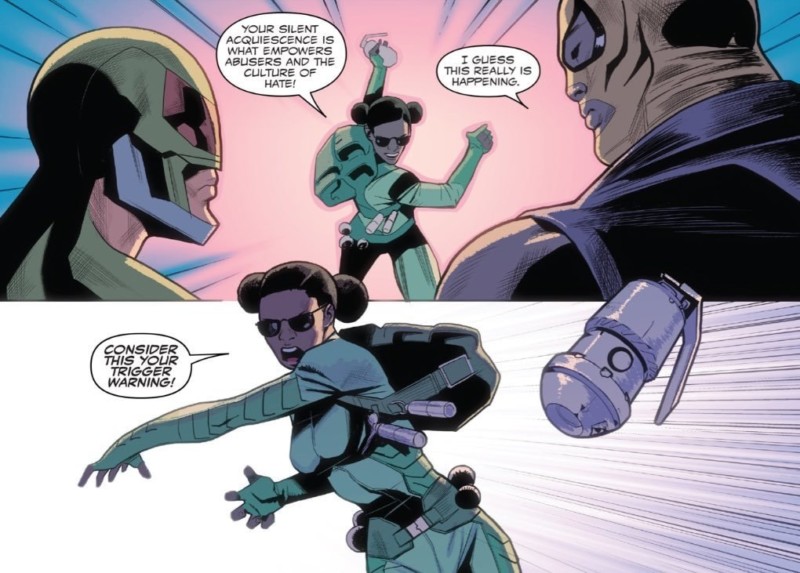 Not only is the dialogue painfully bad, but it shows a gross misunderstanding of the original critiques of CAPTAIN AMERICA: STEVE ROGERS and of how satire works.

Yes, if you want to get technical, Spencer’s latest story is a satire, but only in the strictest definition of the word. He uses “exaggeration to expose and criticize people’s stupidity or vices.” Nevertheless, satire goes beyond that, it is, to quote American journalist Molly Ivins, “the weapon of the powerless against the powerful. ….When satire is aimed at the powerless, it is not only cruel — it’s vulgar.”

Since 2011, Nick Spencer has been a comic book writer at Marvel, where he is responsible for writing the story for characters that have spanned decades. If that is not powerful, I don’t know what is. Maybe it’s not your definition of power, but it certainly fits the bill for privileged. Here is where you want to argue that I’m throwing around those Tumblr, social justice words and that I’m biased. But I never said I wasn’t biased and if you don’t think that being a comic book writer at Marvel is a privilege, an entitlement, an advantage, or a benefit, I honestly don’t know what to tell you.

For everyone else, it is genuinely concerning that in a time of such political unrest in our country, when our future is so uncertain, Spencer chooses to further normalize neo-Nazi behavior and demonize people who speak against it. Most recently, Spencer condemned the punching of Neo-Nazi leader, Richard Spencer, by saying on his Twitter:

“Today is difficult, but cheering violence against speech, even of the most detestable, disgusting variety, is not a look that will age well.”

Not only does he condemn the punching, but he denounces anyone who supports it. This doesn’t sit well with me for many reasons, the biggest of which are:

Back to the issue (Number 17) at hand, Spencer does everything in his power to discredit these Social Justice Warriors and the millions of millennials they represent. His satire feeds into the false idea that “social justice” is something only fanatical teenagers do on the internet, while sane rational adults are operating in the real world. This real world that just elected the most blatantly corrupt man to be President of the United States. In a time where we need to be united and rallied, Spencer’s response only serves to tear down the people that Captain America would stand with.

READ: More about the dangers of normalizing the Alt-Right!

In response to the backlash of this most recent issue, he remarks that he’s “amazed at how ppl get offended w zero self-awareness” over his “(very) light-hearted topical bad guys.” Since when has belittling the powerless ever been light-hearted? As for self-awareness, rather than listen to the criticisms offered by the audience, Spencer vilifies them; making them the literal enemy of his own self-indulgent work. It’s not subtle, funny, or even well-thought out. This storyline highlights one of Spencer’s biggest flaws, his inability to listen. 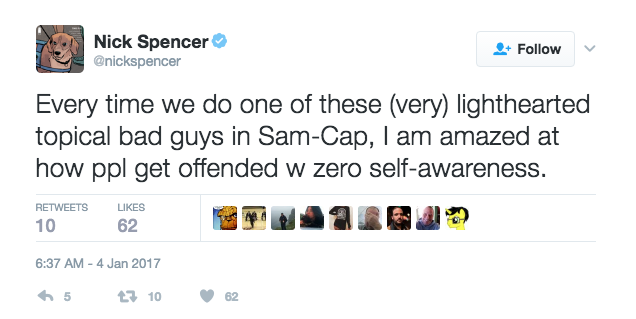 Spencer digs his heels, unwilling for even a moment to acknowledge an argument where his story is “wrong.” And it’s not even that it’s wrong. It’s that he creates a space that allows and even encourages the hatred and contempt of people seeking fairness and equality for all. This caricature pits the people Captain America fought to protect against the very mantle of Captain America itself. Spencer has no sympathy for anyone who disagrees with him. He, like most of the older generations, writes off any anger or criticisms as the whining of inexperienced, spoiled, participation-award-winning, millennials who would rather take selfies and post on their blog than do the real work.

And it’s this lack of empathy is the most disheartening thing of all.

In the first Captain America movie, Dr. Erskine tells Steve Rogers that he was chosen to be Captain America “because the strong man who has known power all his life, may lose respect for that power, but a weak man knows the value of strength and knows… compassion.” The mantle of Captain America belongs to a compassionate person, a trait that Spencer has removed.

This is not just lazy writing. Nick Spencer is unable to connect or even recognize that there are experiences outside of the one he lives. To him, any and all criticisms are an attack; an aggression that is met with aggression. (To be clear, by aggression I mean, microaggression­ — a comment or action that is subtly and often unintentionally hostile or demeaning to a member of a minority or marginalized group).

Social Justice Warriors, Millennials, whatever you call them, aren’t looking for a fight against Captain America. Nor would Captain America want to fight them. Captain America is, and always will be, a man of compassion. He is also the man who punched fascist leaders in the face hundreds of times. And right now, we need both of those things more than ever.