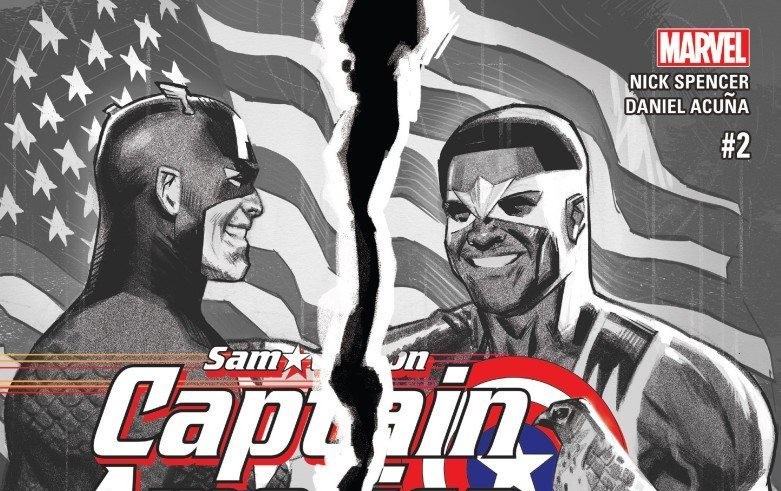 CAPTAIN AMERICA: SAM WILSON #2 doubles down on the social commentary of the first issue, establishing its point of view and committing to its new status quo.

Sam Wilson and Steve Rogers find themselves ideologically opposed, but ultimately fighting the same fight. The battle in the desert with the Sons of the Serpent was only the start of what may be an elaborate and sinister plot…

Fresh off the heels of controversy stirred up so well it got Fox News’ attention, CAPTAIN AMERICA: SAM WILSON pushes ahead with the same attitudes that started the controversy in the first place. Of course, it is more than likely that issues 1 and 2 were going to unfold this way anyway and #2 was probably already written before the Fox News dust-up, but it works to the title’s benefit to have part two be more of the same.

The narrative style is still shaky and a little tough to follow, and I hope it doesn’t continue in future issues. The worst is (though you wouldn’t be wrong to say I’m nitpicking) its trouble with defining Cap’s point of view on the narrative, leading to moments where Cap reacts to moments in the past in real time while telling that story in the present. I can forgive it all for now as it all seems necessary to set the pieces (of which there are many) in place and give this title a strong foundation. There are just as many narrative threads in this issue as there were last time, but all are unified thematically and all go towards the end of planting Sam Wilson’s flag as the All-New, All-Different Captain America.  With that in mind, the narrative is successful.

READ: CATCH UP ON OUR CAP COVERAGE!

It does wrap up a bit abruptly, but that’s mostly because one has to remember that the threads, as we experience them, have all already happened, and Cap is just telling us what happened. The main thread (in which he speaks to his fellow passengers on the plane) reached its end as logically as all the rest–it’s just jarring that they all end within the book in the span of only a couple of pages.

Narrative struggles aside, though, the book remains smartly and elegantly relevant, never trying too hard, and cleverly repurposing real-world issues in Marvel contexts: the best example of course being the instance of government overreach. It’s familiar to us in the real world as, say, the NSA’s ability to spy on anyone at anytime, but it’s presented in CAPTAIN AMERICA: SAM WILSON #2 as S.H.I.E.L.D.’s ability to alter reality thanks to a cosmic cube. The former is very real, and the latter is very Marvel, but the point is very much the same. 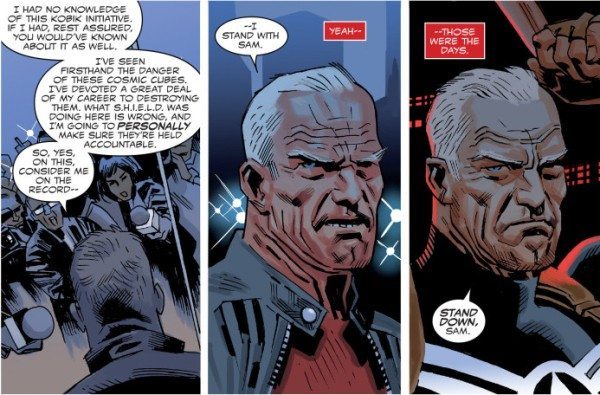 Whether intentionally or not, the book does highlight the hypocrisy present in Cap–first mentioned, amusingly enough, by the Supreme Serpent: while SamCap criticizes S.H.I.E.L.D. for overreach, he has the power to enlist birds and spy on anyone–literal eyes in the sky (not to mention his use of intimidation and threats of death while interrogating a suspect). It’s an exciting aspect to the character, and the book, that his flaws are front and center. Not that Steve Rogers is flawless, but his idealism stands–as it does in this issue–in stark contrast to Sam Wilson’s willingness to get his hands dirty. 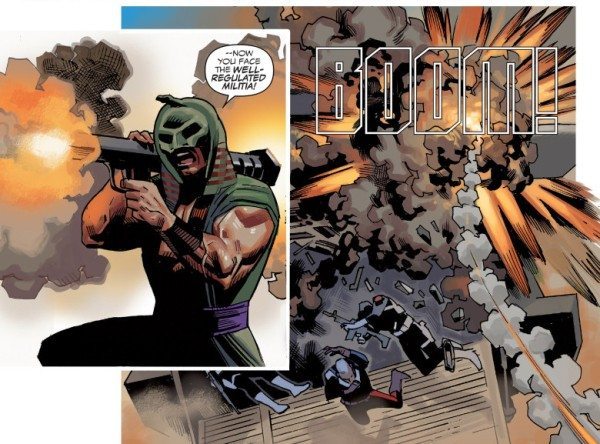 I wish there was more to add about the artwork, but Daniel Acuña is working just as diligently this issue as he did last issue to keep things clear and exciting. He succeeds, wholeheartedly, and I’m not willing to lay any narrative struggles at his feet.

To further emphasize how deftly this book handles its social engagement and is aware of the potential pitfalls, the end of the book comes dangerously close to a canned moment of Cap “starting a discussion” on his airplane about social issues, a moment that could have been groan- and eye-roll-worthy. At the last moment, however, it avoids that rah-rah, Steve-Rogers-esque-moment and turns into the kind of frustrating and all-too-common argument with valid points but invalid yelling that is, frankly, for better or for worse, at our country’s ideological heart. What would have been a father clapping his son on the shoulder for saluting the American flag in a Steve Rogers comic in the 40s turns into people shouting at each other in coach in 2015 in a Sam Wilson comic. It’s the all-new status quo in a nutshell. (It helps further still that Cap basically says “I can’t even” and literally teleports off the plane and flies away.)

All-in-all, CAPTAIN AMERICA: SAM WILSON #2 is an excellent second-half of a one-two punch that brings Captain America into the 21st century. It looks as if things could get more streamlined in the third issue, but I hope, in so doing, it doesn’t lose its social edge. Setting up the world is one thing, but now it has to make sure Cap keeps living in it.