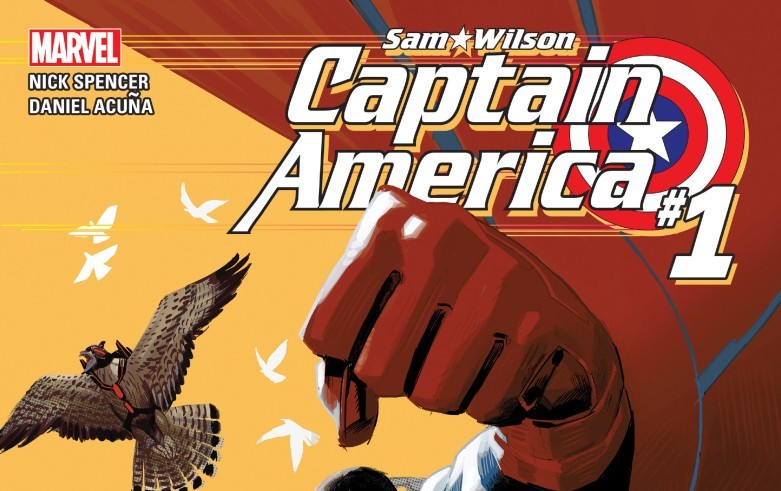 “Uneasy lies the head that wears a crown,” or in this case, the shield.

Sam Wilson is certainly as handy with the shield as Steve Rogers, but he’s learning the hard way that being Captain America is more than just being a soldier. He’s not making it any easier on himself either by diving shield-first into hot-button political issues. His most recent mission, however, puts him face-to-face with probably the last person he ever thought would be an opponent…

We meet up with Sam Wilson trying to settle into his role as Captain America. Like Steve Rogers says in THE AVENGERS, the stars and stripes, to Sam at least, are a little old-fashioned. What he means (and the thematic thrust behind the story) is that Captain America can no longer be just a symbol, not in this world. Sam Wilson believes Captain America can’t lead by example and inspire others to be better–well, he can’t do just that. The world such as it is requires more from Cap– it requires him to get his hands dirty.

And boy does it get dirty. 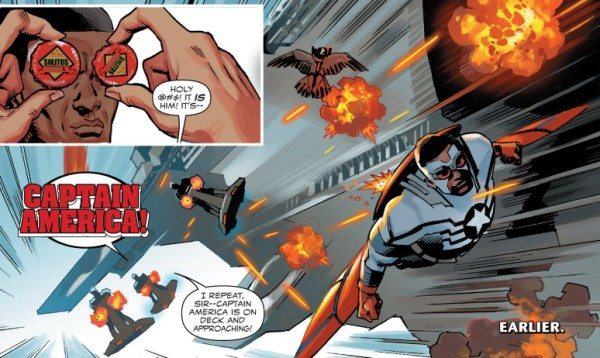 The world in which CAPTAIN AMERICA: SAM WILSON #1 takes place is meant to look like our own–and it does, frighteningly so. Sam Wilson bears the stars and stripes on his back amidst a country divided, a proverbial (and oftentimes literal) powder keg, and he sometimes comes too close to setting it ablaze. The fascinating part about CAPTAIN AMERICA: SAM WILSON #1–and where the drama really comes in–is that SamCap knowingly chooses a side. He acknowledges that Steve Rogers tried to stay out of politics, and respects that (Sam’s respect of Steve is well-highlighted here and is a welcome aspect of this issue’s character development), but he also acknowledges that when inheriting the title of Captain America, he also inherited a different world. It’s not the golden age of heroes, when a vigilante was welcomed and appreciated. Now, it seems, for every person Cap helps, there’s another two that think he overstepped, presenting a Hydra-esque monster of a challenge for him, a Sisyphean task of doing the right thing. Where Steve Rogers tried to move the world forward in the big picture, Sam Wilson feels the need to help one person a a time.

As you might expect, things get messy, and Daniel Acuña’s art supports that. It’s a wild, dynamic, sketch-like style that brings Phil Noto to mind. It certainly works for the action sequences, and even supports the tension and weight on Sam’s shoulders, but where Noto on, say, BLACK WIDOW, had the benefit of a color style that took advantage of his wild pencils to bleed out and create a complementary, dreamlike look, Acuña’s colors are a bit too grounded, and separate themselves from the pencils. There’s a case to be made for that being the point: the tension between the pencils and the colors representing the story’s tension–but that may be a stretch.

READ: Check out our review of the most recent issue of SECRET WARS!

It can veer into the sentimental, and the overwrought, and actually has some difficulty settling on what its tone is (some passages are very serious, while some venture towards slapstick), and a shakily non-linear narrative doesn’t really help matters, but that’s all okay. CAPTAIN AMERICA: SAM WILSON is trying something new, something bold, something ambitious, and it goes about it so well that you can forgive it some time to figure things out. This is Marvel’s truest attempt yet at being All-New, All-Different. 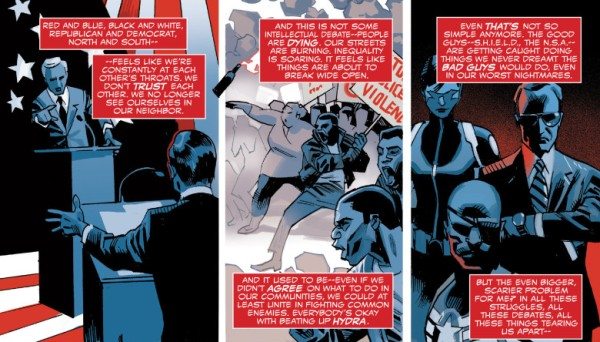 Tom Brevoort, who edited this title along with Katie Kubert, said of the upcoming event, “Avengers: Standoff”, that he thought of it as a response to the massive scale of “Secret Wars”. “Standoff” will be something more grounded, more about people, and what it’s like when heroes get back to the basics of saving lives. Clearly CAPTAIN AMERICA: SAM WILSON isn’t waiting for that event, and is making that stand now. It’s a brave start, and is definitely something to watch.