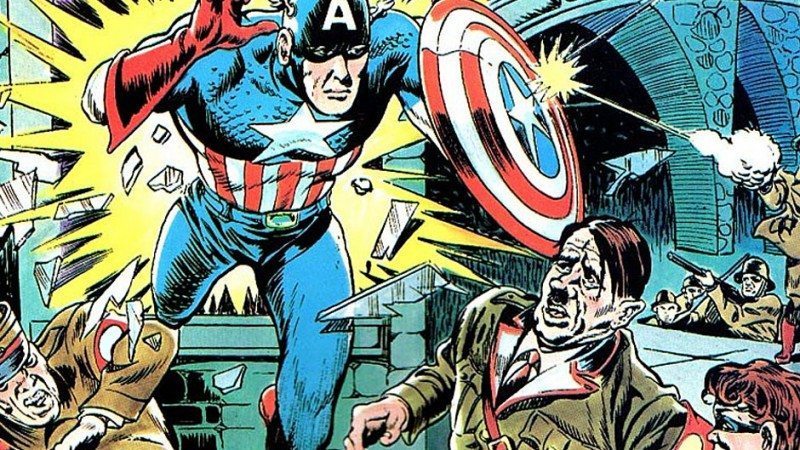 Steve Rogers (Captain America) does not like bullies. He doesn’t care where they are from. I do not like lazy writers. I don’t care what company they write for.

Oh yes, I am looking at you Nick Spencer.

Marvel’s most recent CAPTAIN AMERICA series ends its first issue with the idea that Steve Rogers has been a member of Hydra since the beginning. That’s right, the Star-Spangled Avenger, who knocked out Hitler 200 times, was secretly working for a Nazi organization the whole time.

This M. Night Shyamalan-esque twist is not only offensive, it is obviously a cheap ploy to garner more media attention (I know, I’m part of the problem). It’s a twist based in shock value, to get people talking about the new comic or at least to get noticed by mainstream media. The purpose of this twist isn’t based in the sanctity of good story-telling— it’s based in the desire for more attention (looking at you Jean Grey). Marvel executive editor Tom Brevoort said in an interview with Time, “Every single month whether it’s a run of the mill month for Captain America or an extraordinary month, our job is to put him in situations that place that character under some degree of pressure and see how he reacts to that. And hopefully our readers are surprised, shocked, elated, see something of themselves, learn something about themselves.”

While Brevoot would not call the move “a gimmick,” it’s definitely a calculated move on Marvel’s part. But this calculated move trivializes the real hardships faced by real people.

In a different interview with Entertainment Weekly, Brevoort states that, “There’s a certain responsibility to keep Cap’s adventures metaphorically grounded in the zeitgeist of the moment.” Which makes me wonder, what moment exactly are they grounding Captain America in? Is it the moment where according to the hate crime statistics gathered by the FBI, in 2014, 56.8% of hate crimes reported were motivated by “the offenders’ anti-Jewish bias?” Or is it the moment in France when anti-Semitic hate crimes doubled between 2014 and 2015? Or maybe the moment in London when Metropolitan police reported a 93.4% increase of anti-Semitic hate crimes in the 12 months prior to September 2015? Keep in mind that none of these figures take into account unreported crimes or countries that don’t make these statistics public.

I had always just assumed that when the moment came, Captain America would be on our side.

Here is the part where, if you want, you could try and argue that it’s only a comic book. It’s just a story that’s meant to entertain, or, in this case, shock people. But that’s not the case, and it never has been the case. Captain America, like all other comic book characters, is a symbol. He is a representation of certain ideologies and he can become a talking point for much bigger, real-world issues. He has always been a model of progressive, politically charged statements. Spencer himself said, “Captain America is not just one of the most recognizable faces in the Marvel Universe. He’s an inspiring figure, someone who brings people together.” But rather than try and confront the issue of prejudicial hatred with Cap’s usual finesse, Spencer has simply turned what could have been a scathing commentary on current events into another hackneyed, soon-to-be-undone comic book.

Spencer did his research. He “looked around in the real world at what’s driving recruitment into [ISIS and white supremacist groups]” to model Red Skull’s speech for the recruits. He could’ve easily left the story there, shaping Cap’s villains by the villains we have today. Spencer is politically active, according to Brevoot, and he knows what dangerous and inflammatory things are being said in the current race for the presidency. Spencer talks about political issues in a metaphoric way, which allows for parallels to be drawn intentionally. But what metaphor could possibly justify the erasure of Cap’s infallibly strong moral compass and the character’s origin? And what message does that send to the readers? That your heroes will inevitably turn against you?

Whether people realize this or not, all comic books have value beyond entertainment. They have a cultural currency that can bring people together or pull them apart. Comic books, like all other media, have the distinct opportunity to not only entertain the masses, but also educate them.

Steve Rogers is the product of two Jewish men who were standing up against Nazism before it was a communally held stance. But Jack Kirby and Joe Simon knew that they couldn’t stand by and allow their family and friends in Europe to get killed without saying something. So they made Captain America in direct opposition with the American policy of isolationism. Simon and Kirby received death threats for creating such a character and, in an ironic twist, Spencer is also receiving death threats for his creation.

But after America entered World War II, the people rallied behind Steve Rogers, the kid from Brooklyn, because he was a symbol of justice. He was just a normal guy who people could relate to and trust in his strong moral compass. That is his raison d’etre, his very essence, and to remove him from those qualities would be to destroy the character.

To be completely fair, this is not the first time that Captain America has been a Nazi. In 1979—CAPTAIN AMERICA VOL 1 #234—he was brainwashed into working for the Nazis. And let’s not forget TALES OF SUSPENSE #67: in a panel drawn by Kirby himself, Captain America salutes Hitler.

But it is important to note that these two instances happened well before the advent of the internet. Those comics are not the ones that the average person remembers today because the Captain America lore is so deeply ingrained in the notion of freedom and justice for all. But because of the internet and how connected we are on a global scale, this incarnation is a defining moment in Captain America’s history that will be immortalized online and that people will not necessarily forget.

READ: Interested in more controversy?  ‘The People v. Bucky Barnes’ have you covered!

This is a matter of trust and respect, neither of which Spencer seems to have for Captain America or the readers. This would’ve been a great opportunity to focus on new issues facing the public. This could’ve been a moment of growth and development for Steve Rogers, facing problems as a normal citizen rather than a superhero. But instead we get another “what if everything was a lie” situation. This kind of writing smothers potential. It allows writers to rest on the laurels of past accomplishments and storylines, abusing tropes, and belittling the struggles of real people.

Not too long ago, people were upset about the Maximoff twins in THE AVENGERS: AGE OF ULTRON and rightly so. Canonically, Wanda and Pietro are Jewish-Romani children of Holocaust survivors. But in the movie they are volunteers for Hydra, having no problem with their origins because they have been erased, just as the histories and stories of these marginalized cultures have been erased for decades. Or how about the time that Marvel released a comic about being a Hydra agent, HANK JOHNSON, AGENT OF HYDRA, a comic in which the reader is supposed to sympathize with Hank, the protagonist who works for a Nazi organization. The attempt at comedy falls short when you take into consideration that characters’ complex backgrounds are being erased, but an organization affiliated with the genocide of millions of people gets to make HR jokes.

As distasteful as all of this is, we can continue to voice our discontent with this choice, even if it plays into the marketing ploy or people are labeled as “overreacting.” To ride this out or to say nothing would allow comic writers to continue to write this lazy, contrived garbage. If nothing is said against it, the oppression of minority groups and the subversion of heroic ideals will continue. So, even if it’s only a trick—especially if it is a trick—people need to speak out against it.

That’s what the real Steve Rogers would want.