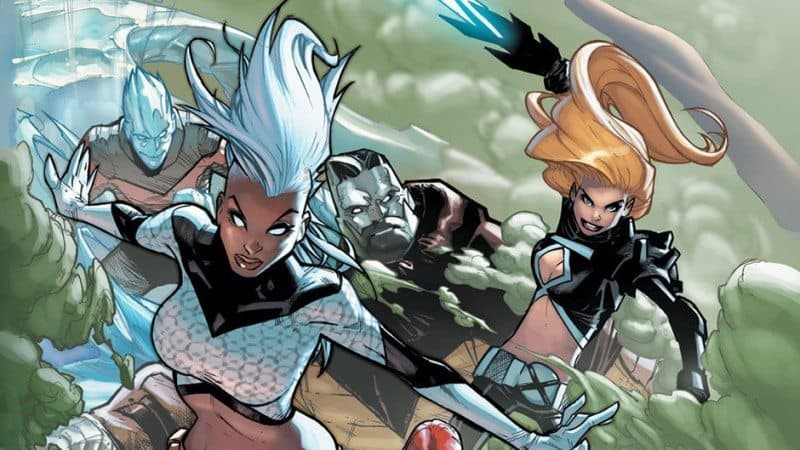 Ever since the first teasers about the All-New, All-Different Marvel, fans of the X-Men have watched with curiosity – and some concern.  We heard whispers that the mutant race would once again be brought to the brink of extinction, that key figures such as Cyclops have been taken out of play, and that the Terrigen Mists are responsible.  Now, with the preview art for EXTRAORDINARY X-MEN #1, we know a lot more…

What’s going on with the mutant race?

First, check out the previews: 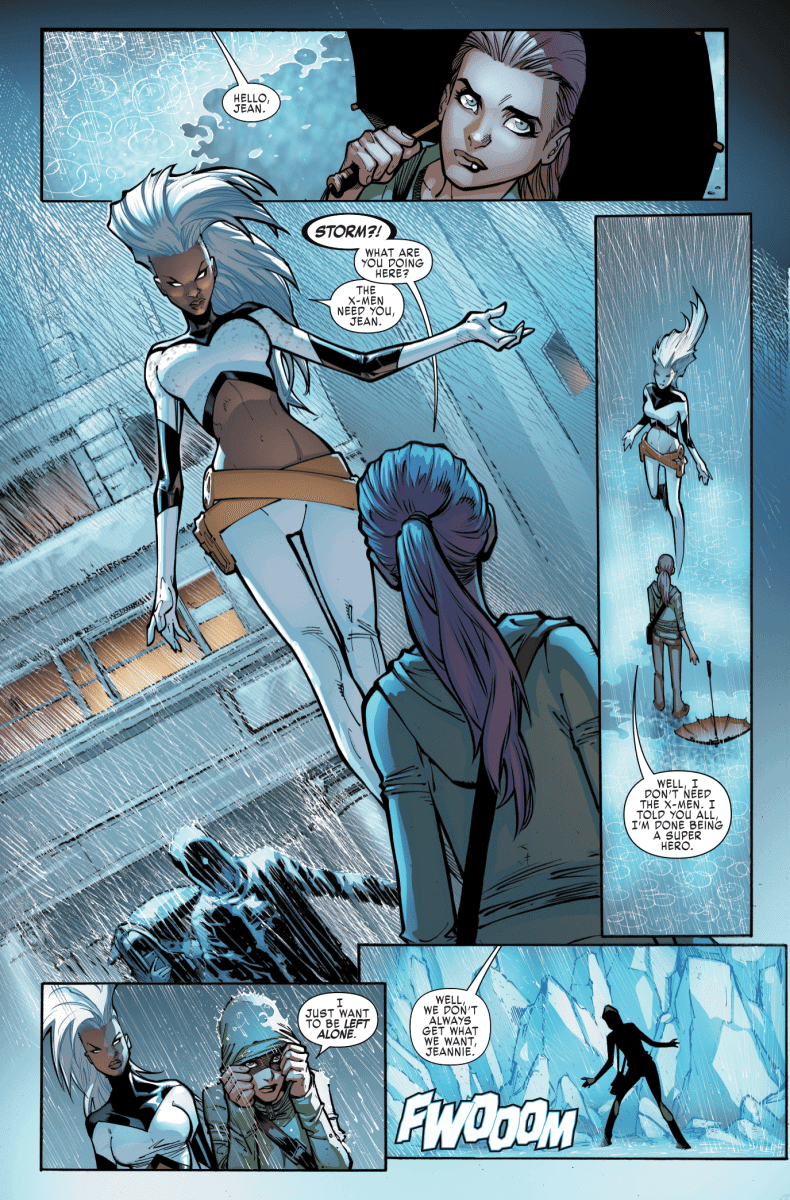 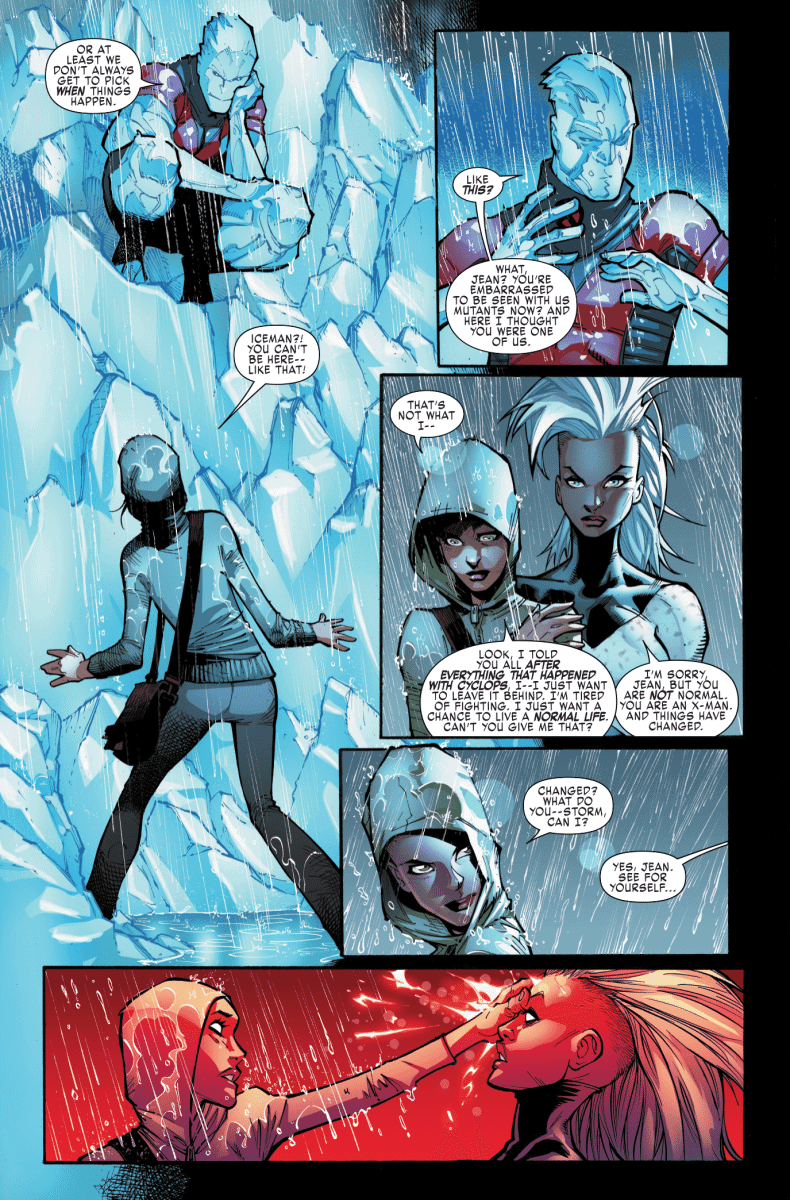 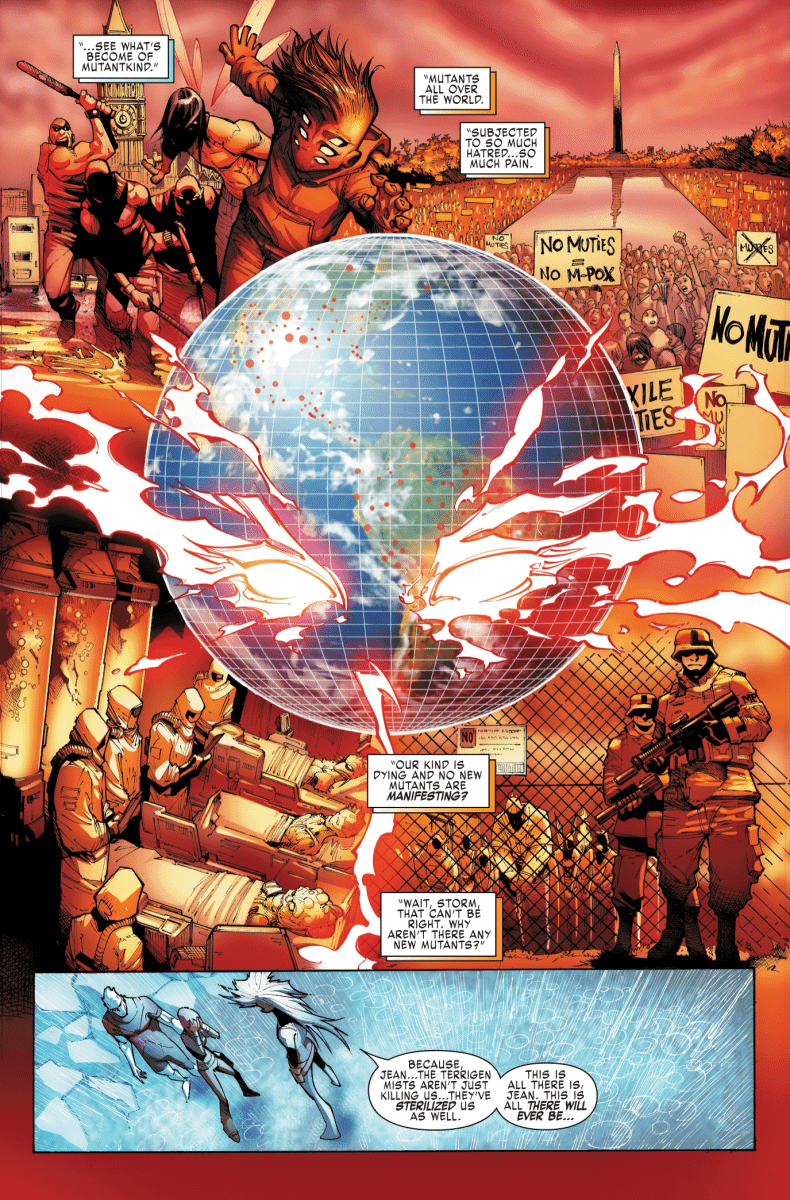 So there we have it.  The mutant race are about to be brought, once again, to the brink of extinction.  The Terrigen Mists – released across the world by Black Bolt in the “Infinity” event – react in a horrific way with the X-gene.  Many mutants are dying – presumably among the hospitalised we glimpse in Jean’s psi-scan.  No more mutants will be born; the X-gene is being suppressed.  The throwaway reference to an M-Pox suggests that the Terrigen Mist’s effects may make mutants somehow contagious, a threat to the human population around them.

Now, first of all, I have to say that the previews look outstanding.  Jeff Lemire has said he wants to write a run that will be remembered, that stands alongside the classics; he’s off to a good start, with this kind of writing.  And Humberto Ramos’ art is beautifully apocalyptic.  It’s easily some of the best art I’ve seen in an X-Men book for years, and I’m speaking as a fan.  So I have no issue with Lemire and Ramos; but I do have issues with the concept they’re dealing with.

How many times must the mutant race face extinction? 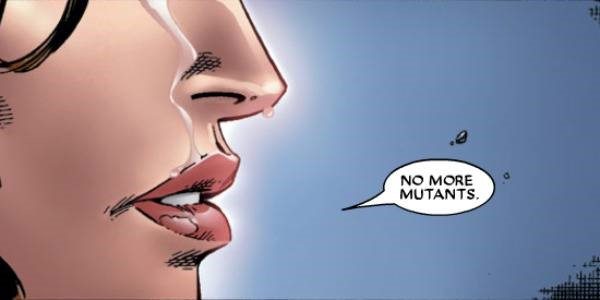 Contrary to popular belief, there was actually a time when the mutant race wasn’t forever balanced on the knife-edge of extinction.  That arc first began to come into play in the 1990s, when Stryfe tricked Sinister into releasing the Legacy Virus.  The Legacy Virus was a way of winnowing the mutant population down, and it was done with style; a metaphor for the HIV / AIDS epidemic, it was only when the Legacy Virus became transmissible to humans – in the person of Moira MacTaggert – that the news broke.  Anti-mutant violence reached a new peak, and the X-Men looked further than ever from their goal of peace between men and mutant.

Ultimately, of course, that dangling plotline was resolved with the death of Colossus, after the dying Moira inspired Beast’s creation of an antidote.  Ironically, Scott Lobdell had plotted a possible resolution that was far less angst-filled back in EXCALIBUR #80, but the mid-90s Marvel chaos meant that was quickly forgotten.  Stryfe implanted the knowledge that could have cured the Virus in his operative Zero, who in turn passed it on to Douglock… who did nothing with it, nor did the agents of Black Air who drew that data out of him in EXCALIBUR #98.

The 2000s brought another near-extinction threat; the Decimation.  Wanda Maximoff, the Scarlet Witch, launched an insane curse upon the world – “No more mutants.”  Across the planet, mutants were depowered, leaving only a handful with their abilities.  New mutant manifestations came to an abrupt end.  To this day, the name of the Scarlet Witch remains a curse for many X-Men fans.

READ: NO MORE MUTANTS! – Why the X-Men need to stop creating new mutants…

This time, the central goal was simple: to dramatically reduce the number of mutants, restoring them to the 1960s status quo, where being a mutant was unusual.  Unfortunately, the Decimation was quite badly-handled by writers; over on MahMuseComics, I argued that it could only be a failure.  Writers kept on introducing new characters anyway, finding ways around the editorial fiat – characters large and small, from Greymalkin to Vulcan, were created.  Meanwhile, if the focus was to reduce the cast, why did the writers keep on bringing people from the dead?  And if the cast had been reduced so much, shouldn’t we have seen a much narrower focus?  Instead, characters like the New X-Men continued to drift in and out of comic book limbo, while the X-books focused on the usual main suspects.  Finally, “Avengers Versus X-Men” resolved this plotline, restoring the mutant race.

Let me be clear: “Avengers Versus X-Men” brought this arc to a head in 2012, restoring the X-gene, and reigniting the mutant race.  No proper mechanism was really explained, with the culmination of years of X-Men storytelling forced into the straightjacket of the summer event.

So… is this whole plot just a rehash? 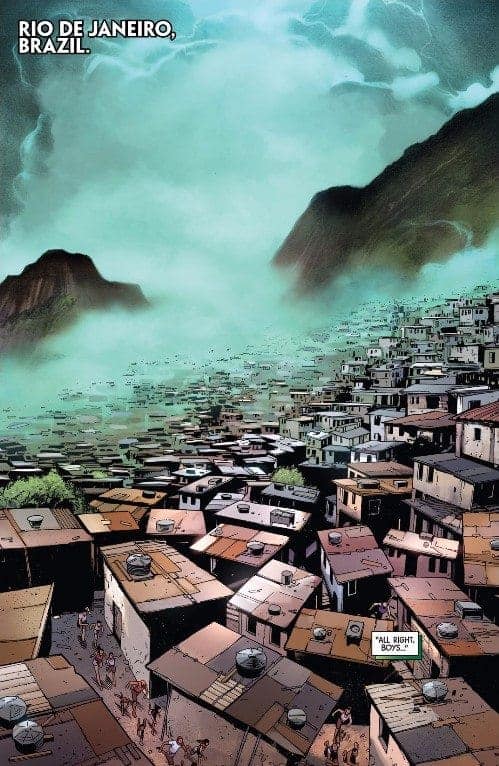 It’s undeniable that there are similarities here; the hint of the M-Pox is reminiscent of the Legacy Virus, for example, while the broader concept seems fairly similar to the Decimation.  But there are key differences.

First of all, the Decimation was really quite conservative.  It reduced the X-Men down to their core team, with only fringe groups and fringe characters losing their powers.  None of the original X-Men were affected (Iceman briefly thought he was, but his depowering was reversed as psyhosomatic).  None of the Second Genesis X-Men were depowered.  Of the 1990s Blue and Gold Team lineups, only Jubilee – by then a side-character who the comics had essentially forgotten, much to my irritation at the time – was depowered.  In contrast, whatever’s going on here has taken Cyclops out of play, and given his importance to the mutant race, that’s pretty significant.  This time round, Marvel are pulling no punches.

Both the Decimation and the Legacy Virus were introduced by characters who were then removed from the game.  The Scarlet Witch disappeared until the superb CHILDREN’S CRUSADE, while Stryfe and Cable tumbled into the time-space vortex at the end of the “X-Cutioner’s Song” event, and were both believed to be dead for a while.  Instead, the Terrigen Mists were unleashed by Black Bolt, who remains a significant player in the Inhumans world.  These mists are also tied to the rest of the Inhuman race, and it seems that they’ve welcomed the Beast into Attilan as he strives to find a cure.  The fact that the Inhumans – an expanding race – are major players in the Marvel Universe ups the ante quite effectively. 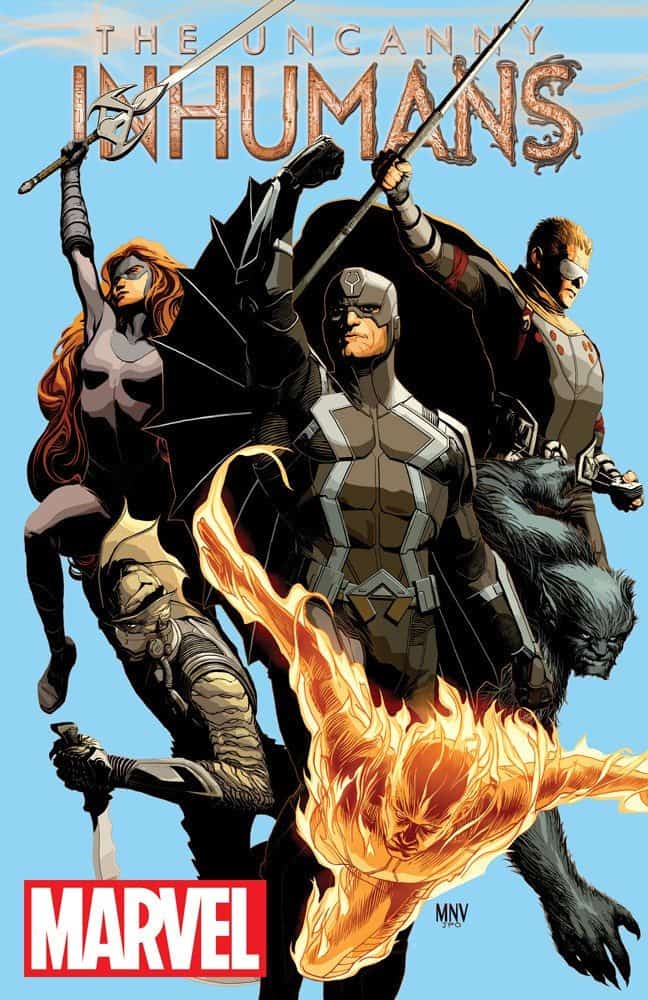 Finally, whatever Marvel are working on here seems to be for a very different purpose.  They’ve deliberately woven a plot that brings the mutant and Inhuman races into collision – that seems to be their goal, rather than just to reduce the number of mutants.  It’s a disturbing play.  For several years now – since just before “Infinity”, in fact – X-Men fans had been expressing concern that the mutant race would be superseded by the Inhuman race.  Marvel have seemed willing to allow this to run on, and this risks fanning that into flame.  They’re evidently betting that they can use the passion of X-Men fans as a marketing tool in its own right, but I’m slightly concerned that this could backfire.  It all depends on how the concept plays out, and what state the X-Men and the Inhumans are left in when we come to the close.

READ: Who are THE INHUMANS?