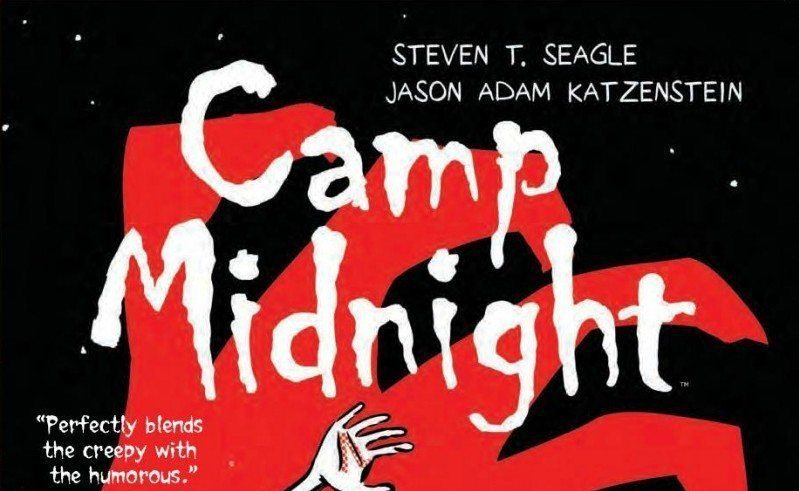 It’s a rite of passage–the fiery crucible of adolescence where campers enter, pimple-faced and naive, and exit having forged the identity they’ll be known for throughout high school: the nerd, the jock, the hot girl, the guy who bombed so goddamn hard trying to cover “Wonderwall” at the camp talent show (me). There’s nothing more representative of the experience growing up as an American youth than a summer spent in woodland isolation with other smelly tweens, each one trying to find themselves and hoping to make-out with someone along the way. That’s why summer camp has defied becoming a narrative platitude despite being written about so often. We all have summer camp stories, so we love reading them.

The anxieties of summer camp are channeled in Image Comics’ new graphic novel CAMP MIDNIGHT. Written by Steven Seagle (BEN 10, BIG HERO 6) and drawn by (spoiler: brilliantly talented) newcomer Jason Adam Katzenstein (THE NEW YORKER), the comic tells the story of Skye, a girl whose negligent step-mother ships her off to the wrong summer camp–a summer camp for monsters! 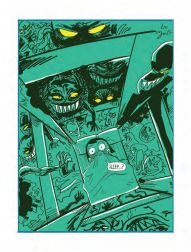 From cover-to-cover, CAMP MIDNIGHT is a visual joy. This is Jason Adam Katzenstein’s first foray into full-length comics, and in CAMP MIDNIGHT, he establishes himself as an illustrator to watch for years to come. His sketchbook stylings evoke the frenetic, adolescent energy of the book’s protagonists, all the while reminding readers of the naivety that necessarily underscores a coming-of-age story. Where a less adept artist might struggle with such a minimalist format, Katzenstein expresses characters and settings with incredible depth and whimsy. As the book’s colorist, he also uses variable palettes to complement the tone and action of each panel. All in all, his work makes CAMP MIDNIGHT one of the most visually pleasing books I’ve read this year.

Thematically, Seagle uses the world of monsters as an allegory for the teenage experience, namely, the experience of being an outsider. To kids struggling to fit in, the world can seem a strange and hostile place. They might see ‘monsters’ in the people around them, especially the people that make them feel different. Beautifully, CAMP MIDNIGHT warns readers that the only monsters worth fearing are the ones that live within us. The vampire of self-doubt is far more menacing than the phantoms of gossip or social exclusion. Ultimately, learning to love yourself, talons and all, is the bravest thing you can do. 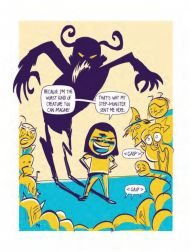 When Seagle and Katzenstein design main characters, they hit home runs. Skye, the protagonist, is insightful and adventurous—an embodiment of the rebel everyone wanted to be when they were younger. Importantly, she’s also sensitive beneath her bluster; Skye is never as self-assured as she wants her enemies to believe. Though this insecurity doesn’t often manifest, and could have been explored further to make her character more relatable, Skye’s vulnerabilities in conjunction with her acidic wit ensure she will resonate with any reader.

Skye’s fast friend at Camp Midnight, Mia, quickly became one of my favorite characters in the book. She’s sweet, caring, and gentle. I honestly recommend reading CAMP MIDNIGHT just to get the chance to meet her. I saw so many aspects of people I’ve known and loved in her portrayal.  She’s that quiet, gorgeous, insecure-yet-perfect person that doesn’t realize she’s a wonder. Her inability to see the beauty in her own reflection and the innocence in that self-doubt make her fragile in a heart-breaking way. Seagle writes Mia so convincingly, and Katzenstein’s evocative illustrations combine to make her one of the triumphs of the book. 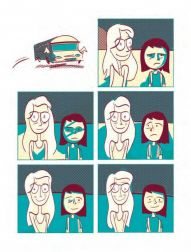 That said, Mia and Skye feel like the only dynamic characters at camp that summer. Secondary characters, like the novel’s antagonists or even Skye’s romantic interest, a swarthy teen-wolf, seem generic and monotone. Where CAMP MIDNIGHT succeeds with humorous dialogue and two compelling lead characters, its narrative structure leaves something to be desired. The plot rambles, with a thin climax and relatively few high-stakes conflicts. Moreover, the camp itself feels more like a set-piece rather than a living world. I didn’t get the sense that Camp Midnight was a thriving, functioning society outside of the isolated environments where Mia and Skye debate their identities or clash with unfriendly campers. This feeling was amplified when the plot introduced camp traditions as significant challenges to be overcome (notably, the Big Games at the end of the book) without alluding to these beforehand.

Moreover, the comic left me questioning whether the monsters at the camp were actual creatures or the projections of Skye’s anxieties. Characters would change between neighboring panels from saliva-drooling ghouls to average-looking teenagers, which led me to believe that the ‘monster’ aspect of the story was primarily metaphoric. This interpretation was furthered by one of the first major images of the novel, in which Skye looks at her step-mother and sees a wraith instead of a woman. Then again, at Camp Midnight, there are certainly moments where it seems Seagle is writing towards the monsters being actual supernatural entities. Is Skye seeing people as the monsters they are or the monsters she fears them to be? Are the campers truly monsters? This ambiguity was never fully resolved, and, I believe, was a difficulty that added confusion rather than nuance to the premise. 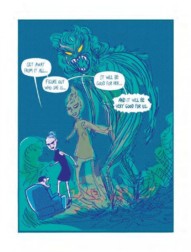 Most importantly, and regrettably, the conclusion of CAMP MIDNIGHT was witheringly abrupt. Strangely, it felt like the writing was more hurried in the final 30 pages of the comic than anywhere else. Mia, who I had grown to love over the previous 200 pages, finally reveals her true form, but instead of a show-stopping conclusion where the themes of the book come together, the character arcs we’ve become invested in are swept under the rug. After a brief sequence where Skye and Mia joyfully compete in the Camp Big Games, for the first time free to be themselves, Mia simply floats off into the sky. Skye and Mia say a brief goodbye, but this exchange is jarringly passive and devoid of any new insights. It was a shallow send-off to the deep friendship we watched develop across the preceding 200 pages and left me wishing there was another ending somewhere.

CAMP MIDNIGHT is a visually stunning, if not narratively stunted, journey that deserves your attention. Seagle’s ability to write clever dialogue and Katzenstein’s brilliant illustrations make it worth the read. Skye and Mia are a wonderful team, and their journey to embrace their inner truths is something with which every reader can empathize. More importantly, CAMP MIDNIGHT evokes the excitement and mystery of the days we spent figuring out what it means to grow up. In this way, CAMP MIDNIGHT has something to offer old monsters and new.