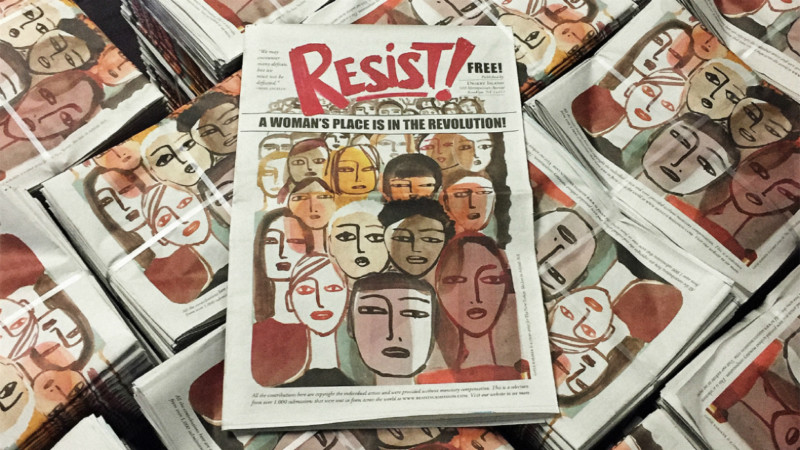 The Revolution may not be televised, but it will be drawn. Will your art be a part of it? RESIST! is calling for submissions of political comics, cartoons, and images. Submit by Friday, April 21st, 2017 for inclusion on their website and, possibly, in RESIST! VOLUME 2, a comics newspaper to come out spring/summer of this year.

RESIST! is the brainchild of its editors, the mother-daughter team of Françoise Mouly (co-editor/co-publisher of RAW, art editor for THE NEW YORKER) and Nadja Spiegelman (author of I’M SUPPOSED TO PROTECT YOU FROM ALL OF THIS). Shocked and angered by Trump’s election and the rise of misogyny in the wake of his successful campaign, the duo transformed their strong feelings into more powerful actions. Mouly and Spiegelman spent the weeks between Thanksgiving and January 21st calling for art to be published online and in a comics newspaper to be handed out for free in Washington D.C on the day of the Women’s March. Their slogan is “WOMEN’S VOICES WILL BE HEARD!,” and their voices were not only heard but amplified.

READ: Want more political art? Check out our coverage on the upcoming SH*T MY PRESIDENT SAYS: THE ILLUSTRATED TWEETS OF DONALD J. TRUMP!

They received thousands of submissions from artists of every gender, race, nationality, sex, and professional level. Their cause was reported in such disparate news sites as VICE, VOGUE, and THE WASHINGTON POST. Accepting online preorders and donations to cover publishing costs for an initial 20,000 issues, they collected over $10,000 to publish 60,000 issues. RESIST! was distributed to multiple Women’s Marches and comic shops across the country through a volunteer network. With RESIST! VOLUME 2, Mouly and Spiegelman will continue to give away their comics tabloid for free and sell advanced copies, but this time with publishers in the US, UK, France, and Germany. Their voices were heard — now they want to hear yours.

The theme for RESIST! VOLUME 2 is “Grab Back!” While the RESIST! team says, “Every recent news headline can be a starting point for resistance,” some suggested topics for works include Black Lives Matter, The War on Science, Climate Change, Russia, Gay and Trans Rights, Build the Wall, and Reproductive Freedom, among others. Generally speaking, this is what RESIST! wants:

We are looking for personal stories told through comics and strong poster-like images. We are looking for idea-pictures that provide emotional and analytical commentary. We have an unabashedly liberal bent – and we may be preaching to the choir, but we want the choir to know their song is worth singing.

For more of an idea on what RESIST! is looking for, check out their Tumblr page. The online submission form can be found here. All are welcome to submit.