For those of you who are not aware, The Chicago Comic & Entertainment Expo, or C2E2 – is another comic book and pop culture convention put on by ReedPOP, the same group that organizes NYCC and Special Edition: NYC. C2E2 has an extensive schedule of panels and workshops, as well a diverse guest list and a sprawling artists alley.  C2E2 is a young convention, starting in 2010, and it’s just now entering its fifth year.

I arrived at C2E2 a little later than I would’ve liked. By 10:30 am, there were already massive throngs of people on the festival floor, and there was nary a corner in McCormick Place where the decibel level dropped below a dull roar. I made it through security at C2E2 without receiving any strange looks. I was rocking a foot-tall Mohawk, and clad in a spandex Spider-Man costume, a spiked black denim, and clunky boots. In other words, I, in my Anarchic Spider-Man cosplay, was one of the more tamely dressed attendees at this year’s C2E2. 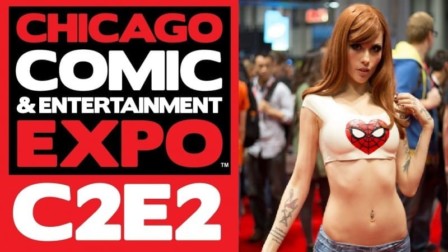 The Anarchic Spider-Man is a character created by Dan Slott and Olivier Coipel for inclusion in one of the biggest Marvel events of this past year: The Spider-Verse. If you’re unfamiliar with the Spider-Verse, it revolved around the revival of an old Spidey villain named Morlun, and the introduction of his family, the Inheritors. The seemingly invincible Inheritors sustained themselves by hopping between dimensions and feeding on the life force of animal totems. Their favorite meal? Spider totems. Dozens of different existing iterations of Spider-Man and a handful of new ones banded together to fight for their collective lives. Spanning a whopping thirty issues (including tie-ins), the SPIDER-VERSE event introduced an alternate universe’s Gwen Stacy as Spider-Woman in a prelude issue. The issue was so wildly popular that it spawned a whole new series, titled SPIDER-GWEN. Given the buzz surrounding the SPIDER-VERSE, it came as no surprise that C2E2’s list of comics guests included many names from Spider titles.

I came to C2E2 armed with a backpack full of comics and a few bright-eyed, most likely misguided questions to ask my favorite creators regarding getting a foot in the door of the comic book industry. I started the day with Humberto Ramos, known for his work on THE SUPERIOR SPIDER-MAN, the last run of THE AMAZING SPIDER-MAN as well as the first few issues of the current one. Ramos is known for his vehement dedication to near-comical proportions of the figures he draws. His thick-necked Wolverine and lanky, emotive Spider-Man characterized the SPIDER-ISLAND story arc of THE AMAZING SPIDER-MAN. Ramos was set up in C2E2’s extensive Artist’s Alley surrounded by a flock of fans waiting to have their copies of THE AMAZING SPIDER-MAN signed. Later in the day, they’d no doubt be taking them over to the Marvel booth to get them signed by Slott as well. I left beaming, clutching THE AMAZING SPIDER-MAN #5 (Silk’s first appearance!) close to my chest.

READ: Want to learn more? Check out our overview of C2E2!

Around midday I made my way over to the Marvel booth to get a good spot for Jason Latour, Robbi Rodriguez, and Dennis Hopeless’s shared signing slot. Almost every member of the crowd was carrying a copy of EDGE OF THE SPIDER-VERSE #2, the first appearance of Spider-Gwen –an issue so wildly successful that it went back to print five times and spawned its own full series, or SPIDER-WOMAN #1, Hopeless’s first issue with the title.

The team of Latour and Rodriguez sat patiently through the heaps of comics people were piling in front of them. Their workload turned their table into more or less of an assembly line, you put a number of books on the table, exchanged pleasantries, they both signed what you placed in front of them, and then you were ushered down to the other end of the table.

Dennis Hopeless’s stint as writer for SPIDER-WOMAN began in its current run, in which she leaves the Avengers and becomes a private eye. The first issues after the end of the SPIDER-VERSE revolved around the transition from Avenger to vigilante, in a world that demands bureaucracy. Also on Hopeless’s watch, Jessica Drew got a long needed change of costume. This is most likely in response to the negative press relating to a variant cover of SPIDER-WOMAN #1 that a large portion of the comics community deemed unnecessarily sexual. 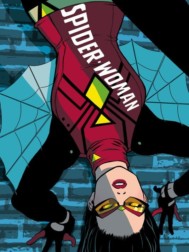 I managed to ask him how he got his start in comics, to which he replied; captioning doodles. While working at a comic book store, he would caption the doodles left by a friend of the store’s owner whenever he came in. Eventually, the artist of the doodles saw Hopeless’s additions and prompted him to write scripts. After finishing enough issues for a TPB and shopping it around to various publishers, that was it, he had credentials. Less than five years separate his first release (GEARHEAD via Arcana Comics) and the start of his work at Marvel. While not a meteoric rise to prominence, Hopeless never disappoints and is certainly one to watch.

Later that afternoon, I got in line to see the biggest name in Spider-Man; Dan Slott. Slott is the genius behind last few years of THE AMAZING SPIDER-MAN, and the true Master Weaver of the SPIDER-VERSE. I got in line almost an hour before he was slated to appear, and I still found myself closer to the center of the undulating mass, once the event got underway. Despite having to sign autographs for over an hour, Slott was incredibly upbeat and cordial. When I finally got to the table, he saved me any embarrassment that whatever painfully awkward introduction I would’ve made could’ve brought me by promptly asking to take a picture of my take on the Anarchic Spider-Man for Instagram! 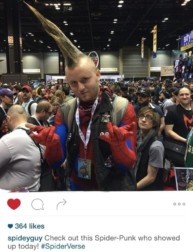 Even omitting the creative minds behind the slew of Spider comics, C2E2 2015 had a phenomenal guest list that spanned a wide variety of mediums and appealed in some way to everyone’s tastes. Assuming C2E2’s growth from 2014 to 2015 holds true, there’s bound to be big things in the work for C2E2 2016. I’m already excited!