BY CHANCE OR PROVIDENCE hits the comics stands on the 26th of July. Written and illustrated by Becky Cloonan (PUNISHER, SOUTHERN CROSS, GOTHAM ACADEMY), with colors by Lee Loughridge (SOUTHERN CROSS, CRY HAVOC) and lettered by Rachel Deering (THE SHIELD, ANATHEMA), BY CHANCE OR PROVIDENCE is a comics anthology that weaves magic, love, curses, and the unknown through its pages. It’s also filled with Cloonan’s sketches and illustrations as back matter. With it launching at the end of the month, we talked to Becky Cloonan about her book.

ComicsVerse (CV): For those not in the know, would you be able to tell our readers what BY CHANCE OR PROVIDENCE is about?

Becky Cloonan (BC): This book is a collection of three short stories: WOLVES, THE MIRE, and DEMETER, linked in both setting and tone. They are inspired by different kind of folklore; werewolf curses, will-o-the-wisps, selkies, ghosts. I suppose they are all romantic in their own ways, and maybe a little haunting, and a little sad. I was trying to create stories that would stay with readers after they’ve closed the book.

CV: WOLVES, THE MIRE, DEMETER were originally self-published as one-shots. Was it always your intention that these would be a trilogy or did that evolve over time?

BC: When I started working on WOLVES, I didn’t know I had so many stories like this in me! The idea of a collection evolved on its own. A few years ago I self-published a hardcover edition of this book, although in black and white and in super limited numbers. It sold out in a few weeks, and I guess I’ve just been waiting until it felt right to release a paperback edition. 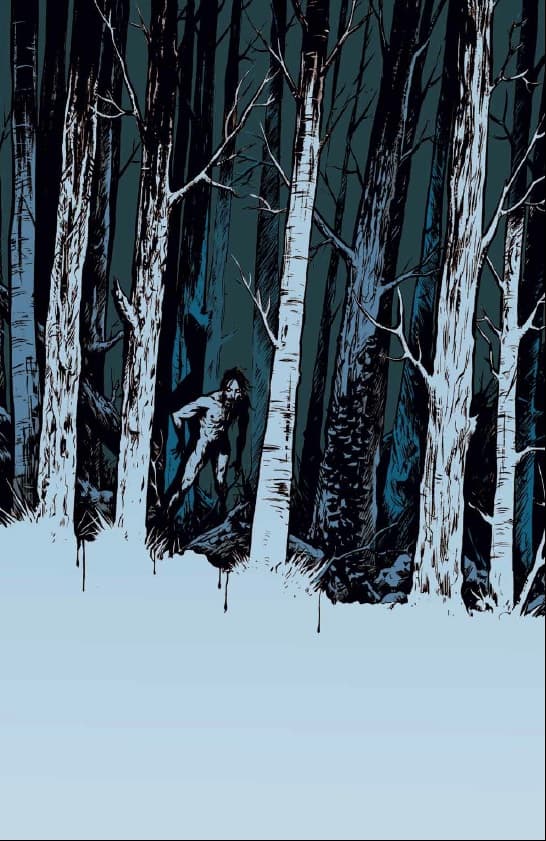 CV: WOLVES leaves the reader with some questions, including the identity of the werewolf. I could take a very educated guess on who it was, but what was the idea behind not making it too clear cut? And how much can you trust the reader to fill in the blanks?

BC: I didn’t want it to be too on the nose, and I enjoy hearing people’s theories! I also love endings that leave you satisfied, but still curious. Even if you think you know who the werewolf is, you might think twice about who is actually cursed.

READ: Get in on the ground floor with our review of THE PUNISHER #1, written by Becky Cloonan!

CV: Like WOLVES, THE MIRE and DEMETER are all bound by the themes of doomed love (whether romantic or otherwise). What were your literary or comic influences when examining love from a darker angle?

BC: Besides my own personal wretched excuse for a love life, I’m a big sucker for gothic tales like JANE EYRE and WUTHERING HEIGHTS, and also sad folktales and mythology. The triumph and tragedy of King Arthur, the poetry of the Pre-Raphaelites… I try to take the ideas and feelings I get from the art that inspires me and wrap them around characters that will hopefully convey those feelings to the reader.

CV: Have any of the stories changed since their original print run? Was there a temptation to re-edit them?

BC: I’ve edited WOLVES a bit, I went in and added pages. I did the same for DEMETER, redrawing some panels and reworking the ending to make it a little clearer. I did have to exercise a bit of restraint not to go wild with that stuff, though. It’s a rabbit hole! The biggest change from the originals is Lee Loughridge on colors!

CV: How did the publication of the book come about? Why go with Image as the publisher?

BC: I’ve been talking with Image for a while about publishing a paperback edition of this book, so I guess it was just a matter of time! I’ve loved working with them on SOUTHERN CROSS, and it just felt like the right place for this book. 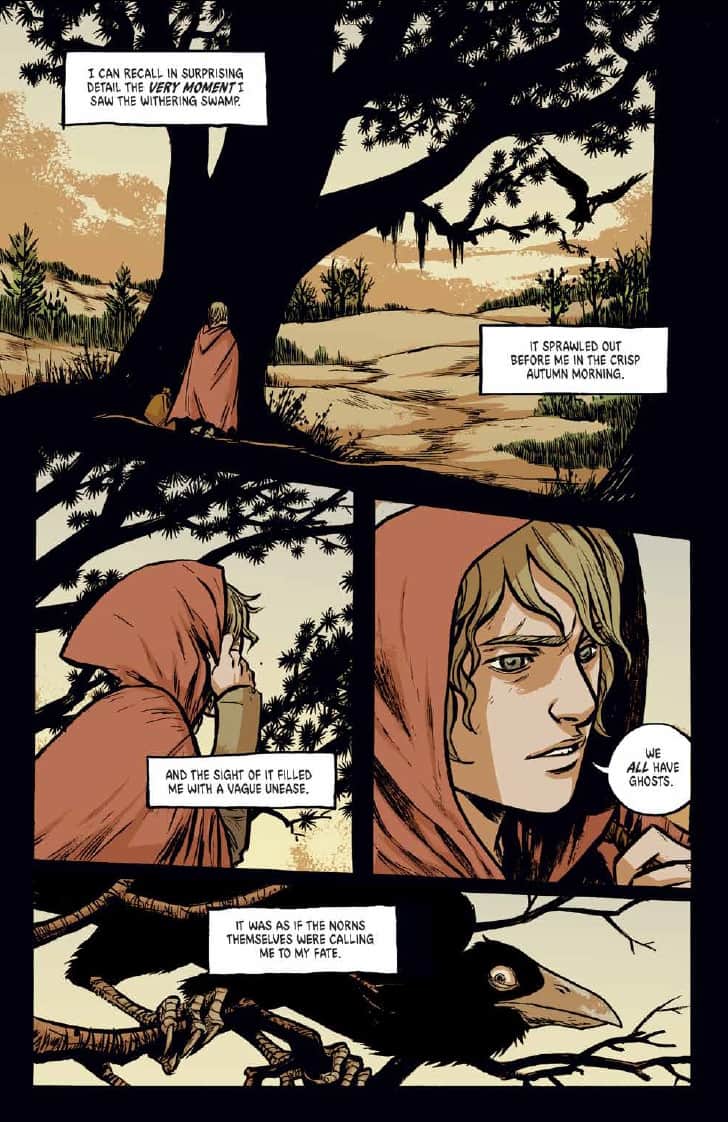 CV: What do you think colorist Lee Loughridge brings to BY CHANCE OR PROVIDENCE?

BC: Lee did a masterful job on this! He also colors SOUTHERN CROSS, so I’ve seen his work transform Andy Belanger’s art from something that is stunning into something otherworldly. He does such a good job setting a mood, creating tension, changing scenes — getting Lee on board was a no-brainer. I’m lucky he said yes!

I also got Rachel Deering to re-letter the book as well, she is a total badass with an incredible sensibility and sensitivity to how a book should feel, and she did a great job keeping the integrity of the original while bringing in a breath of fresh air to it.

CV: The overall feel of the book, in my opinion, conjures up a Gothic romance/horror feeling. What is it about that period of literature and time that appeals to you?

BC: I don’t know if it’s something I can put my finger on, exactly. I’ve always responded to fantasy novels, period pieces, for whatever reason. The sensibility, the aesthetics, it all just speaks to me. Maybe I am just happiest when my characters are at their most tragic, I dunno! 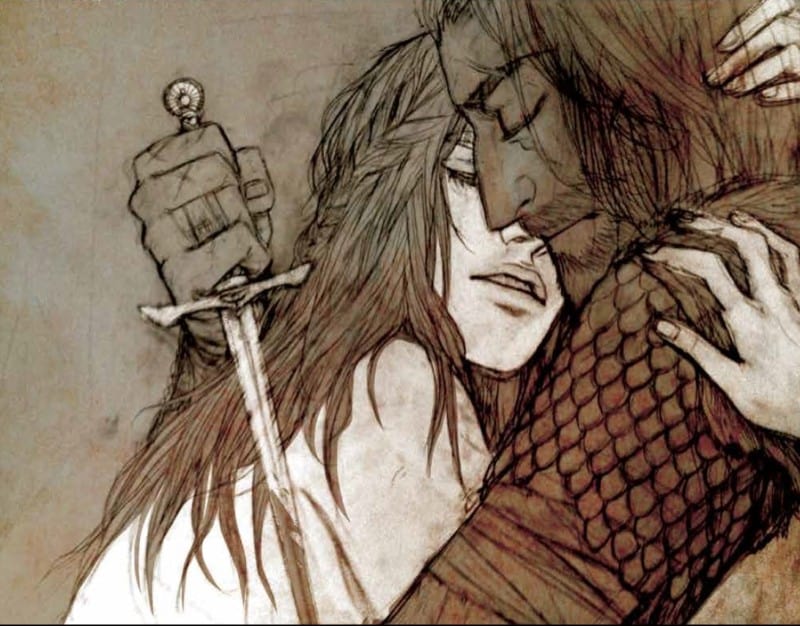 CV: Artistically, this is a sublime work of art. Process wise, how much time and work go into a book like this? What references and research did you use?

BC: Thank you!! I mean that. These books were done in between working on other books, so they took a little longer than usual. I think DEMETER took the longest at a little over three months. They are all strangely personal stories, so there’s that to contend with, making them a little harder to get right. Then there’s the fact that I’m writing and drawing it all, so I obsess over every detail. That doesn’t help either! My mood tends to suffer a bit and I’m both super inspired and excited, but also miserable.

For research, ok get this — the castle in THE MIRE is based on a real place — Raglan Castle, in Wales. I went and took a ridiculous number of photos in case I’d ever need it for reference — three years later, voila! Sometimes you know you need the reference photos before you even think of the comic.

READ: We talk to the creative team of CROSSWIND; Cat Staggs and Gail Simone!

CV: Your dedication at the start of the book states ‘Dedicated to those with crushes on your characters.’ Can creators fall in love with what they have created?

BC: Falling in love with your characters is crucial. If two characters are supposed to fall in love and you don’t feel it, how will you convince your audience? They have to feel it too. You need to know them, feel like you can tell them things, get nervous around them… When I go back and draw characters I haven’t drawn in awhile I feel like I’m revisiting old friends, and I miss them. Then again, maybe I just go way too far with this stuff. They keep me up at night. And sometimes, on really good nights, I even dream about them. 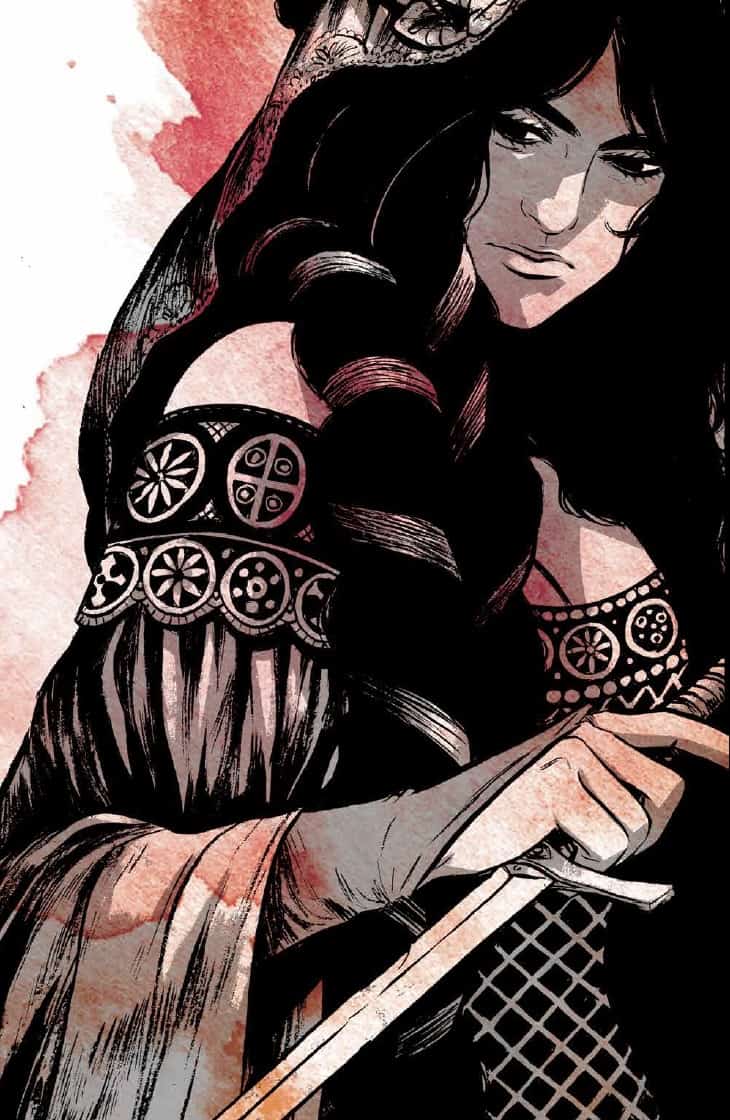 CV: Of the three stories, is there one that stands out and speaks to you?

BC: I think THE MIRE is the one that I am the most proud of, DEMETER is embarrassingly personal (not that anybody would know just to read it), but WOLVES is the one that is closest to my heart. I have two other stories to tell to complete the cycle, one about the King, and one about the Queen. It’s super tragic, ha ha ha!

CV: What projects can we look forward to seeing from you in the future?

BC: Aside from BY CHANCE OR PROVIDENCE, SOUTHERN CROSS volume 2 comes out July 26th! Andy and I are working hard on the third and final arc. I’m on a few more issues of PUNISHER with Matt Horak, and GOTHAM ACADEMY is wrapping up the second semester as well. It’s a little exciting, and a little scary — everything is ending! After that… Who knows? More comics, probably.

CV: Thank you so much for your time.

If you would like to keep up-to-date with Becky’s work, you can follow her on Twitter, @beckycloonan, or visit her website here. BY CHANCE OR PROVIDENCE will be on sale the 26th of July.