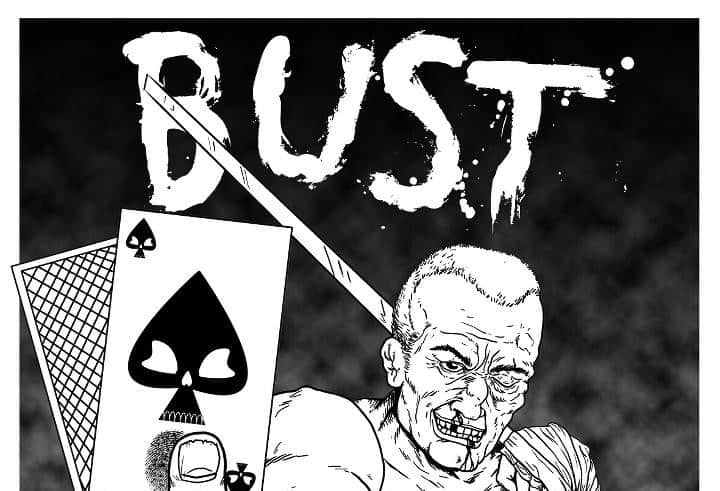 It’s a zombie world right now.  Whether you’re talking movies (World War Z, 28 Days Later) or the hit AMC program The Walking Dead, the zombie genre is alive and well!  But Bust is something very different to all those other stories, and today I’m interviewing writer and creator Dave Cook to show you why you should check it out!

Up until summer 2014 I had been a videogame critic for the best part of a decade, but I decided to leave the industry for a career change and focus on writing comics. During that time I saw the whole game Kickstarter phenomenon unfold, I interviewed countless developers about their crowd-funded projects and learned so much about how the whole process works from beginning to end. I ended up going with this platform because I had tons of insight from the game studios I had spoken to, and already had a good handle on how to run an effective campaign. I only had one six-page comic short published before sitting down to write Bust, but I’ve had so much brilliant advice from many incredible people working on indie and big comics that I felt confident enough to give it a shot. The fact that we hit our Kickstarter goal in less than a fortnight was just so unexpected and I still can’t get over how much support we’ve had from our backers. I owe them all so much for their generosity. Thank you guys!

I think having a bit of notoriety in the gaming press certainly helped. Before I quit the industry I was deputy editor at the brilliant VG247 and had a few industry awards to go on, so a good number of our backers knew me through that work. But it’s when complete strangers started backing us that I knew illustrator Chris and I were onto something. I managed to spread the word to those new guys by being active on Twitter, starting an official Bust blog and Facebook page, as well as pitching coverage to comic sites. The amazing team at Big Glasgow Comic Page and the awesome v  Panels and Pixels covered us, and I pitched a column about the comic to Bleeding Cool and incredibly they said yes. I think being slightly spamming on social media helps but it’s also important to not overdo it.

I’m a big fan of bloodsport films like The Running Man and Battle Royale so I wanted to create something like that, but I also wanted to wrap it around a hero who was utterly flawed – a terrible person who has done awful things, but who you still want to see succeed. The original Bust story was about a card dealer and con man called Frank who stole money from the casino where he worked and bought himself into a mob-run card game, only to discover that his boss Eddie is also playing at the table. Eddie recognizes Frank, figures out he stole the cash from his vault and kidnaps him. He forces him into a neverending series of bare knuckle fights against brutal thugs to pay back his debt and see his family again, but Frank gets almost too good at fighting and wins consistently. It ended with Frank and his final opponent both a punch away from death, swinging their fists at each other one last time. You never knew who won though. A good friend said to me “This is OK, but why not make it post apocalyptic?” And I just went “Oh yeaaaaaah…” and the new story we know as Bust was born. I also love the Fallout games. They’ve been a great source of loose inspiration through this whole project. 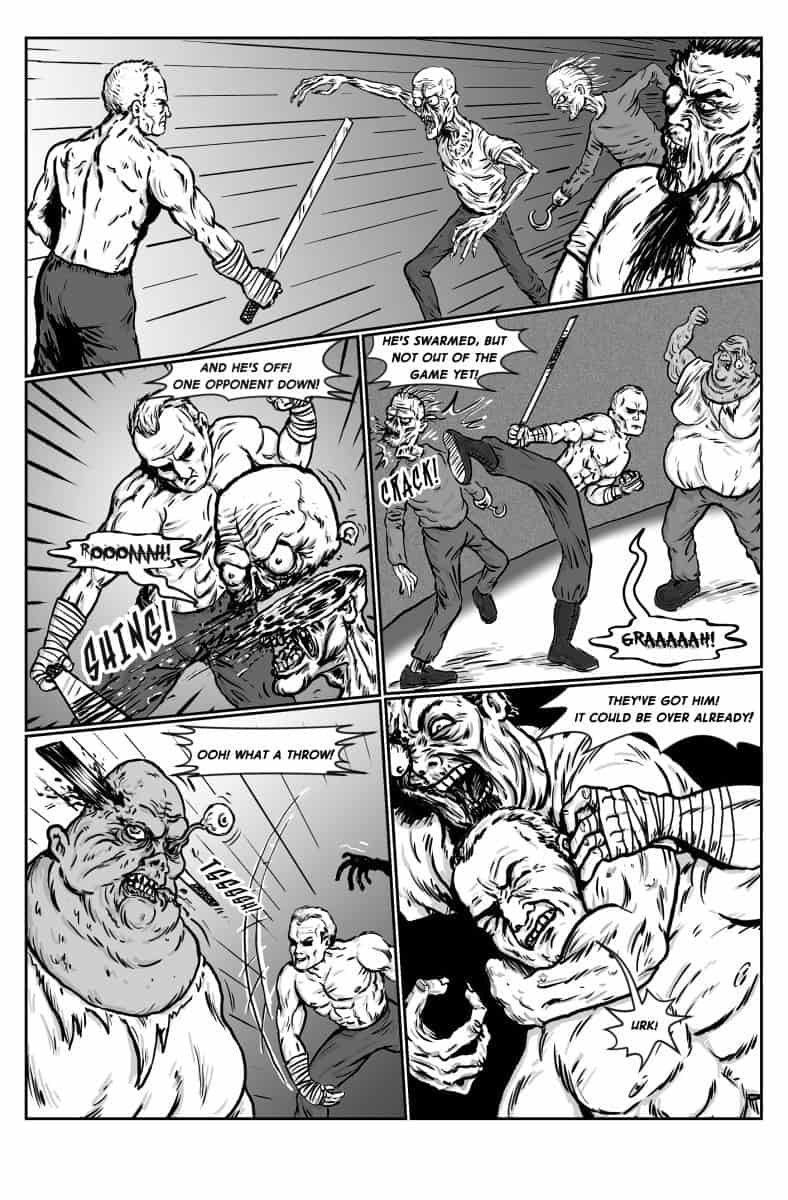 I adore flawed heroes. I see a lot of myself in Jack because I’m a total self-doubter. I always tell myself I should work harder even though I’m writing comic scripts or novel chapters hours after my day job has ended. Alternatively, Jack constantly wants to be a better man and work hard to protect his family in a world gone insane, but he keeps forgetting he’s no saint. He’s ruined so many lives with his deadly sleight of hand and cheating card tricks, and although he wants to change, he can’t deny the rush of a fresh pack of cards and the opportunity to win. He’s an addict of chance and after society collapses he sees everything as a gamble. He’s more at home in a flawed world than a planet governed by order.

I get asked this one a lot, and I have to come clean about whether or not the monsters in issue #1 are zombies. I can confirm that they’re not the undead, but rabid mutants – kind of like the mutants in the Fallout games but completely devoid of rational thought. This is a bit of spoiler, but you can have it as an exclusive for being kind enough to offer me an interview – there is a massive, years-long time skip between Bust’s first and second issues, and by the time the latter opens, the mutants have all died out. They never come back. However, I revealed the first page of the second issue (called ‘Wasteland Ronin’, a title our backers voted for) on our campaign page and it opens with a shot of a two-headed crow in the desert, which suggests the plague has evolved to target animals. The question is: what other abominations are out there roaming America’s southern states? I’ll stop now before I really start spoiling things…

The reason I went with mutants instead of zombies is because we simply couldn’t take on the might of The Walking Dead. Kirkman’s brilliant tale of survival horror simply cannot be contested, so that was never our intention. I’m a fan of his work too so wouldn’t dream of stepping on his toes. Instead, Bust uses the mutants to accelerate America to a state of total collapse, and to move all the comic’s key players into place. They’re a framing device and a flashback in issue #2 sees two characters discussing what the mutants are. One of them asks if they bit you, would you turn into one of them. I haven’t finalized the dialogue yet but the other person loosely replies, ‘don’t be stupid, they’re not zombies. If you get bitten you die, it’s as simple as that.’ I wanted to keep people guessing until this scene before clarifying but I absolutely understand and appreciate why readers might think this is a zombie story, but rest assured it’s not.

I’m totally open to fan suggestion here, because I’ve got a whole arc planned out for five, maybe six issues, but to be honest if Bust gets a following and the fans want more, I’ve left it open to follow ups. I already know Jack’s fate, who lives, who dies and more. I can tease that the body count is going to be through the roof, and a lot of blood will be spilled, but there’s also lots of scope for human decency amid the chaos of the new world. In short I’m going to do my damnest to make you feel either angry or sad while reading Bust.

If I had to compare the tone of issues 2-5/6 to another piece of fiction it’d be Mad Max 2: The Road Warrior. It goes from that first issue of survival to humanity trying to rebuild and make something good out of the old world’s ashes. 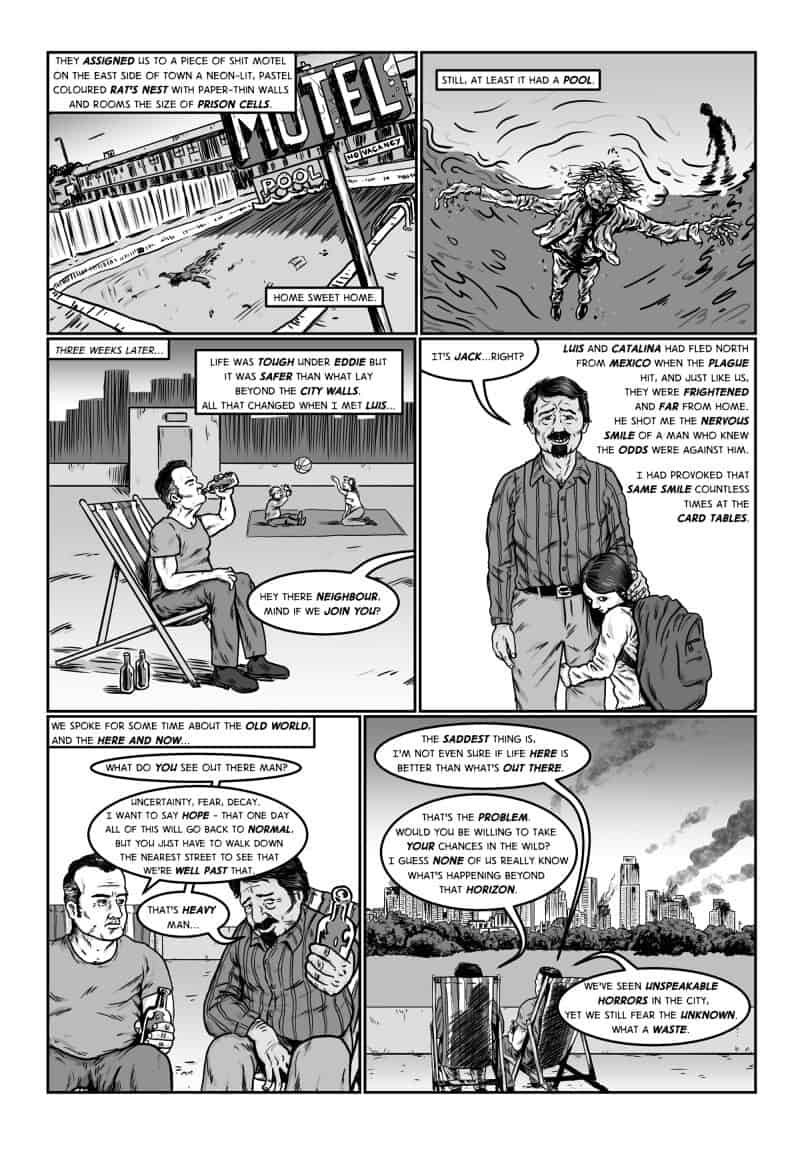 Bleak is a good word to describe it, but it’s also about accepting that you can’t control every aspect of the world around you and that sometimes you just accept the crappy things life throws at you from time to time. Jack was a terrible person in his swindling days, but he quickly sees a way to atone for his deceit by pledging to protect his family no matter what. All of a sudden, fleecing suits at the card table for big money is no longer the most important thing in the world, and he sees the apocalypse as a clean break. But in all honesty it ends up being anything but clean.

If this has whetted your undead appetite, check out the first issue of Bust online as a full digital webcomic!

Two print-runs of the comic will be launched in April 2015!  And though the funding drive is over, you can still pre-order the Kickstarter Edition as well as the regular version on the blog.

Order them while you can, you don’t want to miss this!