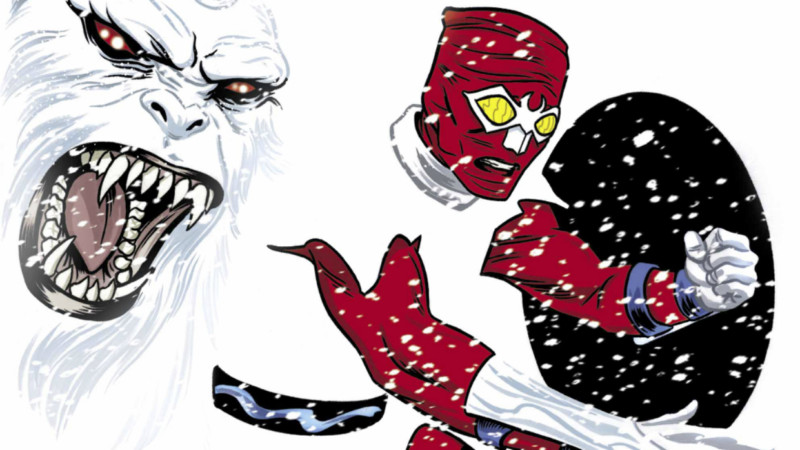 BUG! THE ADVENTURES OF FORAGER #2

BUG! THE ADVENTURES OF FORAGER is back! The mighty team of Allreds dishes out yet another great Kirby cry for justice. You can expect all the tripped out, psychedelic, meta storytelling that you’ve been craving for so long.  Although mostly involving Kirby creations, this issue is full of rich DC history, with silver age goodies and references like Red Bee and the Losers. It’s time to test your DC knowledge and maybe learn a thing or two. BUG! THE ADVENTURES OF FORAGER #2 is written and drawn by Lee Allred, Michel Allred, and Laura Allred.

READ: Need to catch up? Here’s our review of BUG! THE ADVENTURES OF FORAGER #1!

Part two of the “Domino Effect” story arc continues its zany LSD trip, tossing us across the page as Forager uses his shield to glide down a mountain. Entering the snowy setting, we are introduced to “Sarge” Clay and “Gunner” Mackay of the Losers. Created by Robert Kanigher, the Losers have a long history in the DCU starting back in 1969. Jack Kirby also did an astonishing run in the mid 70’s with these characters.

Along with the team of soldiers, we see the Blue Beetle, Sandman, and Sandy the Golden Boy make an appearance. Dan Garrett, the original Blue Beetle, was created by Charles Nicholas. Interesting enough, Blue Beetle was Kirby’s first attempt at making a superhero.

Out of all these characters, Sandy the Golden Boy is probably the only character that Kirby never contributed to. What’s interesting is that last issue we saw Garrett Sanford as the Kirby created Sandman, and here in BUG! THE ADVENTURES OF FORAGER #2 it looks like the original Wesley Dodds incarnation. So, going by the costumes that each Sandman wears, it’s safe to make this assumption. Also, it may explain why Sandy the Golden Boy is here since he’s Wesley’s sidekick.

There is also a nod to the Red Bee, a golden age hero published by Hit Comics back in 1940. Page #5 of the issue does a cool little homage to Hit Comics. Although Red Bee isn’t actually in this issue, they really went deep with their references. We even have a surprise appearance by the captured goddess, Rama Kushna! Following that, Forager and his new friends rescue her after the defeat of General Electric. Then, she sends Forager off, leaving us in anticipation for BUG! THE ADVENTURES OF FORAGER #3!

First off, the Allreds have been a mighty team for quite a while now. After working on books like Marvel’s FF series and creating the Image series MADMAN, it’s no wonder they’re good at trippy storytelling. The deep DC lore in this issue is quite interesting and will get any new fan searching for past stories. It will be interesting to see what else they pull out of their sleeves. Mike Allred’s signature style of drawing has a very 50’s and 60’s pop art style. So, being bright and outrageous, it fits perfectly for this Kirby homage.

Overall, BUG! THE ADVENTURES OF FORAGER #2 doesn’t progress the actual story of Forager, and whatever may be going on. Yet so far this Kirby love letter just keeps getting better and better. So seeing these classic heroes put back on the pages is heartwarming for any Kirby or DC fan of the past. The issue leaves us confused, but curious as to what’s going on, and who is this little girl with her teddy bear? The Allreds are bringing silver age storytelling back in a great way. We’re excited for the next part to this outrageous series and stoked to see Young Animal delivering a great line so far.