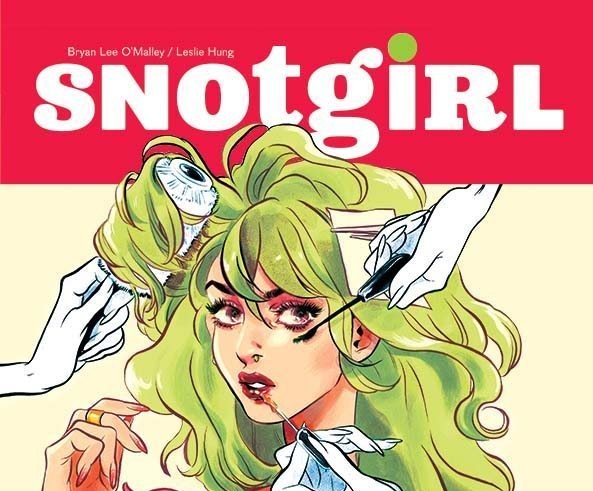 It’s been two years since Bryan Lee O’Malley released his last book, SECONDS, and six years to the day since he released SCOTT PILGRIM’S FINEST HOUR. O’Malley has not been idle of late. He’s been teasing his next major project, WORST WORLD, and today Image put out SNOTGIRL #1, written by O’Malley and illustrated by inker extraordinaire Leslie Hung. This newest effort is very reminiscent of works like SECONDS and some of the later books of the SCOTT PILGRIM saga. Unfortunately, this echoing of previous works is less of a cohesive element in O’Malley’s work and more of an albatross around his neck. As a writer, he shares the core weakness of his protagonists: the inability to mature.

SNOTGIRL #1 exposes the life of hip twenty-something Lottie Person, a fashion blogger living in the big city. With her looks, style, and devoted internet followers, you would think she has it all. But under the veneer of a carefully choreographed lifestyle, Lottie houses all the loneliness and doubt of a drifting millennial. Her friends are shallow and her boyfriend’s unavailable. Plus she suffers from crippling allergies that dissolve her face into tears and mucus. Things take a turn for the better when Lottie meets Caroline, an effortlessly cool girl who plays by her own rules. And with a change in allergy medication, it seems like Lottie’s turning her life around. But that’s when all hell breaks loose.

On a surface level, SNOTGIRL seems like a guaranteed hit. The protagonist is the perfect mix of trendy and sensitive. She’s cute, tongue-in-cheek, and stylish – what’s not to like? She’s a fashion blogger, connected with Art and the Internet, the two biggest touchstones for today’s youth. Plus, she’s funny… sort of. Teenagers will be gobbling this stuff up – right?

The problems start to emerge when one views the issue alongside O’Malley’s other books, something most fans of his earlier work will inevitably do. Seen that way, SNOTGIRL reads like an updated and un-funny version of SCOTT PILGRIM’S FINEST HOUR. O’Malley’s never graduated from writing coming-of-age tales about drifting twenty-somethings trying to get their shit together. When he did it with Scott Pilgrim, the stories were close enough to his own life that they seemed wonderfully real. With SECONDS, O’Malley took the worst parts of PILGRIM – the fantasy elements and morality lesson – and amplified them. Now, with SNOTGIRL, O’Malley still can’t get away from having his protagonists wrestling with their lives and giving themselves ulcers over insignificant problems.

READ: Check out our thoughts on what makes the SCOTT PILGRIM comics so great!

But it doesn’t stop there. The specter of a Ramona Flowers-type character – O’Malley’s version of a manic pixie dream girl – haunts all his works. SNOTGIRL is no exception. Lottie herself reflects aspects of the trope, and she finds guidance in free spirit Caroline. By this time, O’Malley’s use of this trope is less a theme and more a crutch. Ramona Flowers worked because she inverted the trope as much as she fit in with it. SECONDS had a girl that was literally magical. But with SNOTGIRL, O’Malley can’t lose his fascination with cool, distraught girls with dyed hair.

As for the art, Leslie Hung creates linework that seems naturalistic and animated. Her color palette uses secondary colors to achieve effects both charming and repulsive. The only heartbreaking thing is the lack of focus on the characters’ outfits. For a story that centers so much on fashion, Lottie’s clothing seems like an afterthought. In one crucial scene, Leslie Hung draws Lottie sporting her friend’s bomber jacket. But the drawing of the bomber on the page is indistinguishable from any other bulky piece of outerwear. And among today’s style-minded intelligentsia, the bomber isn’t merely some interchangeable garment – it’s a fashion staple. The end result? Lottie Person just doesn’t look like a fashion blogger.

READ: Our 3 reasons why Image Comics is a top publisher!

Though it’s packaged with cute humor and stylish artwork, SNOTGIRL #1 fails to convey the sense of youthful curiosity and self-discovery it aims at. Perhaps as the series continues, the story will fall into its stride and deliver the effortless emotional punch that O’Malley is truly capable of. But as it stands now, SNOTGIRL becomes a middling-at-best teenage drama that’s sadly lacking in hilarity. Hopefully O’Malley will put down his storytelling crutches on Worst World and rediscover a voice that’s original and unique.