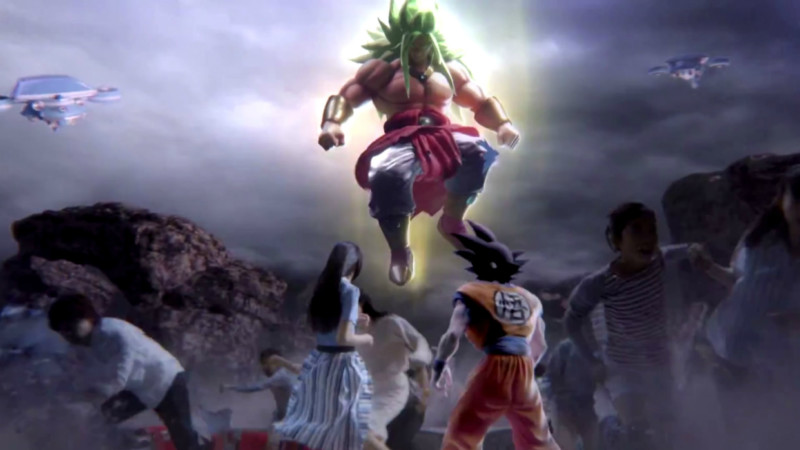 No one ever really dies in DRAGON BALL, so even long-dead characters can get their share of the spotlight. This is especially true for the Legendary Super Saiyan Broly, who has inexplicably survived countless brushes with death and has been a favorite of DRAGON BALL Z fans since his very first film appearance. Sure enough, years after the official end of DRAGON BALL Z, the hulking Saiyan is making a return — in god form. Universal Studios has released official footage of this new Broly as part of the DRAGON BALL Z: THE REAL 4D attraction. Check it out below:

In the trailer for this year’s experience, Broly punches Goku past the screen and into the audience, who runs away from the battle. One of the women refuses to flee, and unleashes her ki alongside Goku to blast Broly off the planet with a synchronized Kamehameha.

For all you non-Japanese speakers, check out the translated transcript from GameFAQs’ rowanowa-zoro:

“You are in the Super Tenkaichi Budokai, the fighting between Z-warriors takes place now! From your floating pod, you are caught in an intense air combat. Suddenly, a terrifying enemy appears before your eyes: ” Broly God ” !! Even Goku in “Super Saiyan God Super Saiyan” can do nothing against him … With Goku, with the Kamehameha, can you defeat this enemy !? And who will be the most powerful warriors who will remain until the end?”

This immersive attraction will be at Universal Studios Japan and, in typical 4-D fashion, will up the ante from standard visual experiences, with sensor-equipped motion seats, wind, strobe lights, fog, rain, and various smells. (Can’t imagine what cologne Saiyans use.) Characters from GINTAMA, ONE PIECE, and JOJO’S BIZARRE ADVENTURE will be showcased in multiple attractions around the park, in addition to those from DRAGON BALL Z. Last year, a similar 4-D event involved a battle between Goku and Frieza.

DRAGON BALL Z: THE REAL 4D will run from June 30 to October 1, 2017. If the images after the trailer are any indication, Goku will power up to Super Saiyan Blue. Gohan (as the Great Saiyaman), Krillin, Piccolo, Vegeta, and Mr. Satan will be featured in the film.