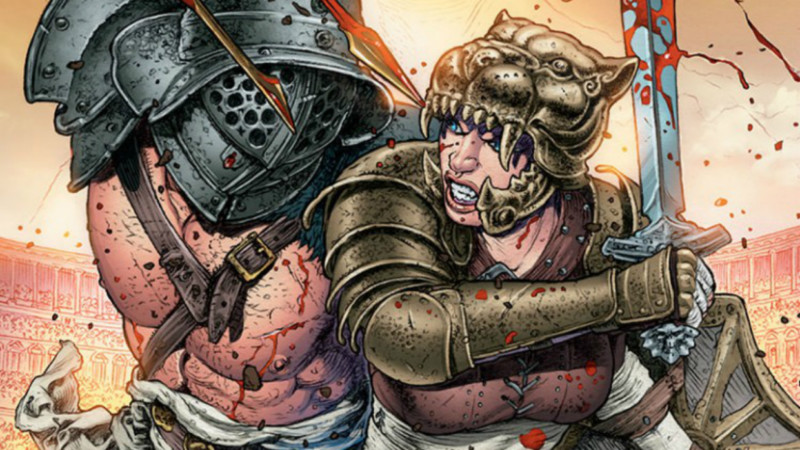 BRITANNIA: WE WHO ARE ABOUT TO DIE #2

Sometimes it is necessary for a book to switch up the normal format to further the story. BRITANNIA: WE WHO ARE ABOUT TO DIE #2 perfectly balances the introduction of new elements and characters with the ongoing detective tale. This issue diverts from the normal crime procedural elements and shifts the focus to action in the gladiator arena. Writer Peter Milligan and artist Juan Jose Ryp continue to bring their A-game in another outstanding addition to the series.

READ: How does music in GUARDIANS OF THE GALAXY contribute to the storytelling? Here’s what we think of Awesome Mix Vol. 1

In this issue, Antonius the Roman detector (the ancient equivalent of a private eye) continues his search for the mysterious force that is murdering noble youth. A series of clues take him to the gladiator arena where he meets Achillia, the mysterious female gladiator that is shaking up Rome. The two characters’ plot lines begin to interconnect in this issue. Milligan does not reveal whether or not the two will be friend or foe. Beyond the murder mystery, this issue introduces Achillia’s strange past. Achillia is a controversial figure in Rome. She is empowering the women by being such a fierce combatant. Also, she’s angering men disgusted by the idea of women in the arena.

Achillia’s new story elements are the focus of the issue. Therefore, there is little Antonius detective work. The series normally functions like “Law and Order: Ancient Rome.” It is an exciting change of pace to see more of an action packed gladiator narrative. There is also an increased focus on Roman politics and perceptions of women. These factors add another layer to this already dense arc. Milligan does not sacrifice character development. Through concise dialogue, he is able to let the characters’ personalities shine through the plot. Achillia and Antonius never feel like cogs in the plot machine. They are always present and active throughout the comic.

READ: Miss the first issue? Here’s our review of BRITANNIA: WE WHO ARE ABOUT TO DIE #1

The gladiator scenes are the highlight of BRITANNIA: WE WHO ARE ABOUT TO DIE #2. Ryp’s art perfectly captures the violent action. His gruesome gladiator character designs are outstanding. Ryp’s style is a combination of Moebius’ detailed textures and thick forms, with the round faces and naturalistic posing of Avi Granov. It is a great mesh of multiple comic book styles that serves the outlandish plot well.

Achillia’s gladiator matches are tense and bloody, which is all one can hope for in a book like this. This book is not for the squeamish. Ryp has definitely mastered illustrating splashing guts and splattered body parts. You can really feel the power and brutality that Achillia brings to her fights.

Ryp’s depiction of the seedy underground world of gladiator fights is also inspired. The colorful cast of misfit criminals in the arena is Guy Ritchie-esque. Ryp does not portray the opposing gladiators as normal citizens of Rome. These fighters are a different sort, with a culture and language all their own. It is almost as if these scenes are occurring on another planet. Unlike the meek and spoiled upper class, the gladiators are intimidating and fierce. Ryp’s varying style helps to build the strange depiction of Rome in BRITANNIA: WE WHO ARE ABOUT TO DIE #2.

However, in some instances, Ryp misses the mark. There are a few slip ups in depicting some of the background characters. In a few panels, the characters faces have slightly awkward, dead-eyed expressions that don’t serve the story. It does not occur often, but when it does it is jarring. Ryp’s art is outstanding otherwise. This is a rare misstep for the immensely talented artist.

BRITANNIA: WE WHO ARE ABOUT TO DIE #2 is another phenomenal installment in this series. Milligan has found a way to pile on even more fascinating story elements, and Ryp’s depiction of gladiator combat is second to none. Hopefully, this series will be able to keep the audience guessing with creative mix-ups like we have seen in this issue.