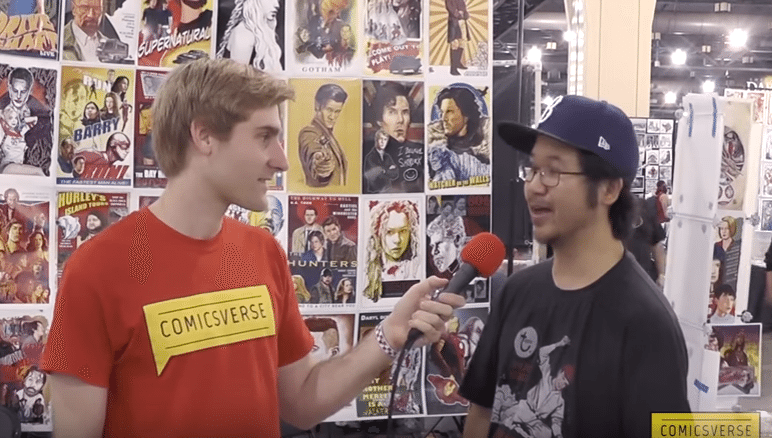 At Wizard World Philadelphia, we had the opportunity to speak with freelance illustrator Brian Kong. We spoke about his influences, his current projects, and what it takes to make a living as an artist. Kong is an American illustrator. He first broke into comics in the late 1990s with his work at Marvel Comics. Able to transition easily between meticulous centerpiece drawings and panel-work, Brian Kong was at times a penciler and cover artist for books like CAPTAIN AMERICA and X-FORCE. After leaving Marvel, Kong found success as a freelancer. He seems to have since brought his talents to a variety of different properties.

WATCH: Interested in illustration? You need to check out our interview with acclaimed comic book artist J.G. Jones!

What particularly stood out to me was Brian Kong’s success in carving spot for himself as an illustrator for popular sports teams. Believe it or not, a considerable number of major league teams have, in the past, produced comic books about their players. Most notable among these are the New York Yankees. Their promotions of players like Babe Ruth and Yogi Berra often included supplementary comic properties. These comics helped to further these players’ branding as national heroes, subtly equating them with the likes of Superman and Captain America. Finally, in the 1990s and early 2000s, Kong worked on the next generation of these sports comics. He illustrated books for the Yankees, New York Mets, Miami Heat, and others.

READ: Superman is one of the most iconic figures in American entertainment, but what makes him such a resonant symbol? Find out in our analysis of the Man of Steel!

Most notably, Brian Kong’s skills in sports illustration landed him a partnership with Topps Trading Cards, where he has since designed cards for every one of their biggest properties, from Major League Baseball to Star Wars. He continues to complete projects for Topps while accepting commissions from other companies and fans at conventions like Wizard World. Brian’s story is a fascinating portrait of a life spent illustrating. In conclusion, his reflections in this interview are inspiring to anyone that finds themselves called to do the same.