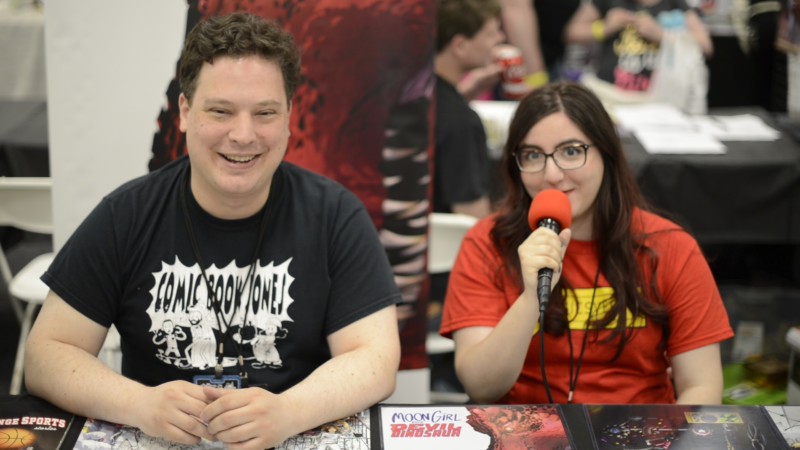 At this year’s Five Points Fest, we spoke with Brandon Montclare, writer behind Image’s ROCKET GIRL and Marvel’s hit comic, MOON GIRL AND DEVIL DINOSAUR. Known for his collaborations with writer and artist Amy Reeder, he began his career as an editor with DC Comics. Montclare edited several high-profile books such as ALL-STAR BATMAN, SWEET TOOTH, and HELLBLAZER. ROCKET GIRL marked his first major series and his first collaboration with Reeder. ROCKET GIRL is a sci-fi adventure about a girl who goes back in time to discover her timeline should never have existed, marked his first major series. It’s currently on hiatus, but in this interview, Montclare tells us about the series’ highly anticipated return.

READ: Want to get started on Montclare’s standout series? Check out our MOON GIRL AND DEVIL DINOSAUR #1 Review: Everybody Loves Science!

Proving to be an outstanding writing duo, Montclare and Reeder took up with Marvel to launch MOON GIRL AND DEVIL DINOSAUR. The all-new character of Moon Girl, a.k.a. Lunella Lafayette quickly became a standout hit with young readers for her tenacity, bravery, and brilliance. Lunella also provided much-needed representation and diversity, placing a young African American woman as definitively the smartest person in the Marvel Universe. The return of Devil Dinosaur, a Jack Kirby favorite, also set Marvel fans ablaze.

In this Interview, Brandon Montclare gets Personal about his Inspirations for Lunella!

In this interview, Brandon Montclare talks about how he draws inspiration from his daughter to write female characters. We also get to know more about Montclare’s process in writing young characters. Montclare sheds light on his incredible collaboration energy with Reeder, as well as how his team-up creates remarkable female characters. MOON GIRL AND DEVIL DINOSAUR shows no sign of stopping anytime soon, and ROCKET GIRL is a high energy treat. Be sure to check out this interview, and Brandon Montclare’s work, if you haven’t already!