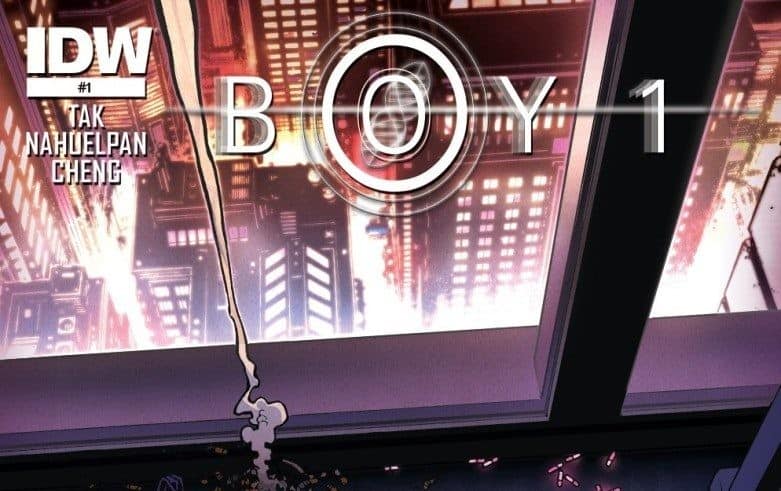 When you think of comics publisher IDW, you probably think of licensed properties such as the Teenage Mutant Ninja Turtles, Transformers, and G.I. Joe. However, IDW is more than writers for hire cashing in on popular franchises. Enter BOY-1, an original science fiction story from writer H.S Tak and artist Amancay Nahuelpan.

BOY-1 follows Jadas Riezner, a young and frequently medicated scientist working in the field of genetics at Genomyne Bioworks. Jadas’s long-lost father founded the company. When faced with budget cuts, Jadas’s boss pressures him to begin tests on human subjects. Their research must be advanced to produce a viable product for humans to make some bank. While initiating one of these tests, Jadas holds a conversation with an artificial intelligence. The A.I. reveals all memories of Jadas’s father Steven have been erased from the company’s servers. Naturally, Jadas sets out to investigate the “Mystery of the Missing Dad.” Unfortunately, it seems like mysterious individuals with ties to Steven Riezner capture Jadas. One of them refers to events with Jadas as some sort of experiment.

This issue scores points with me personally for reading like “Tron: Legacy” filtered through the works of Philip K. Dick. If ever there was a way to win me over with a sci-fi book, this does it. That isn’t to say the writing is without fault. Film references litter the script and add nothing to the plot. As a result, it makes several lines of dialogue feel like unnecessary filler. There are also some minor issues with pacing, but these are likely owed to BOY-1’s highly limiting four-issue format. While it’s not easy fitting plot and character development into such a small a book, Tak proves he’s up to the task of making it work.

READ: Our review of INJECTION #4, a stellar sci-fi book from Warren Ellis.

Nahuelpan’s art is largely solid, yet I find myself baffled by the inconsistent quality of facial expressions. From one page to the next, characters lose and regain degrees of detail. This appears to occur especially when characters tilt their heads or look in different directions. This is small beans, however, considering how well it seems like the pencils, inks, and colors mesh to create a visual tone similar to sci-fi films like Blade Runner (because more Philip K. Dick comparisons can’t hurt).

BOY-1 #1 solidly opens to a nice little sci-fi story. The opening welcomes the change of pace from the current wave of superhero events, cross-overs, and tie-ins. It reminds me that it’s good to step back from the hectic nature of the “Big Two” publishers. In conclusion. it’s important to bask in the simplicity of a single book telling its tale. Its use of drugs, science, and atmosphere tell a personal story set against a backdrop of possible corporate intrigue and mystery. As a result, BOY-1’s particular tale looks to be a good one.