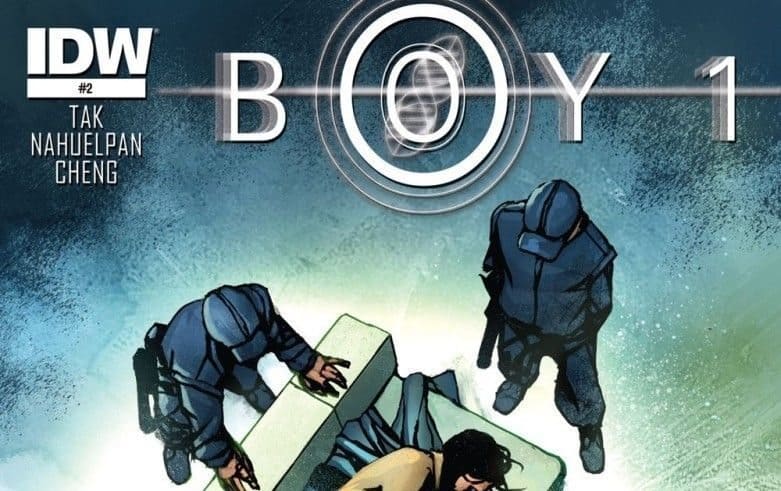 BOY-1 #2 is a difficult book to discuss, not because of the science-fiction concepts it deals with or the format of its narrative. No, this book is hard to write about because it feels as though the book hardly exists at all. It pains me to say as much after last month’s promising debut issue, the strength of which was such that I felt certain IDW had a potential modern classic on its hands.

Now this month’s issue reinforces that a strong debut isn’t everything.

While not lacking in twists, suspense, or the sci-fi flair that caught my attention with issue one, H.S. Tak’s script is unable to keep my emotional invested this time around. I feel that I should care when our protagonist, geneticist Jadas Riezner discovers his true nature as a clone of his father. I should be on the edge my seat as he breaks free of the scientists attempting to wipe his memories and evades his aggressive pursuers. I should fear for Jadas as armed thugs storm his home take him back to the lab.

But just as the T-800 understood that he could never cry as humans do, I know that I simply cannot feel any of the things this comic wants me to feel. The dialogue is stiff and clunky, and the pacing is poor, both robbing the script of the dramatic impact it should have had.

READ: ALEX NADER LOOKS AT THIS WEEK’S OFFERINGS FROM VALIANT!

The art, while largely passable, has many more weak points than the previous issue. Anatomy and facial structures in particular appear half-rendered in more than a handful of panels.

Thankfully the colors and inks remain consistent, so the book does at least retain its established atmosphere in spite of Amancay Nahuelpan’s lackluster pencils.

There is sadly little else that can be said of BOY-1 #2. While I had described the previous issue as something the late sci-fi luminary Philip K. Dick might have written while sober–an assessment I stand by even now–this follow-up issue feels more like if Dean Koontz wrote yet another lackluster sequel to one of his older, better works while drunk.

And that, my friends, is the very definition of a downgrade. I just hope the team behind BOY-1 can pull it together over the course of the remaining two issues and deliver that great modern sci-fi story the first issue promised.

CHECK OUT MORE REVIEWS BY JAKE!