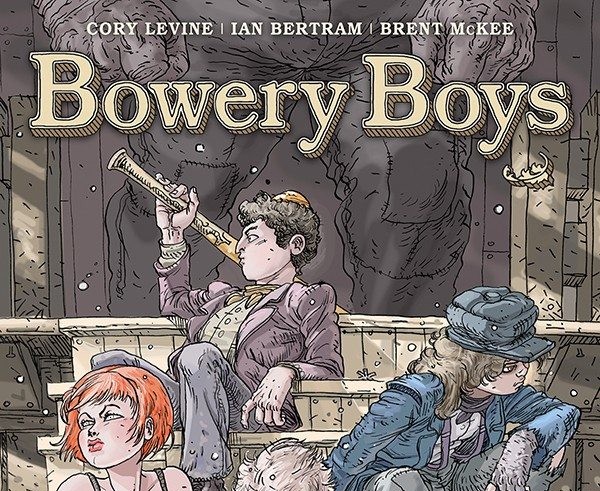 Cory Levine, Ian Bertram and Brent McKee cast an eye back on a New York building itself up from the grime of the past, all the while telling a riveting story of a man condemned to die, while his son desperately tries to save him.

THE BOWERY BOYS: OUR FATHERS by Cory Levine, Ian Bertram and Brent McKee

While at New York Comic Con 2015 working to bring you the best interviews and content only ComicsVerse can provide, we were fortunate enought to talk Cory Levine. During the interview, which you will get to see soon, he discussed work on his book, THE BOWERY BOYS: OUR FATHERS. Afterwards, I picked up a copy of the book in a beautiful hardback edition.

Originally a webcomic, which can be found here, this edition, published by Dark Horse, collects the first five issues of the series. Set in Manhattan in 1853, it tells the story of Nikolaus McGovern, son of Bill McGovern, a Union Leader, who is framed for murder following the instigation of a strike to get better working conditions of his fellow workers. Throughout the series, you follow young Nikolaus’ journey to find justice in a city thick with villainy. 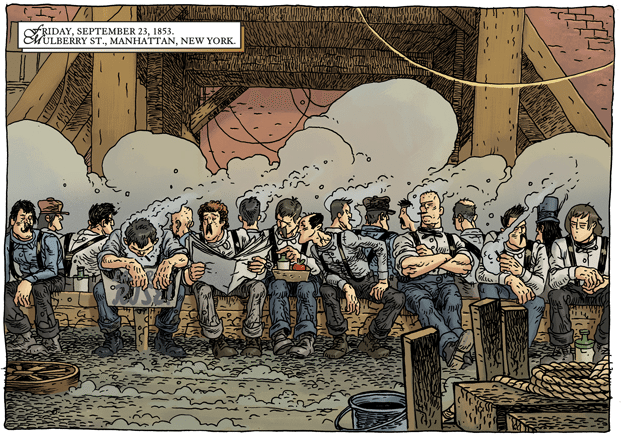 From the first pages, you are immersed in the world of a dirty grey thriving city, full of smoke and sweat. In every corner of this world, corruption runs rampant, racism is the order of the day, and politics is the root of all evil (some say it still is). In one corner sits Bill McGovern, devote Catholic, who wants a fair Union, and in the other corner lounges Roderick Pastor, a rich man who will stop at nothing to get the Union crushed and his developments built. In the middle lies Nikolaus, devoted to his father, and Markus Welsh, hired by Pastor to destroy McGovern. Welsh is a creature of anarchy, flitting his allegiances on a dime, and a master of words, with a dagger close to his heart.

Cory Levine writes without a leash, revealing humanity in all its glory and selfishness. Over the course of the story, he builds tension, as plots and sub plots twist and turn as quickly as Bertrams’ scratchy art. He knows his history, and his dialogue feels of the age. He writes gloriously despicable villains and flawed angry heroes. This is a book of high drama and pure violence that draws you in and makes you pay attention. 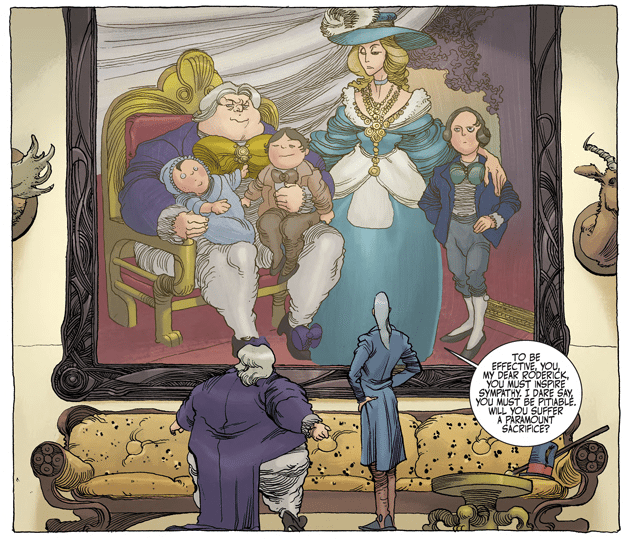 Creating the world to go with Levines’ words are artists Ian Bertram and Brent McKee. For the most part, it is Bertram on duties, and McKee supplies some art near the end of the story. Bertram’s art is great. It’s manic and scratchy, and he switches quite quickly between super detailed panels when he’s creating a scene, to more character-focused panels during the action. There is action here- bare fist brawling, police raids, murder. Everything is in motion, each line used to convey a thought, an action, a feeling. Even his character design conveys a lot, from the round portly figure of Pastor, to the flighty, thin elf-like Welsh. Everything has meaning and contributes a lot to the brutality of the story. Brent McKee offers a more polished feel in his inks, but strangely it doesn’t feel jarring as it switches between art styles, and he focuses much more on the characters as the story reaches its emotional climax.

BOWERY BOYS: OUR FATHERS is a treat. It reads like an adventure through a bygone age. It feels like Charles Dickens and Martin Scorcese collaborated on a period piece and this was the fruit of their work. It’s powerful, shocking, funny and speaks a lot about the human condition. Like most good books do.

CLICK: Enjoyed this review? Find out more about CHRIS here!