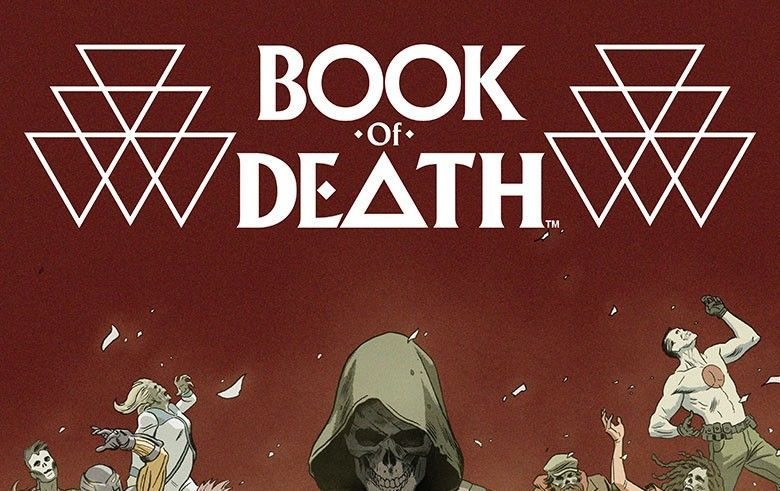 Valiant recently announced that their crossover, BOOK OF DEATH, is a hit. With more than 200,000 issues sold in the crossover, it’s taking the Valiant universe to some very interesting places. I said before it’s like DC’s FUTURE’S END done right, and I stand by that. The “FALL OF…” one-shots have been excellent so far, and they suggest lasting importance to the universe. As you may know (or agree with), comic book fans are all about importance in continuity. I remember vividly in 2011, fans crying outrage for DC’s relaunch, saying that now the older comics didn’t “matter.” That’s still a notion I find inane; of course the comics still matter. If you liked them, they matter.

Continuity is great, but it’s something to be used, changed, modified, etc. Preserving the status quo for too long just makes for stale stories. Using continuity with intent and forever changing is contrary to a classic idea of comics, and companies like Valiant are utilizing that idea to the fullest. I’m not sure how BOOK OF DEATH will end, but I am fairly sure it will leave the universe quite different in a way that Marvel’s SECRET INVASION, for instance, couldn’t. And a part of that is the size of the company and the amount of comics published; Valiant can afford to take these risks, and watch them pay off. And they are! We know that UNITY ends (the book for sure; the team as well?), Eternal Warrior finds himself on another planet, and Master Darque continues to loom over many titles in the fall. With these destinations in mind, as well as those in the “FALL OF…” books, we need to ask: how?

Well, this week’s comics reveal a bit, though they expand on the storyline more than the universe. BOOK OF DEATH’s third issue and its supporting comic (and hard-to-find incentive) LEGENDS OF THE GEOMANCER continue the crossover. It’s a lean weak, but absolutely necessary for fans of Valiant. 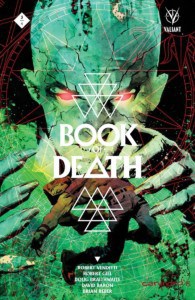 BOOK OF DEATH fills in quite a bit about the overarching story, while also moving the plot forward. Usually the middle of a crossover event does one or the other, and it’s rare to find an issue that accomplishes both tasks and acts as a satisfying read. As Unity licks their wounds from Eternal Warrior’s serious beating, he works with the time-displaced Geomancer Tama to discern the location of their adversary. Meanwhile, we get to see the Master Darque’s manipulation of the Geomancer David rather than further futuristic visions from the Book of the Geomancer.

Now, I’ve never read any SHADOWMAN comics, but these past two issues have been enough to instill a great fear and respect for Master Darque. His story parallels Gilad and Tama’s, as his attempts to take the powers of the Geomancer are met with their opposition. I feel for David, as he is arguably only the focus of Master Darque’s evil due to Gilad and Tama’s actions. This issue raises the stakes for the geomancers and Gilad, as he struggles against only a taste of Master Darque’s Geomancer-enhanced power. With only one issue left, I’m not sure how this is going to go for the Eternal Warrior, though I’m guessing not good (as we’ll see in November’s WRATH OF THE ETERNAL WARRIOR). 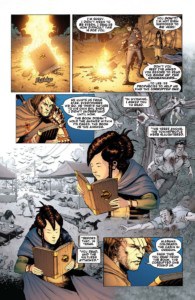 CHECK OUT: What Comicsverse thinks of FOX’s GOTHAM!

The art has done a great job of conveying Master Darque’s powers. His necrotic animals are horrifying and very reminiscent of some of the best dead things in DC’s recent SWAMP THING run. The overwhelming force of death makes for a great adversary to the Eternal Warrior, an immortal being focused on preserving the world. Where THE VALIANT could have used a few more issues to tell its story, BOOK OF DEATH is a much tighter experience, full of excellent character moments and a sense of a real threat to the Valiant Universe, which will (hopefully) be intact when the series ends next month! 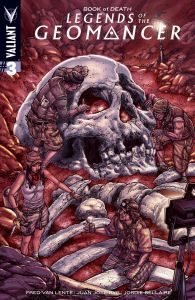 As much as I like this book, I still do not agree with its distribution methods. It’s difficult to get, and most importantly: it’s apparently not going to be collected digitally or in trades. While this decision from Valiant may lead to more shelf space occupied by their titles—comic shops must order a certain amount of BOOK OF DEATH to get any issues of this comic—it alienates a number of Valiant’s biggest fans. 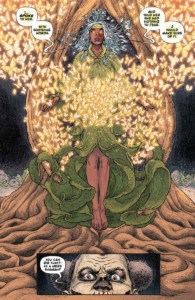 LEGENDS OF THE GEOMANCER tells the origin of the Geomancer power through the first Geomancer, Anni, and her connection to the earth. Furthermore, it is ce
rtainly connected to three of Valiant’s biggest stars, the Anni-Padda brothers: Gilad (the Eternal Warrior), Ivar (Timewalker), and Aram (Armstrong). And it’s a good story! Great art, interesting characters, and a plot that ties in to many parts of Valiant’s rich history. I truly hope that Valiant decides to collect this in the future, in a BOOK OF DEATH hardcover or at least in some capacity, as Van Lente’s story is something that fans would really love to experience. 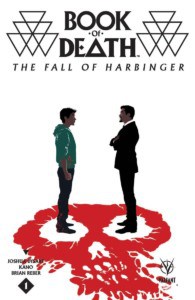 BOOK OF DEATH: FALL OF HARBINGER #1 continues our looks into Valiant’s future, and I’m quite excited to see how Harada dies or falls (if he does at all). So far, Bloodshot and Ninjak have met their fates in fitting manners, but what does that mean for Harada? Or the rest of Harbinger’s cast? We’ll find out on Wednesday!

READ: 6 Valiant titles you should be reading right now!