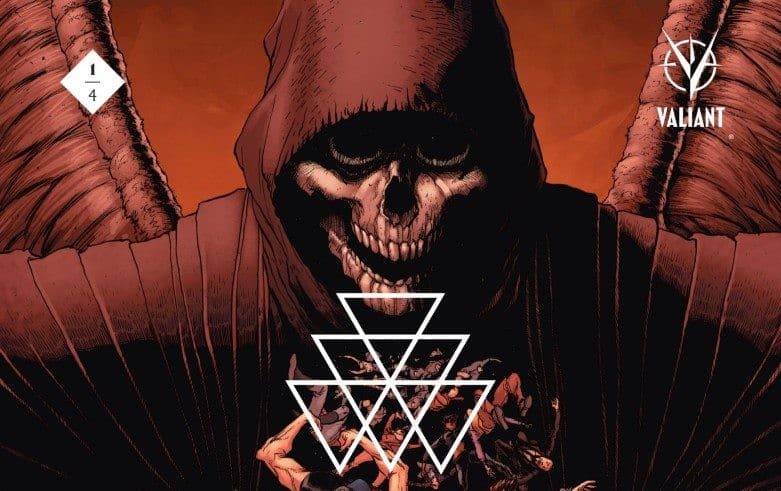 Valiant Comics launch a powerful event in BOOK OF DEATH #1!

You may not be too familiar with the comic book universe of Valiant, but it’s hard not to have noticed that the company is standing taller than ever before.  They’ve thrown a lot of time and effort behind the marketing campaign for their summer 2015 event, “Book of Death”, by Robert Venditti, Robert Gill, and Doug Braithwaite, and it’s not hard to see why.

The Eternal Warrior, one of the founding members of Valiant’s Unity superteam, has gone rogue.  He’s met a girl who he believes to be from the future, Tama, who brings a warning about a darkness that threatens to eclipse the entire Valiant universe.  The problem is, death is following in Tama’s footsteps, and Unity must make a simple choice: will they trust the Eternal Warrior, or choose to bring him in? 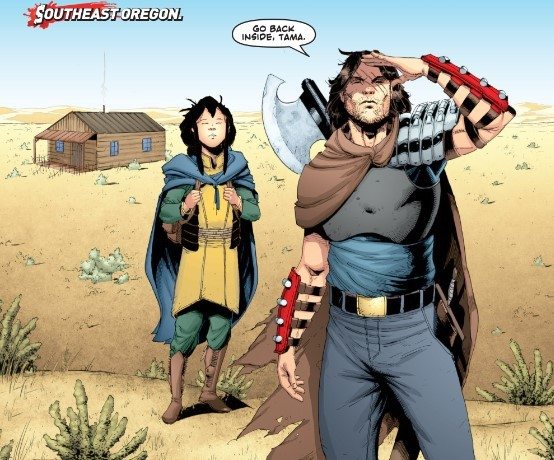 BOOK OF DEATH #1 makes an excellent introduction to the Valiant universe, and the company is clearly aware that – if their marketing campaign is successful – they’ll be having readers pick this book up who are decidedly unfamiliar with their characters.  As a result, there’s a quick dramatis personae page, and small text-boxes help align you with the key players.  The plot is nicely dramatic, playing off the interaction between the different characters, and quickly helping establish the historical relationships that add drama to the tale.  There’s a confrontation between X-O Manowar and the Eternal Warrior that strikes notes of real pathos.

Although you’re clearly meant to take the side of the Eternal Warrior and Tama in all this, BOOK OF DEATH #1 quickly establishes the scale, and – with the Unity team not believing time travel to be possible – their perspective is understandable.  The story opens with the massacre of an entire town in Wyoming, with the art perfectly styled to leave a strong sense of horror. 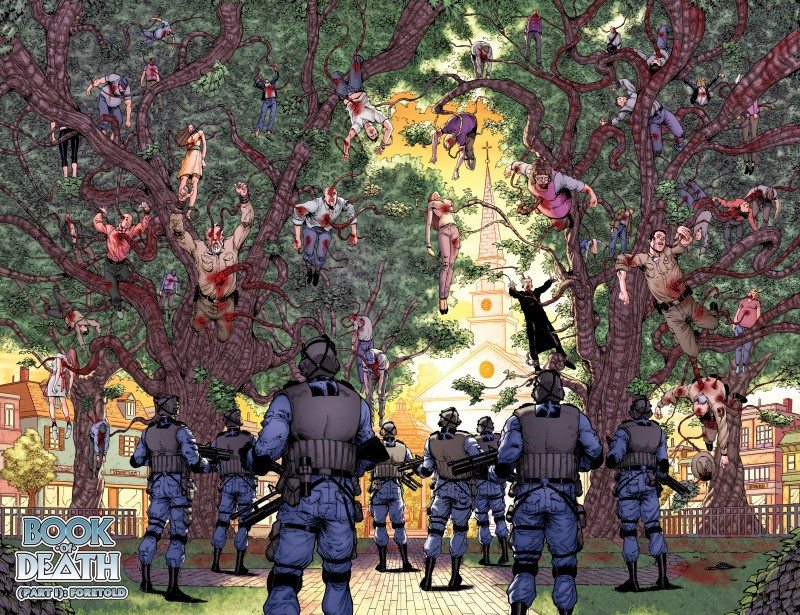 Speaking of the art, Robert Gill and Doug Braithwaite make a phenomenal team, and they really capture the sense of horror in Ashlee, Wyoming.  Every character is distinctive, and – in scenes where Tama reads the book foretelling the end of the world – they really carry off the sense of spectacle.  This is balanced out nicely by a conscious choice to underplay the spectacle in other moments; for example, the impact as X-O Manowar lands to confront the Eternal Warrior.

All in all, this promises to be a strong comic book series.  Here at ComicsVerse, we’re convinced that Valiant are becoming a true force to be reckoned with in the comics industry, and this event looks to be a very nice entry-point to their books.