The film industry is infamous for being a land of glitz and glamour. At the height of Hollywood’s golden age, entire studios lived and died on the image of their star actors. They relied so much on their stars that they hired “fixers”, like Eddie Mannix, fictionalized in this year’s HAIL, CAESER!, who could make sure that the celebs remained squeaky clean and gorgeous in the eyes of the public. Tinseltown’s most valuable currency was beauty. Things began to turn in the ’60s and ’70s as more and more filmmakers broke out of the studio system and created independent films. Actors began to be valued for their talents and authenticity rather than appearances. Actors like Robert DeNiro, Al Pacino, and Dustin Hoffman rose to prominence because of their abilities as actors rather than their glamorous looks.

As the ’80s ended and the ’90s began, the pendulum began to swing back again. Casting actors who could mix both good looks and acting chops—like Brad Pitt, Will Smith, and Denzel Washington—would almost guarantee box office gold. In recent years, the tenor of Hollywood has changed once again. The concept of a marquee blockbuster star is practically dead. A big name is no longer a promise of big box office returns. In addition, the rise of digital filmmaking techniques has provided independent filmmakers with a plethora of easily accessible technology to create films of the same caliber as those created within the studio system. It is from this environment that we see a new revolution in the types of characters portrayed in films. The last year of independent filmmaking has seen breakout hits that tell stories of body positivity and self-acceptance using characters that shatter the traditional movie star mold. 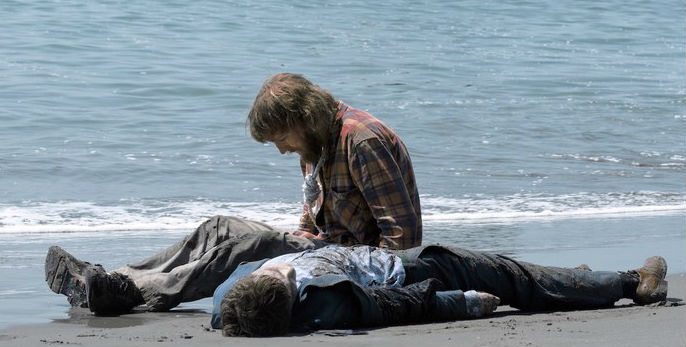 With its fairly well-known stars, it’d be easy to ignore SWISS ARMY MAN as being the most “traditional” of this new breed of independent film. However, the plot and theme of the film convey an insightful message about self-expression and body acceptance. The main character of the film, Hank (Paul Dano), is easily classified as a cis-heterosexual white male throughout the film. Hank has been shaped by the society around him to be ashamed of his body’s functions and that openly discussing things like farts and masturbation are classified as “weird.” Hank fears this label as the ultimate scarlet letter on his social well-being.

This fear is what creates Hank’s life of suppressed emotions. He can’t even work up the courage to talk to a woman, Sarah (Mary Elizabeth Winstead), who he sees on his daily commute. Because he is constantly repressing his feelings, he develops uncomfortable, stalker-like behavior. He follows Sarah’s social media pages constantly and keeps a photo of her as the background image of his phone. All of this behavior stems from one central emotion: shame. Hank is ashamed of his body, his lack of confidence, and his “weird” behavior. He cannot love himself and therefore cannot love anyone else.

The person who helps Hank to overcome his sense of shame is Manny (Daniel Radcliffe), a decaying corpse that washes up on the beach where Hank is stranded. Hank, stuck on a deserted island, discovers that Manny’s farts (yes, his farts) can propel him through the ocean like a human jet ski. Manny continues to provide for Hank in his moments of need. He spits water from his mouth when Hank is thirsty, he can chop wood like an action figure when Hank needs firewood, he even begins to speak when Hank is desperate for companionship. He is, as Hank puts it, “a multi-purpose tool guy.”

When Manny’s ability to speak reveals itself, Hank takes on the task of reteaching Manny everything he forgot since his death. Manny is a tabula rasa, looking at the world with wonder and joy as Hank explains to him love, sex, farts, and poop. The key to SWISS ARMY MAN’s message of body acceptance comes from the fecal factor. Manny is bewildered by the fact that Hank hides whenever he has to fart. His rationale being if everyone does it, why be ashamed of it? Hank’s trenchant refusal to accept the passing of his gas becomes his ultimate trial of self-love. It is only when Hank learns to freely break wind that he realizes the truth: our bodies are not gross and weird, it’s society’s labels that make us believe that they are.

CLICK: Want to see a different side of the Bat? Check out the ten best Batman fan films!

Unfortunately, society has not caught up with Hank’s newfound excrement enlightenment. When he returns to civilization, accidentally into Sarah’s backyard, those around him are confused and disgusted by his body-acceptance, but Hank no longer feels shame. He farts and Manny, his true friend, farts in response. The film ends with Hank happier and looking forward to the day when the world can, unashamed, rip one together. 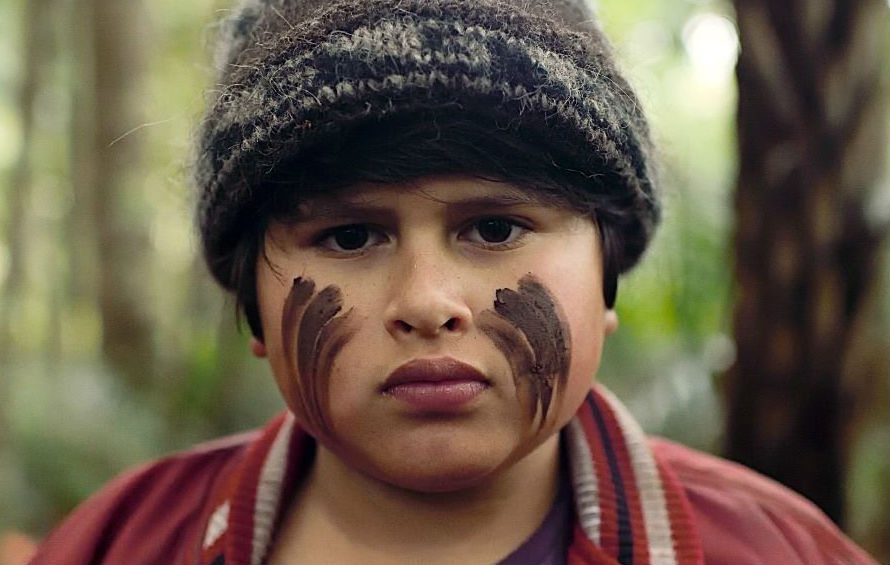 Taika Waititi’s newest film, HUNT FOR THE WILDERPEOPLE, presents its message of body acceptance in a subtle, but powerful way. The protagonist, Ricky Baker (Julian Dennison), is a fully realized character who, in an American film, would likely be the butt of jokes about his weight, or he would be relegated to the role of goofy sidekick rather than the hero.

When you look at films like THE GOONIES, the HARRY POTTER series, and countless comedies, people who are overweight are often cast in two-dimensional roles. Ricky Baker is a fully fleshed out protagonist who is never portrayed as lazy, slovenly, or driven solely by hunger. In this casting choice, Waititi breaks down stereotypes about overweight people and creates a character rather than a caricature. It’s a low bar to be certain, but this casting choice helps to further the normalization of body types and eliminate the need for jokes at the expense of a person’s image.

Waititi’s casting is also deliberate in terms of the character’s ethnicity. Both the actor, Julian Dennison, and character Ricky Baker are Maori, Polynesian natives of New Zealand. Ricky’s journey through the film is the quest of a lonely kid, condemned for being a “bad egg” by child services. Much like his weight, his race is rarely addressed as a major part of his character; it is simply who he is. One crucial scene brings Ricky’s heritage into play when he encounters a Maori family living on a ranch in the woods.

CLICK: What’s the deal with video game movies? Seriously?!? Read this and maybe we’ll figure it out…

At this point in the film, Ricky and his foster father (Sam Neill) are hiding in the bush, on the run from the authorities. Ricky has become a celebrity with his face plastered across news broadcasts. When Ricky meets this family, the father TK (Troy Kingi) fanboys over Ricky. He requests a picture with him and, in a final statement of encouragement, he tells him to “stay Maori.” Up until this point in the film, it’s one of the few open acknowledgments of Ricky’s Maori heritage. While TK is a goofy, rambling character, this comment suggests a level of solidarity and family that, to this point, has eluded Ricky.

Though it may be understated, HUNT FOR THE WILDERPEOPLE delivers a message about body positivity that is moving without being overly preachy. When beauty standards are usually set at a Euro-centric ideal, acceptance of a cultural appearance becomes a step forward for body acceptance. It’s no coincidence that by the end of the film, Ricky ends up living with this Maori family. He has found the love he wants without having to compromise any aspect of himself. 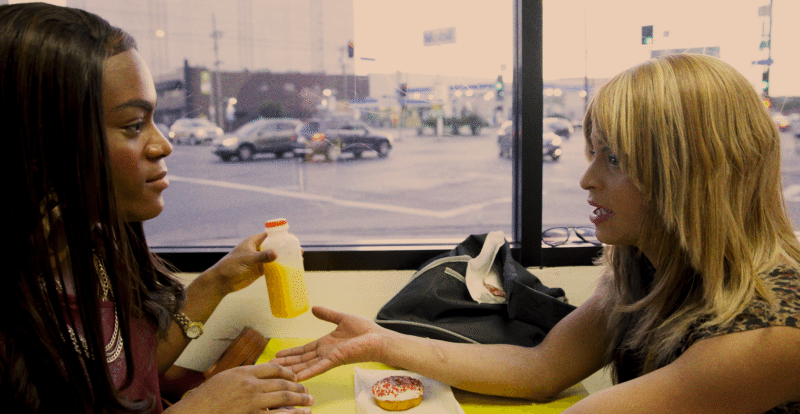 In director Sean Baker’s TANGERINE, the idea of body positivity is explored through the story of two transgender sex workers. Sin-Dee Rella (Kitana Kiki Rodriguez) discovers that her boyfriend, Chester (James Ransone) has been cheating on during her brief stay in prison. What Sin-Dee also learns from her best friend Alexandra (Mia Taylor) is that the woman who her boyfriend has been with is not trans.

This new knowledge only increases the heat of Sin-Dee’s anger. The gender status of trans people in modern America is rejected by numerous institutions, as seen by the countless bathroom laws that have been passed or introduced in state governments around the country. This creates a separation between cis and transgender people. To the provincial types who are against the trans lifestyle, cis is seen as a more “authentic” identity. For Sin-Dee, Chester left her for what society would judge as a “real” woman. Her self-love is based on her desire for her gender to be properly validated, an assertion that is constantly challenged because of the body she was born into.

Sin-Dee goes on a hunt across the city to find her boyfriend and the woman who he slept with while Sin-Dee was in prison. Throughout her journey, Sin-Dee is mocked for the idea that she saw herself as Chester’s girlfriend. Rather than being seen as a woman, Sin-Dee is ostracized for choosing her own gender identity and perceived as an oddity rather than a human being.

By the end of the film, Sin-Dee is ultimately rejected by Chester and left with nothing. As they walk home, a passing car throws a cup of urine at Sin-Dee. At a nearby laundromat, Sin-Dee is forced to take off her urine-soaked clothes and wig. Each of these items is an external signifier of her true identity. Without these articles of clothing, she is stripped bare of the identity she wants and is forced to live in the role that society wants to conform her to.

This scene is a visual representation of her self-esteem at this moment, as she has been removed from the body that she wants by the forces conspiring against her. It is only through Alexandra’s kindness that she rebuilds herself again. Alexandra removes her own wig and places it on Sin-Dee’s head. This simple action is a reaffirmation of Sin-Dee’s identity. It is Alexandra telling her that she defines herself, her identity, and herself, not her appearance or her body.

Film critic Roger Ebert once said that “the movies are like a machine that generates empathy. It lets you understand a little bit more about different hopes, aspirations, dreams and fears. It helps us to identify with the people who are sharing this journey with us.” These three films provide eclectic samplings of life, but are shared by the common bond of self-love.

The characters from these films are outsiders for different reasons, but find through the compassion of others a way to believe in themselves exactly as they are. The empathy shown to them allows the audiences to feel that empathy as well. Hollywood still has a long way to go before it fixes its image problem, but filmmakers are recognizing the importance of showcasing all genders, races, and body types to build a better world full of empathy.