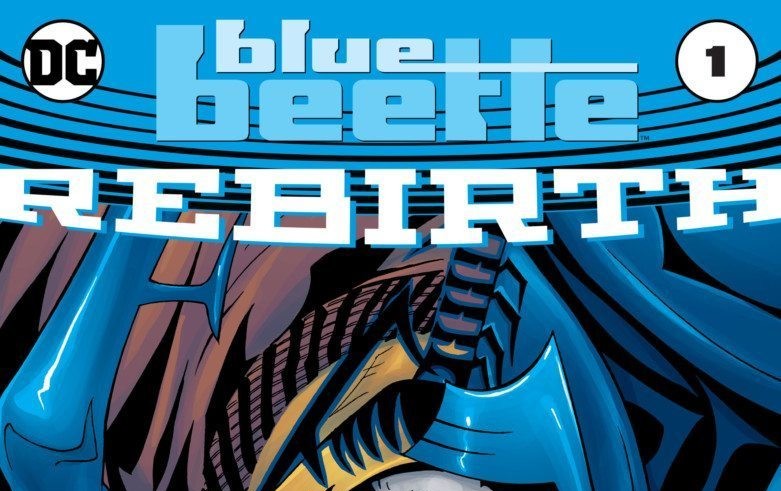 It’s the Blue Beetle with his own title! BLUE BEETLE: REBIRTH #1 is a fun issue from the creative team of Keith Griffen and Scott Kolins. They offer a solid perspective on the character and his life, as well as a strong beginning to the first story arc. Also, we get more information on the short bit involving Ted Kord and Doctor Fate from the DC UNIVERSE: REBIRTH #1 issue and it reminds us that the series has a part to play in the DCU. This is the series featuring a teen superhero that I’ve been waiting for.

BLUE BEETLE: REBIRTH #1 throws Jaime Reyes right into the mix as the Blue Beetle. Billionaire benefactor Ted Kord calls upon Reyes to handle a situation at a nearby coffee shop. The villainous duo Rack and Ruin have been destroying the store for one purpose: to get the attention of the Blue Beetle. Even though they’re a bit goofy, Rack and Ruin are more dangerous than they seem. They’re stronger and more durable than I expected they would be, which makes them a bigger threat to Blue Beetle. I enjoy the fact that they’re hired guns for a mysterious client, since it opens the story up to higher stakes. It brings an interesting comparison to the mentor/protégé dynamic between Reyes and Kord. Could Kord be using the young superhero or is his support genuine? 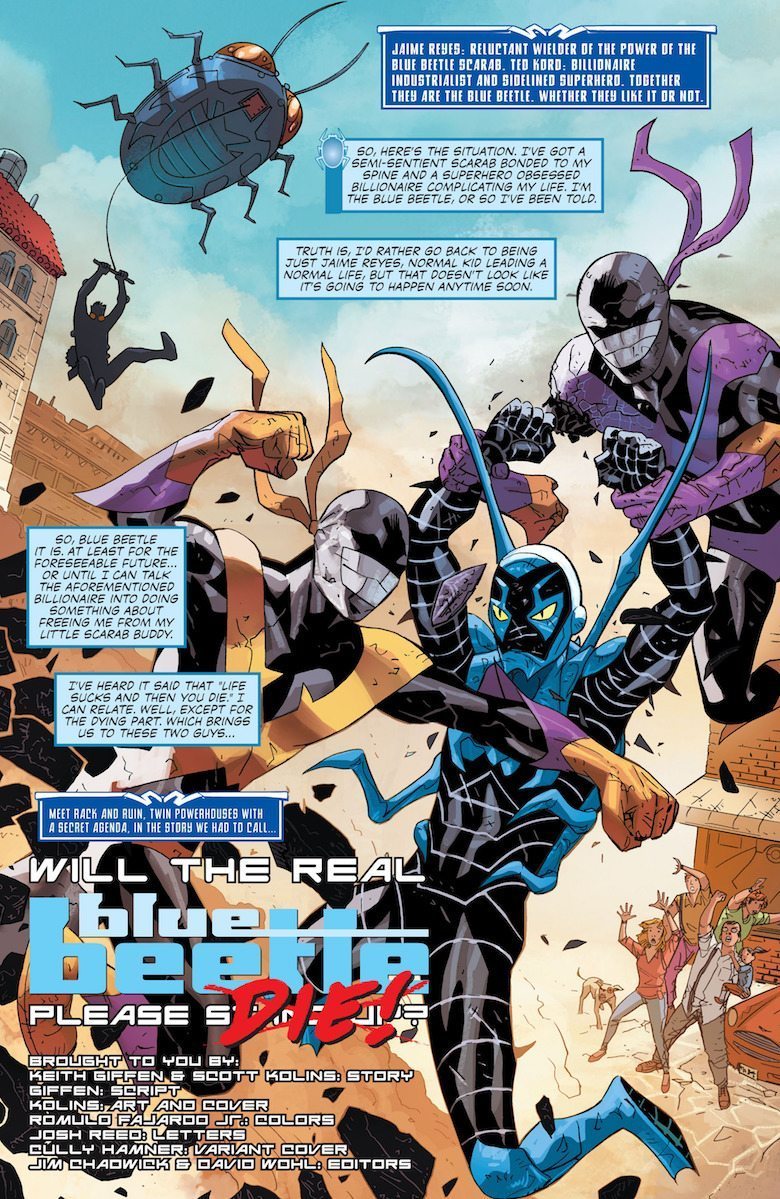 The issue displays Jaime Reyes’s character very well. His life and the trials he faces as the Blue Beetle are easily understood. It’s very refreshing to see the introduction of a character without shoving the origin story down our throats. We get a day-in-the-life type of story that reveals all the parts of Jaime’s existence, such as his friends and family. Most importantly, his relationship with Ted Kord is shown as a normal occurrence. Building a character is very difficult, but in one issue Griffen is able to mold Reyes into someone whom readers can rally behind. However, a detail that is a bit confusing is the blue scarab that gives Jamie the Blue Beetle armor. The armor/scarab is sentient, but it’s unclear how or when it is able to take over the armor with Jaime in it. Hopefully there will be more information on this as the series continues. Should the scarab take full control over Jamie, it could make for some potentially fantastic storytelling.

READ: Go back and check out our DC REBIRTH #1 Review!

The art by Scott Kolins seems to target a younger audience. At times, the character designs are too simplistic, but as a comic book series featuring a teenager it might be better since it may not be as visually confusing. Rack and Ruin are not the most wowing characters to look at, but the Blue Beetle is visually impressive with the character clearly in a suit of armor and equipped with gloriously bright wings. Kolins’ style is a fine mix to show off Blue Beetle’s inexperience in fighting (since he’s a teen after all) and the confusion displayed on his face while talking to Kord via headset. 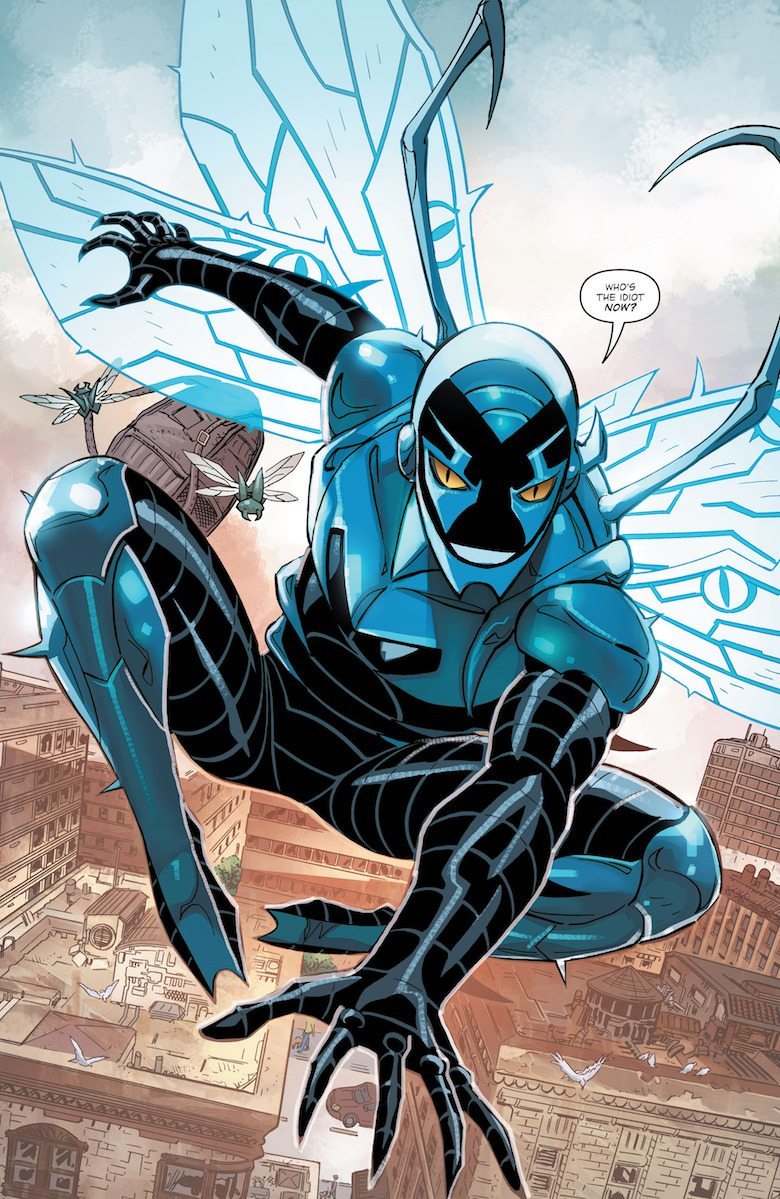 Overall, BLUE BEETLE: REBIRTH #1 is an impressive Rebirth issue that is worth a read. It offers much to those who do and do not know a lot about the Blue Beetle. There’s plenty of story and character development to build off of BLUE BEETLE: REBIRTH #1. I hope to see so much more, including the origin of the blue scarab that Doctor Fate mentions to Ted Kord and how Jaime Reyes’ personal life interferes with his superhero one. Being a young adult is hard enough as it is and adding the career as a superhero makes things so much harder. I expect to see some Peter Parker/Spider-Man type problems for the young Jaime Reyes. I can’t wait to read what Keith Griffen and Scott Kolins have in store for the Blue Beetle!