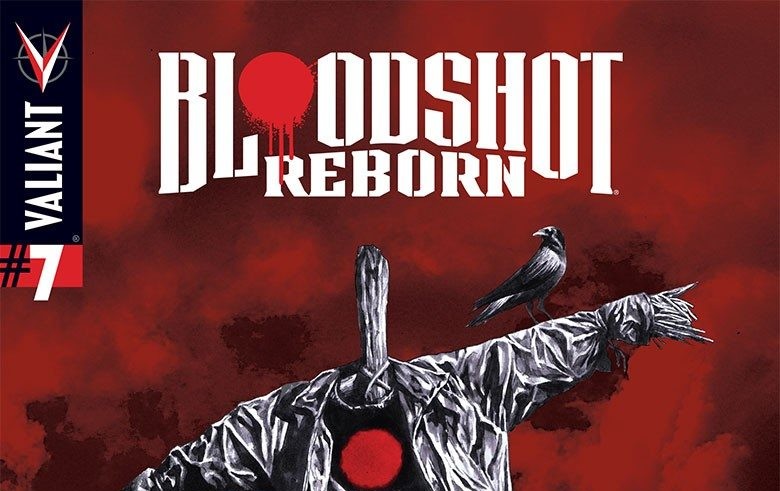 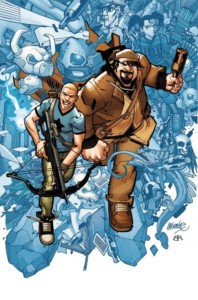 Welcome to another wonderful week in the world of Valiant Comics. If you’re at NYCC (or even if you’re not), you may know that Valiant just announced A&A, a new series centering on fan favorites Archer and Armstrong, with art from new Valiant-exclusive artist David LaFuente. They should have some more exciting announcements during the convention! This week we have another exciting chapter in BLOODSHOT REBORN, where the titular character continues his hunt for his missing nanomachines, plaguing innocents and turning them into murderers, while Toyo Harada fights the Vine in a brand new arc of IMPERIUM. 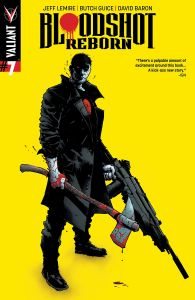 Lemire, Guice, and Baron’s second arc continues in this issue, as Bloodshot and his somewhat reluctant companion Magic (her real name) continue their pursuit of The Hunter, Bloodshot’s latest nanopowered rival. The Hunter murdered several of the infected, and now poses a significant threat to the recovering Bloodshot. This narrative is interspersed with FBI Agents Hoyt and Festival’s investigation into the affair, as they dig deeper into what appears to be the origin of Bloodshot. As much as I like Lemire’s take on the character, I feel like this issue suffered from being an “in-between” part of the story. 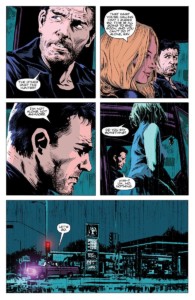 Bloodshot’s imminent conflict with The Hunter is likely going to take place in the next issue, with the fallout addressed in issue #9. As announced this week, issue #10 takes Bloodshot far into the future (and looks awesome) for a Mad Max style story. Anyway, all of that contributed to this issue setting the stage for the next two rather than contributing great set pieces or too much character development.

Butch Guice’s art is as strong as ever, and it works quite well for the style of this arc. While I like this, I’m very excited for the artist change on issue #10—Lewis LaRosa’s released pencils look stunning and most importantly fitting for the new time period and setting. 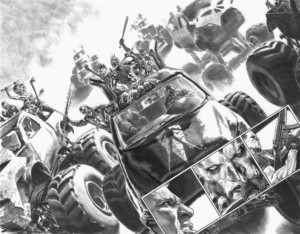 As excited I am for the new arc (and its awesome title, “The Analog Man”), I’ll be a bit disappointed to see the narrative move away from the present, neo-noir storyline. From what the above image suggests, Shadowman’s influence and return to the Valiant Universe will be part of this title as well. Synergy! 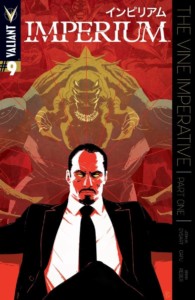 Going into this issue, I knew I was going to find myself comparing it to last week’s BOOK OF DEATH: THE FALL OF HARBINGER. And that’s unfortunate, because wow was that a good issue. IMPERIUM #9 continues Harada’s quest for world peace by any means necessary, in this case worldwide disarmament of militaries.

CLICK: Glenn’s piece on the issues with delayed comic books!

I always enjoy seeing Harada’s plans in action. That’s part of why I liked the FALL OF… special so much–Harada’s world peace/dictatorship(?) was in place and functioning, despite the lives lost and presumed lack of freedom. Many elements from that issue have allusions in this issue, like Sunlight on Snow’s wish to merge his consciousness with the world’s robotics and Harada’s post-scarcity city. However, the human element—those that Harada is murdering to reach his goal—is the most contentious part of his actions. 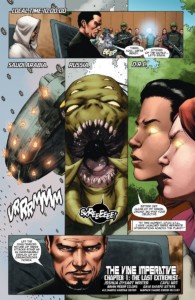 The titular Vine aliens are still in the background, planning to kill Harada and liberate his captured Vine commando LV-99. That is a conflict that I’m interested in. As this issue meandered a bit—well, maybe not meandered, but focused on something else—I was more interested in The Vine’s plan. I suppose there’s time for that; this was only the first issue! 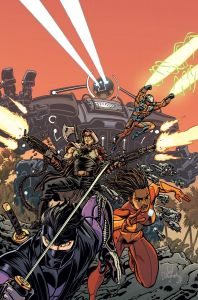 NINJAK #8 continues the titular spy’s quest to eliminate the Shadow Seven, as he hunts down the apparently very talented Fitzy. Judging from his previous encounters, this won’t be easy. Valiant’s longest running series continues its latest arc in X-O MANOWAR #41, as Aric must continue to navigate the tenuous peace between three sides with whom he has ties—and who all want to wage war against each other. X-O and Ninjak should also appear in UNITY #23’s final arc before it’s big farewell issue. Don’t miss it!