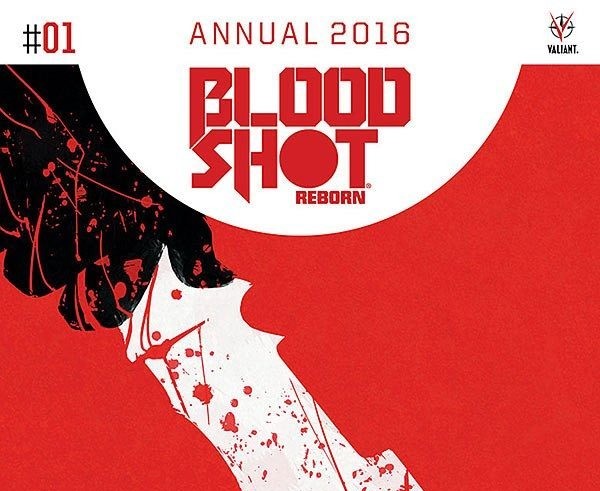 BLOODSHOT REBORN 2016 ANNUAL #1 is four absolutely fantastic stories crammed into a single comic book. What is particularly great about each of these stories is how unique and different they all are from each other. Each one has a completely different style and tone that allows the entire annual to seem fresh throughout its 64 pages. How clearly the creative teams are able to faithfully adapt him to their own unique styles is really a testament to all of the talent involved in this comic and how well they understand the Bloodshot character.

READ: Interested in more from Valiant? Check out our review of WRATH OF THE ETERNAL WARRIOR #4!

Jeff Lemire takes the reigns on the first story, and it feels a lot like a story that could have come from the ongoing BLOODSHOT REBORN series. The tale follows Bloodshot on an assignment to kill the Silver Lake Slasher, a man named Jacob. While it’s a clear play on FRIDAY THE 13TH’s Jason, there’s a lot of heart in this simple story. Jacob is really the star here. It’s not long before Bloodshot realizes everything he’s been told about this assignment isn’t true. The pacing is great and the twist at the end is very satisfying. There are also some very hilarious moments where Bloodshot runs into some unsuspecting camp goers who think he is the slasher. 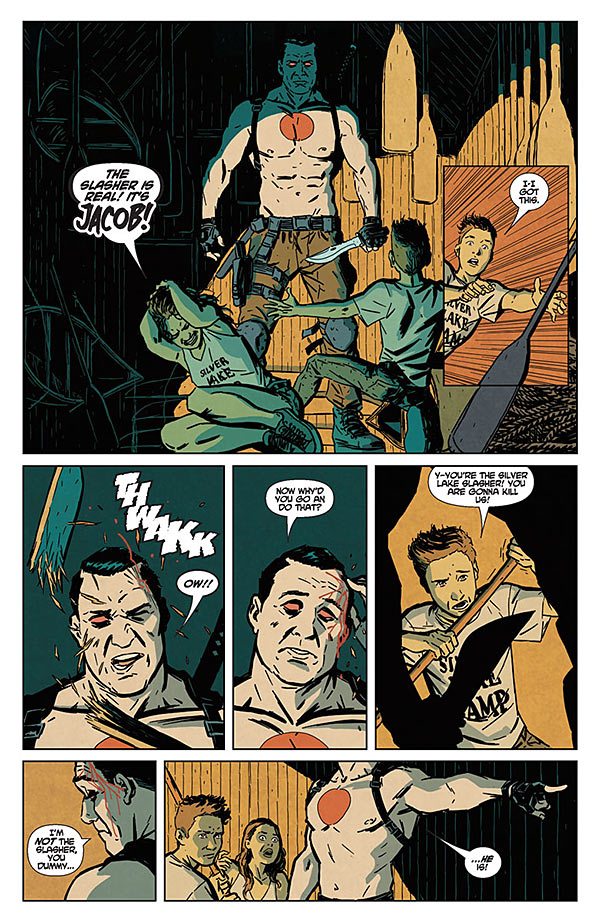 Similarly, the art in the first story, drawn by Kano, is extremely strong. Jacob’s design impresses with his imposing and grotesque frame. The lake is very eerie, and it creates a great unnerving atmosphere for the story. The use of facial expression is also key for the comedic moments. Each character reacts perfectly to the ridiculousness around them, and it helps create a very immersive experience.

READ: For more Bloodshot, check out our look at BLOODSHOT REBORN #7!

The second, and by far the best, story in the annual is also written by Lemire, and it’s hysterical. The entire Valiant universe is fighting a giant robot when the Squirt, a version of Bloodshot from the Squirt-Verse, comes to save the day. He’s eaten by the robot and meets the She-Squirt, who is already inside. The story itself is very basic, but the jokes made at the expense of the comic book industry are amazing. Nothing is safe. Desperate companies creating shared universes to spike sales, lawsuits for using a character name too close to another hero’s (like Squirt-Gwen), and publishing anything because of the creator attached are among the issues Lemire pokes fun at in this story. He even makes fun of himself by taking the reader into the editors room where they discuss whether or not to publish what the reader has just read. It’s a brilliant story that laughs at the ridiculousness of the comic industry in a very intelligent way. Equally impressive is the cartoonish art by Joe Bennett, Belardino Brabo, and Jay Fabares which is a perfect fit for the story. It’s all completely over the top and ridiculous. There is a clear sense of fun in the art that really helps reflect the outlandish nature of the story Jeff Lemire is writing. 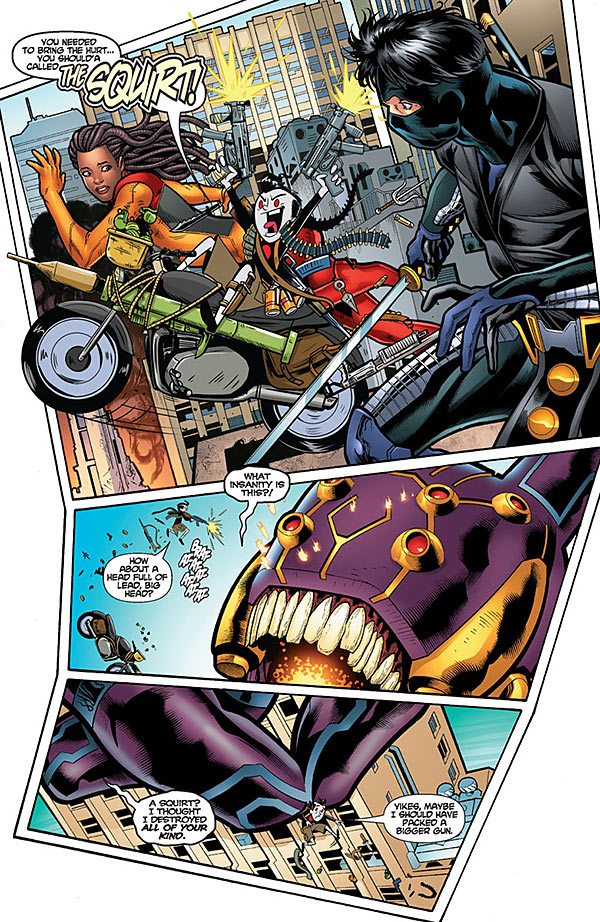 READ: The SUMMER OF 4001AD is coming from Valiant. Check out our preview!

The third story, written and illustrated by Ray Fawkes, returns to Jacob, the Silver Lake Slasher from the first story, and goes through a day from his perspective. This is the only story without humor, instead delivering a story about heartbreak and horror. It feels like an abrupt shift after the first two stories, but the story is so engrossing that it doesn’t ruin the overall flow of the issue. Watching Jacob’s past slowly unravel and seeing the mental demons he has to fight every day is heartbreaking. It is also exceedingly violent and dark. There is a lot of self-mutilation as Jacob battles against the nanites that have been planted inside him and their constant hunger for protein. The nanites allow his body to regenerate, but they also are slowly destroying what’s left of his mind. These moments really help drive home the tortured life Jacob lives, though. Each decision he is forced to make is captivating. It’s a simple story, but it’s told with great elegance.The artwork by Fawkes really brings out the horror in Jacob’s life. Everything in Jacob’s world is in a smeared haze. The only thing he can see clearly is his memories and even those begin to fade and smear by the end. It’s a great design choice that really drives home how twisted and dark the world of Jacob really is. 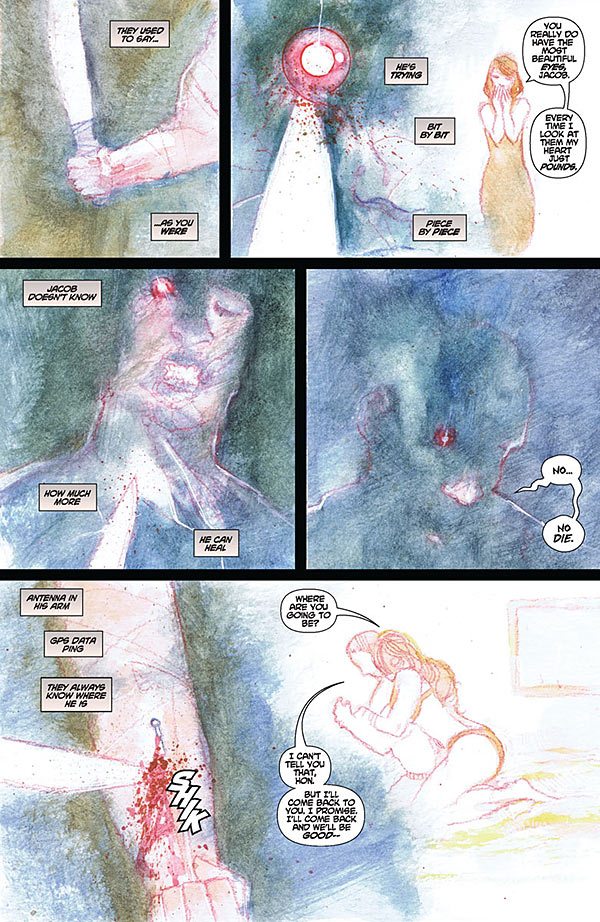 The final story, written by Michael Fiffe with artwork by Benjamin Marda, is the least effective story in the annual. That’s not to say it isn’t good, but it doesn’t reach the heights of the first three tales.This tale is a more humorous take than the third one, but it isn’t nearly as funny as the first two, nor is it as engrossing as the third story. It is also extremely bizarre and at times hard to follow. A group of villains have Bloodshot captured already when the story begins. Their goal is to use the nanites in Bloodshot’s blood to open a portal to another dimension. Their plan actually works until a truly bizarre group of creatures emerge, like the extremely strange muscular torso whose head is a women’s torso.

The story is a lot of fun but fails to reach the comedic heights of the first two stories. The character’s names are worth a good laugh and watching Bloodshot mow down waves of monsters with abnormally large guns is fun. There are also some really funny one-liners dropped, but they are few and far between. What the story does do well is honor the absurd violence of comics from the 80s and 90s. It is clearly trying to be a love letter to that style of comic book storytelling and it pays homage in a very respectful and intelligent way. By itself, this story would be fine, but coupled with the other three in the annual it is the weakest. The artwork, though, is great. The alternate dimension is vibrant, the creatures are all unique, and the action is violent and hard-hitting. It also fits perfectly with the kind of story being told. 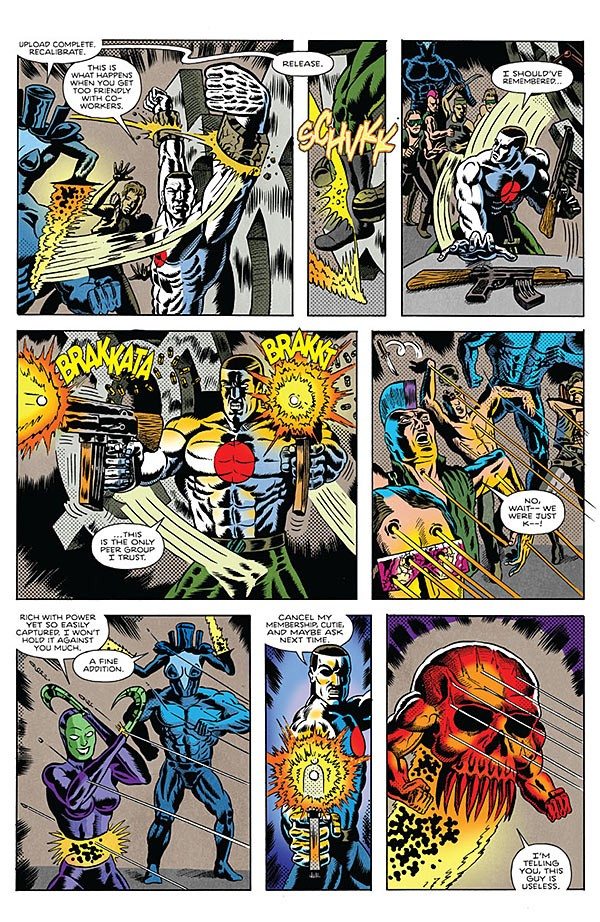 In the end, BLOODSHOT REBORN 2016 ANNUAL #1 is one of the best uses of the annual format I have ever seen. It allows Bloodshot as a character to be flushed out, but it never takes itself too seriously. Even if you haven’t been reading BLOODSHOT REBORN, you can still pick this up and enjoy the amazing work inside. This is a perfect jumping on point for anyone interested in who Bloodshot is.