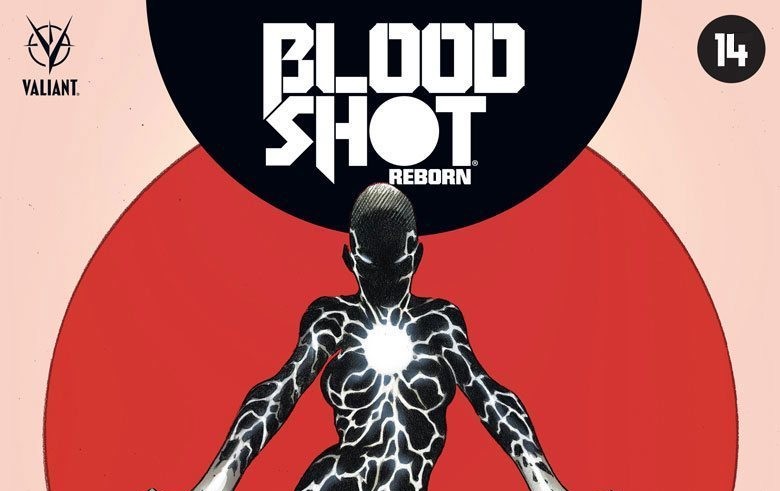 Bloodshot wakes up on an island with no memory of where he is or how he got there. After a quick talk with Bloodsquirt, who may or may not be a figment of his imagination, Bloodshot discovers a group of people—and a dog—with the same powers and silver skin that he has. Each of them has been subjected to Project Rising Spirit, the program that gave Bloodshot his powers, and now each has been captured and brought to the island. With the mysterious Angel of Death constantly hunting them, the Bloodshot crew must find a way to escape their purgatory.

BLOODSHOT #14, at its most basic, is a mystery tale. It’s an extremely simple premise of a man trapped on an island, but it works well because of what makes Bloodshot a unique character: He can’t die. He can be killed, sure, but his nanites will rebuild him eventually, and he will come back to life no matter what is done to him. That’s what makes the fear Bloodshot sees in the others like him so intriguing. Clearly, there is much more going on then we are initially shown. Witnessing the Angel of Death come through and obliterate all around her is not only exciting, but it also helps create a frantic and frenetic comic.

The ending, though, is a bit disappointing. Even with the unique characteristics of Bloodshot, the ending is predictable. It’s kind of a disappointment because the characters in this story have so much potential. They all come from different time periods, with their own unique histories and insights into the larger Project Rising Spirit, making for an extremely interesting setup. Too much time, though, is spent focusing the story on the action rather than digging into who these people are. The revelation at the end of the issue would have been fine if it was done in issue #15, but it all comes across as too much too soon. BLOODSHOT #14 is by no means bad for this reason. Jeff Lemire just creates such interesting characters that it’s disheartening when they aren’t explored as thoroughly as possible.

READ: If you want more great work from Valiant, check our review of WRATH OF THE ETERNAL WARRIOR #8!

The artwork itself is solid throughout the issue. The layouts are very clean and conservative, but they work well with the story being told. The layouts also make for a very readable story, which is perfect when a comic is as filled with as much chaotic action as BLOODSHOT #14 is. Mico Suayan’s realistic art style helps make the violence look even more impactful. Every limb being ripped, every person being stabbed, and every bullet flying through flesh looks extra gruesome because the character models look so lifelike. Similarly, the facial expressions of each character are exceptional. Bloodhound has an especially hilarious facial reaction at one point—the only truly comedic moment in the entire story. The only reason moments like that work is because of the very well done character models. 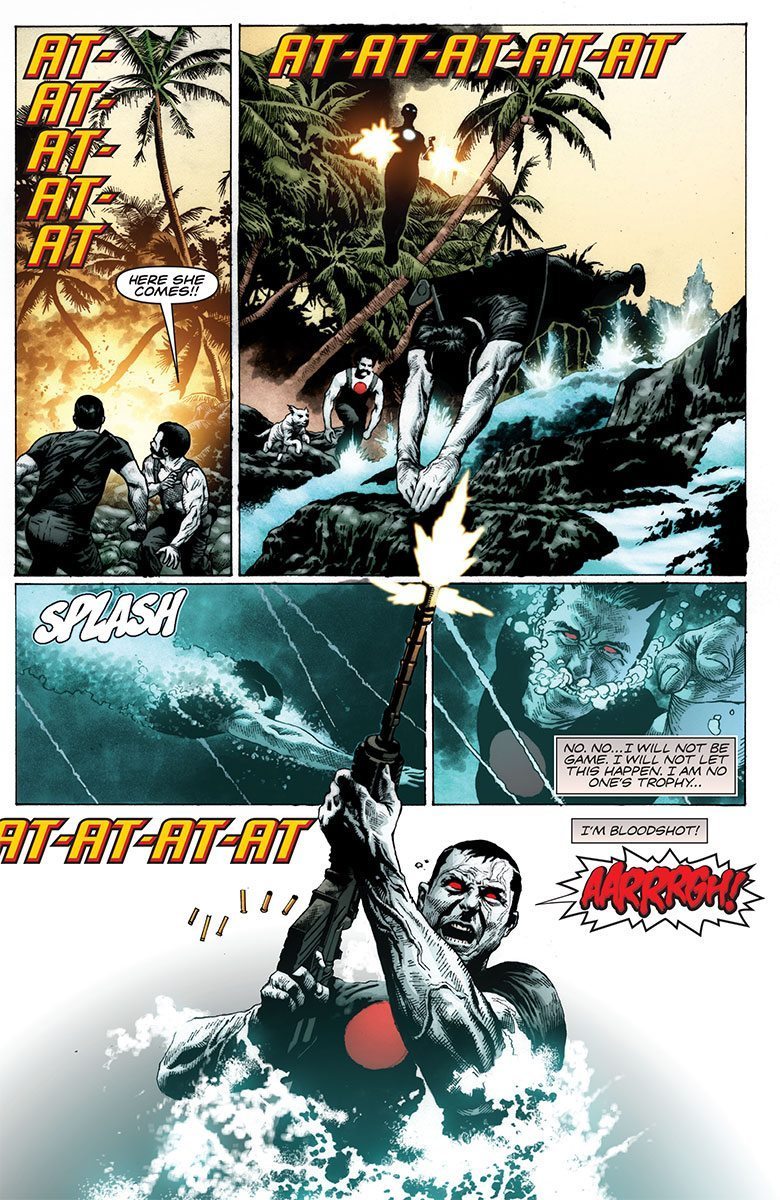 BLOODSHOT #14 takes a tired premise and puts a unique twist on it. The problem is that it doesn’t go far enough with the uniqueness of Bloodshot and falls too quickly into the common tropes of a person trapped on an island. This is still a good comic that could very easily become great. However, this issue isn’t quite strong enough to take the title to that level.