Last weekend, Blizzard unveiled its new eports arena in Burbank, California. Located in the old Tonight Show studio, the arena kicked off with the season one finals of Overwatch Contenders. While the games were fun and exciting, the real treat is the amazing arena that Blizzard has built and the environment they crafted for fans to come together and bond over something they love.

eSports arenas and events are nothing new. You can pretty much find one on Twitch every weekend. Up until this point, it’s surprising that LA hasn’t had a dedicated space to gaming in its immediate area, and it makes sense that Blizzard would be the first to capitalize on that. While they’re far from servicing every game and every fanbase, they’re taking a step in the right direction for their games and, hopefully, this will set an example for other companies moving forward. For a mere $25, fans got two days of fun and intense action. Here’s what it’s like at Blizzard’s Arena Los Angeles.

There’s Never A Good Reason To Put Microtransactions in a $60, Singleplayer Game

The Overwatch Contenders season one championship series took place over Saturday and Sunday. Things kicked off with the semifinals on Saturday, culminating in Sunday’s best-of-seven championship matches, one for the North America bracket and one for the European. Without delving too much into the actual gameplay coverage, the games were exciting and tense. While most of the higher seeds won out on Saturday, the championship games were a dream come true. The EU championship went all the way to game seven, and the NA championship saw fan-favorite player Seagull doing what he does best: kicking ass.

Blizzard Knows How to Impress

Passing through security, one enters the lobby and is greeted directly by the gift shop and its impressive display (shown below). Tons of Overwatch and Blizzard merchandise was on sale. They had everything from shirts and sweatshirts to coffee mugs, Funkos, and even copies of the game. The shelves and walls are covered in statues, photos of past events, and tons of characters from the Blizzard family. 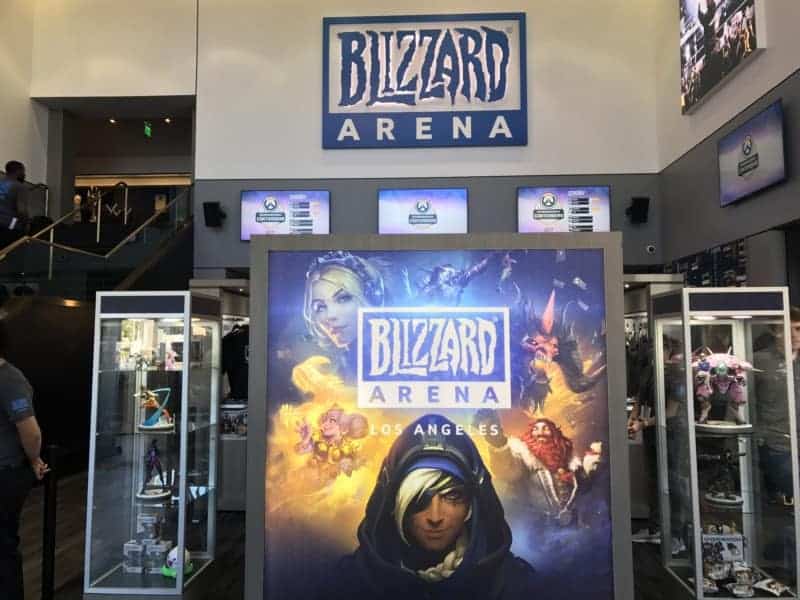 What greets you as you walk into the arena is a slick, impressive sight.

On the top floor, Blizzard has glass cases housing trophies and past memorabilia from other events from all their games, not just Overwatch. There were constantly fans in this room taking pictures and gawking at the impressive array of trophies and Overwatch statues.

The play area itself, the meat and potatoes of this whole thing, is a small marvel. While it doesn’t have much space to work with, Blizzard really puts it to good use. 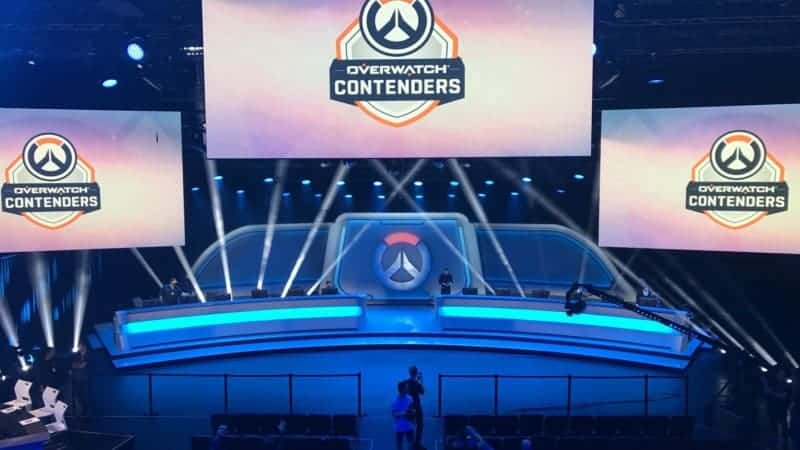 The view from half-way up the stands, just before the first day started.

As shown above, the players sit in an illuminated row with three massive screens for the audience to watch. One would imagine the logo in the middle would change depending on the game being played. Unfortunately, those sitting on the floor had a terrible view of the games being played. For the entire first day, only one brave soul sat down there, craning his neck to watch the screen above and to the right of him. Thankfully, on the second day, Blizzard learned their lesson and installed a few television screens and saw that small section flooded with fans as soon as the doors opened. 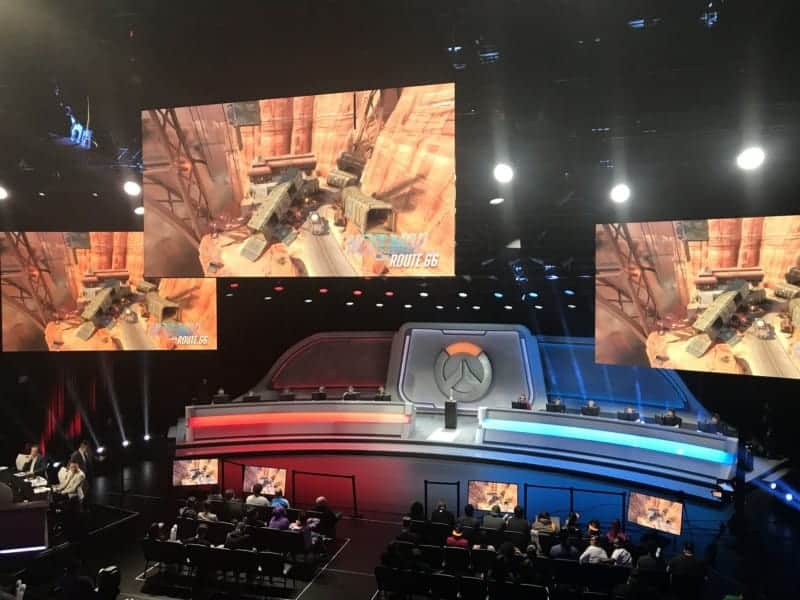 Overall, the Arena is an extremely comfortable and accommodating place to watch the games. The sound was incredible and everything ran smoothly on the screens. Surprisingly, the lighting in the Arena was a ton of fun. One half of the room, red; the other, blue. Commentators sat to the left of the floor, with the actual casters were unseen in some backstage area. The players were close enough to wave to fans and even react to cheers and jests. Additionally, seeing the players emerge from a tunnel beneath the seats and walk across the floor was fun, too.

While it only houses about 450 people, it makes the entire ordeal feel more intimate and allows everyone to watch, participate, and even get on camera every once in a while.

eSports Should Be In The Olympics

Service was, as one can imagine, exceptional. Blizzard spared no expense. There were workers everywhere to answer questions and guide patrons. Most of them struck up a casual conversation when near a fan, and some of them even gave out free swag to the younger crowds in the audience. The cameras were everywhere, pumping up the crowd and showcasing cosplayers.

Sadly, corners were cut when it came to the concessions. Outside food and drinks are allowed, but there weren’t many options inside. Water, sodas, and cold coffee drinks were in abundance. However, the food was limited to chips, pre-made sandwiches, and some granola bars and things of the sort.

Blizzard’s Arena Los Angeles is a fantastic way for them to bring fans together and show off their games. The upcoming Hearthstone event is already sold out. One can bet that anything they do moving forward will meet the same fate.

However, what’s stopping Blizzard from doing a little more? Right now, the Hearthstone tournament is the only thing on the docket. Why not have something every weekend? Even if it’s not something on the pro circuit, why not take advantage of entertainment-hungry and devoted fans and give them something special? Is renting it out to other games out of the question as well? The answers to these are unknown, and time will tell how it all plays out. The intricacies of eSports live broadcasting and running such a venue are beyond this writer.

What isn’t, however, is the fact that Blizzard has a very special place on their hands right in the middle of Entertainment Capital of the U.S.A. The future is looking bright for whatever they want to do with it. Who knows, maybe other publishers will take note and ramp up their own arenas and venues for their games.