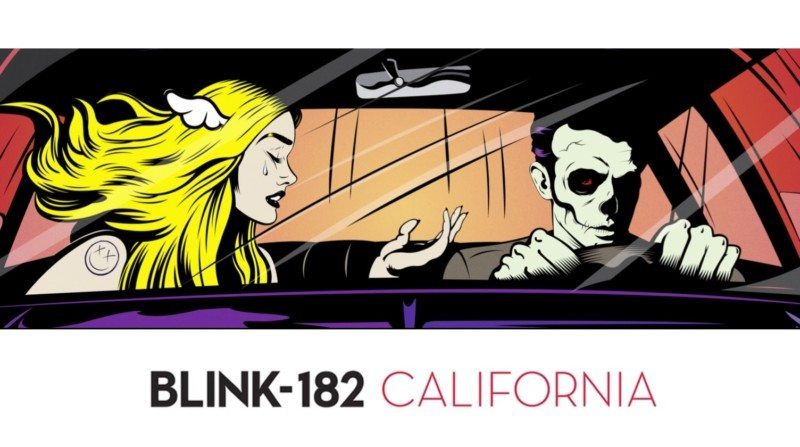 NEIGHBORHOODS is my favorite blink-182 record. There, I said it. The often-disliked, fairly unusual 2011 comeback album had everything this month’s CALIFORNIA, the band’s latest and seventh LP, lacks. There are many reasons this release didn’t resonate with me as strongly as it should have, given that I consider myself a huge fan of very different blink-182 material. Part of the main reasons for this disconnect are maturity and progressiveness; two things this band has been constantly struggling with, eventually leading to dissensions between the members themselves.

Breakout success and youthfulness on ENEMA OF THE STATE

Let’s cast our eyes (and ears) all the way back to 1999’s album ENEMA OF THE STATE. While the more furious fans of the very skate-punk CHESHIRE CAT and DUDE RANCH had already accused the band of selling out, millions of adolescents started to fall in love with the youthful spirit of blink-182’s third studio album. This sort of teenage angst, probably best summed up with the lyrics of “Anthem” (“Don’t need a mom dad slave drive song/ I time bomb, I time bomb, I time bomb”) was delivered in the most provocative way imaginable. The “What’s My Age Again?” music video featured the trio running naked through the streets of Los Angeles, and the album’s title itself contained the word “Enema”. For many teens, the album became the soundtrack of their last few years of High School. Wanting to break up with your annoying girlfriend, inviting your friends to tonight’s party, going away to college, not wanting to grow up – it was all there and it was always catchy, admittedly poppy and fast-paced.

Coming of age on NEIGHBORHOODS

What makes 2011’s NEIGHBORHOODS so special? One of the many answers to this question is: the opening track. “Ghost on the Dance Floor” could barely be more different from ENEMA’s “Dumpweed”, as it opens on impulsive, mid-tempo drums by Travis Barker, alt-rocky staccato guitar and bass, as well as synths that lead into Tom DeLonge describing the feeling of remembering a deceased friend. Let’s take a look at the lyrics:

It’s like the universe has left me, without a place to go.
Without a hint of light, to watch the movement glow.
Where the song was slowly starting, the memory felt so real.
At first against my will, but God invented chills.
Yeah I, I saw your ghost tonight, the moment felt so real.
If your eyes stay right on mine, my wounds would start to heal.

Another example for outstandingly mature lyricism on this album is the song “Wishing Well”, which, on the surface, might seem like a light-hearted sing-along track, but in reality explores dark themes such as anxiety, isolation and desperation.

I can try to get by
But every time I start to panic
I’m a little bit shy
A bit strange and a little bit manic
I went to a wishing well, I sank to the ocean floor
Cut up by sharper rocks, and washed up along the shore
I reached for a shooting star, it burned a hole through my hand
Made its way through my heart, had fun in the promised land

READ: We examine how the music of David Bowie, Radiohead and Kendrick Lamar depict depression!

The hiatus before NEIGHBORHOODS had brought lack of direction, near-death scenarios, and the death of friends and family members to bassist Mark Hoppus, guitarist Tom DeLonge and drummer Travis Barker. DeLonge founded his side project Angels & Airwaves. He would later be diagnosed with skin cancer. Barker experienced a near-fatal plane crash, as well as the death of his friend DJ AM. All of which contributed to the band’s output growing darker and darker. But also less and less immature. The band that previously stated in one of their most iconic songs that they “never wanna act [their] age” had finally grown up. That in itself made NEIGHBORHOODS so remarkable, and it helped blink-182 preserve the authenticity that’s so essential to the fascination around them.

Each member of the band brought a lot into NEIGHBORHOODS, but what coined that record the most were the comparatively grim alternative rock influences – and, on some songs, even synths – from DeLonge’s side project Angels & Airwaves. Many fans have accused the record of sounding exactly like AvA. And while that might be an exaggeration, DeLonge has undoubtedly been the most ambitious in progressing the sound and mentality of blink-182. He neither wanted to keep playing “just three-chord pop-punk with riffs”, nor did he want to sing about his first date for the rest of his career.

Mark Hoppus doesn’t agree. In the recent years, his aim within the band has been to retain a more classic sound. “For us, we were always like ‘Blink is Blink, man. We want to sound like fucking Blink-182.” There has been a lot of bad blood between the two lead singers, this is not the band’s first breakup, mind you. Still, the way DeLonge coined NEIGHBORHOODS worked for me as a listener. And it helped the band find a way to, alongside their new-found lyrical maturity, present musical maturity through experimentation.

CHECK OUT our piece about the resurgence of politics in music!

Fast forward to 2016, in which “Bored to Death” is the first single to be released off of blink-182’s seventh studio album. CALIFORNIA is the first album after Tom DeLonge’s second departure in 2015 and the first album featuring Alkaline Trio’s Matt Skiba as the band’s new guitarist and singer. The music video features a teenager bored in class, then having a blast with his friends, breaking into their neighbor’s pool, and it almost feels as if nothing has changed since ENEMA OF THE STATE.

But things have changed, a lot. Which brings me to what is one of the biggest problems with this new album. A song like “Family Reunion” (the literal lyrics being “shit, piss, fuck, cunt, cocksucker, motherfucker, tits, fard, turd and twat/ I fucked your mom / and I wanna suck my dad and my mommy too”) might have worked back in 1999, but there’s a certain unease and cringe that goes along with someone in his mid-fourties singing “There’s something about you that I can’t quite put my finger in” (on CALIFORNIA’s final track, “Brohemian Rhapsody”).

Now how did we go from their adult 2011 material to “I wanna see some naked dudes, that’s why I built this pool”? This quasi-return to the old humor and lyricism simply doesn’t work. A lot of authenticity is lost on me as a listener and blink-182 struggles with similar things when it comes to the album’s musical style. 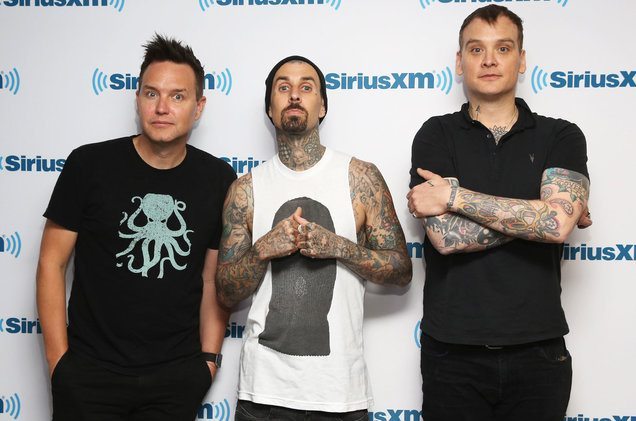 At its best moments, CALIFORNIA sounds an awful lot like 2001’s TAKE OFF YOUR PANTS AND JACKET, one of the most popular blink-182 albums and the follow-up to ENEMA OF THE STATE. Even though I’m not the biggest fan of PANTS AND JACKET, the similarity between the album and CALIFORNIA isn’t necessarily a bad thing but it isn’t progressive either. At its worst moments, CALIFORNIA sounds completely bland, overproduced, and replaceable. The more you try to get into it, the more it seems like an elaborate plan at capitalizing on a whole generation’s nostalgia. The same generation that couldn’t accept the fact that blink-182 was more grown-up on NEIGHBORHOODS. Congratulations, you got your sing-along hooks and party atmosphere back, but it lacks the wit, authenticity and sense of rebellion that made the band so special in the first place. It also completely ignores the band’s potential to be much more than just pop-punk.

There’s a reason this album sounds so much like All Time Low’s FUTURE HEARTS from last year, the epitome of replaceable pop-punk albums with too many filler tracks, “whoa whoa” and “na na” chorusses. It has the same producer. John Feldmann has stated beforehand that he wanted CALIFORNIA to be a return to blink-182’s older style, a return to form. He’s been a part of the songwriting process for every single track on the record and maybe this is part of the reason the entire project feels so forced. While other albums reflected the member’s personal life and calamities, it’s hard to see the purpose or authenticity behind many songs on CALIFORNIA. It’s almost a checklist of sorts. There’s the obligatory party track, a song about a girl the lyrical I is in love with, some slower ballads. This release simply lacks the rawness of ENEMA and the certainty that every song is on the record for a reason.

The addition of Alkaline Trio’s Matt Skiba as the new lead guitarist isn’t so much a problem as is the departure of Tom DeLonge. Skiba’s vocal performance actually turns out to be one of the definite highlights on this album. The songwriting ingenuity of DeLonge, however, is something a lot of fans will miss grievously. It leaves blink-182 without his mature, experimental spirit.

There’s not a single song on CALIFORNIA that comes close to being as iconic and ingenious as “What’s My Age Again?” and “Adam’s Song” – two of the best blink-182 songs of all time. Also, not a single song comes close to being as brave and surprising as “Ghost on the Dance Floor”. Which overall results in the new Angels & Airwaves EP CHASING SHADOWS being a more compelling release than the new blink-182 album, as it reminds us of the strong and earnest alt-rock tracks on NEIGHBORHOODS. Tom DeLonge without blink-182 seems to work a lot better than blink-182 without Tom DeLonge.

None of which is to say CALIFORNIA doesn’t have its redeeming moments. “Bored to Death” is a good mood summer track (at least on the surface). The opening track “Cynical” includes an incredible drum performance by Barker and does a great job at introducing Matt Skiba into the band. Overall, the outstanding tracks tend to be the more lyrically reflected ones, such as “San Diego”. The really catchy and melodic song presents the band’s melancholic glimpse into the past, thematizing their home town and the friend they lost with Tom DeLonge. “California” deals with the emotional emptiness that hides beneath the surface of the Californian suburban idyll.

The problem with CALIFORNIA seems to be that it’s an overly long, often seemingly soulless attempt at recreating something that, for the common good, should stay in the past. NEIGHBORHOODS provided a perfectly fine example as to how blink-182 could retain their special something and still find a modern, experimental and mature alt-rock sound for themselves. At the same time, the band could lyrically delve into darker territory. If Hoppus, Barker, Skiba and Feldmann want to undo the accomplishments of previous releases just to be able to make silly sex jokes again, one must seriously wonder: “what’s their age again?”