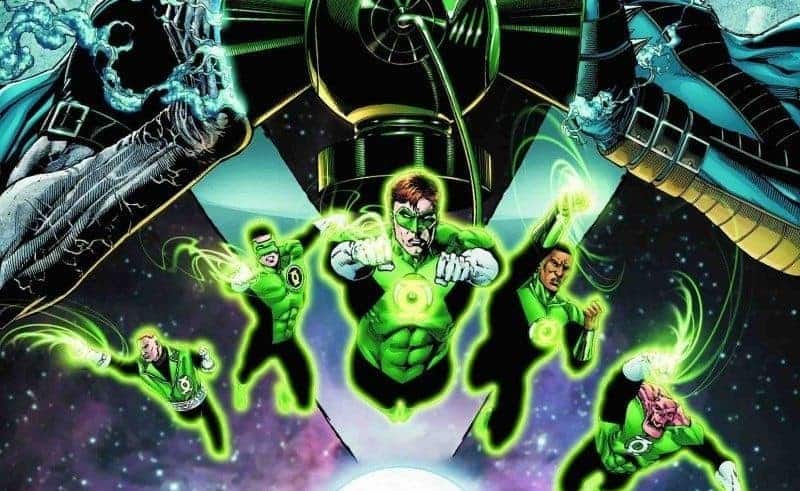 In order to examine Green Lantern we have to look at the period before, during, and now post Geoff Johns. Green Lantern was around for decades before Mr. Johns took over, but Johns was one of the longest writers to ever handle the fearless space cop. Let me provide a brief history before we dive in.

The original Green Lantern, Alan Scott, actually shined his light over dark evil shortly after Batman and Superman in ALL-AMERICAN COMICS #16 , 1940 (Bill Finger and Mart Nodell). Green Lantern was a staple of The Justice Society of America and was a popular character until the end of the Golden Age of comics. This popularity is what led to his re-imagination in SHOWCASE #22 as Hal Jordan, member of the Intergalactic Green Lantern Corps, a hero with a super-advanced piece of alien technology that granted the user their heart’s desire as long as they had the willpower to back it up, as long as the ring was charged once per twenty-four hours, and as long as there was one officer per space sector (which came to a whopping three thousand six hundred). That was until Johns changed it to two Lanterns to a sector, and removed the charge time so that all rings worked on the gas tank, like Kyle Rayner’s ring.

In the 1990s, the period before Johns took over, the hip thing was to deconstruct everything that made up a character in DC. See Azrarel, Artemis, Eradicator, and this one guy who ties this all together, Cyborg Superman. When Cyborg Superman destroys Coast City, Hal Jordan’s hometown, it pushes Hal over the edge. He goes nuts, or as we find out from Johns, gets infected by Parrallax, and takes out the Green Lantern Corps. Johns spins this three part story that was originally panned by the fan base, into this amazing tale where you felt bad for the guy in the end, or at the vey least understood his motivations. We see this right in the startup in Rebirth, where Johns set the stage with Parrallax the foe that embodied the one thing Hal was supposed to never feel — fear.

The idea of overcoming this fear stemmed from Hal watching his dad fearlessly give his life to save the crowd at the air show. Now this element of his father’s death is explored throughout the nine-year epic. Hal questions whether his father was afraid, what his last words were, and is even taunted with this knowledge at one point . We see the theme explored as well with the other Lanterns as Johns shows us that if you understand your fears and how to overcome them, you can affect yellow, which used to be a Lantern’s only weakness. Kyle Rayner never had that weakness, they explain in this moment, because Parrallax was free of Yellow impurity, which the Veteran Lanterns and Guardians would speak of. Since he was free, there was no weakness, same as with John Stewart’s New Ring given to him by Kyle. We also see that ring re-spawn a new ring for Guy Gardner, and cleanse him of his bad 90’s makeover as Warrior.

In the return of Parrallax we also got Sinestro, which was one of the greatest things Geoff Johns did for Green Lantern. He brought the first renegade Green Lantern to the spotlight. His story was one of passion, even after being dealt some of the worst hands. Not to mention friendship, and love. We got to find out that Sinestro is his last name, and that he has a daughter, which is one of the coolest Green Lantern characters. Then we see the creation of the Sinestro Corps, which he admits was made just to make the GL Corps better. We find out that his mind his a steel trap, second maybe to only Batman. Only Hal jordan is the ultimate wild card and he has a soft spot for a few of those he called friend. We see this in the end with Ganthet, and Sayd. Seeing him back as Green Lantern actually made him my favorite, right next to Guy Gardner, especially when he started using the ring in ways Hal never thought of, and he told him that never did train anymore after he left was awesome.

Green Lantern post-Geoff Johns has been interesting, since there is so much I couldn’t even touch base on yet. It includes a decade of epicness that touched Teen Titans, JSA, JLA, and more, especially since all of his stuff has elements that sties it all together. Just like the hints of things to come in Legion of 3 Worlds and the grim future that we see the set up for with the death of all the entities. The only problem is that Sodam Yat is still missing of course. We see Volthoom’s ring reappear in Forever Evil on Power Ring the Cowards hand, slowly corrupting and changing him, like it did the First Lantern. Guy has returned to being a Red Lantern which is the first time that that book is really good to me. No more “Woe is me I am a rage monster but my planet and sector got wiped out because Krona was crazy.” New Guardians continues to be interesting with Kyle Rayner as the torchbearer and mentor to these Guardians of the Universe. I really haven’t scratched the surface. The new Corps, what the symbols and colors mean. How the Original Green Lantern and the source of his powers tie into it all. Trying to condense this all down was harder than I thought. Without a specific area to touch into, nine years of love was insane. I mean I could write a small novel on Blackest Night and the tragic love story between Hawkman and Hawkgirl. When we didn’t see Hawkgirl return in Brightest Day brought me to tears only because I had followed the journey from start to tragic finish in JSA, which now wraps in a GL crossover. The Green Lantern Universe will never be the same, but is forever better because of these moments. So far the new arc has yet to establish anything quite as powerful, but then again, they have been given neither the time nor the tools. So till Evil escapes their Sight, beware their power.