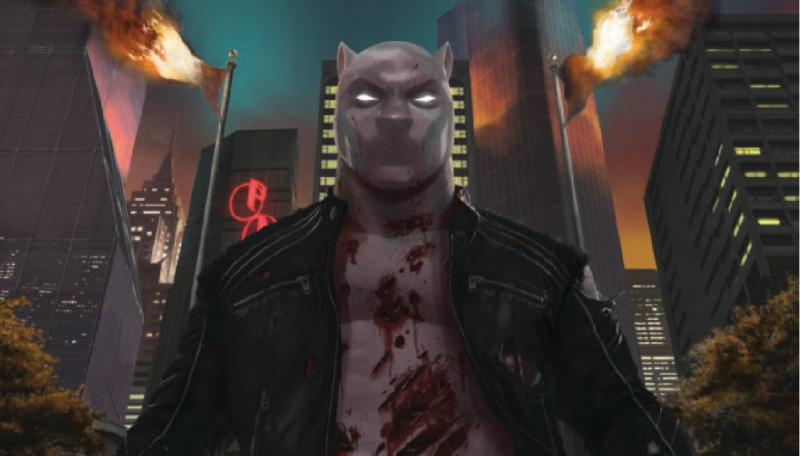 A new story arises from the rich universe of BLACK PANTHER WORLD OF WAKANDA #6 as Kevin “Kasper” Cole takes on the costume of the White Tiger after feeling unfulfilled in his work with the NYPD. Written by Rembret Brown with consultation by Ta-Nehisi Coates and art by  Joe Bennett, the story brings an exciting classic superhero romp to the expanding universe of Wakanda.

READ: Interested in the last issue of WORLD OF WAKANDA? Check out the review here!

With the encouragement of T’Challa, Kasper investigates “Vanisher” who’s said to have stolen raw vibranium. During his investigation, he comes face to face with Cardiac, who’s an unknowing pawn in Vanisher’s game. After a skirmish, Cardiac relents and tells Kasper the only reason he agreed to help steal the vibranium was because his powers were starting to disappear. Once he successfully completes his mission, T’Challa asks Kasper to fight with him, but this time not as White Tiger.

The character of Kasper is a fascinating shift from the previous central characters of the issue. While before BLACK PANTHER WORLD OF WAKANDA focused on bringing about a universe that was alive and vibrant, this issue seems to focus more on hunkering down on a deep study of a character. It helps that Kasper has already done this. Canonically speaking, Kevin Cole acted in the role of Black Panther back in BLACK PANTHER #50. Kasper acted in this role to investigate a murder in secret during a time he was suspended from the police.

In BLACK PANTHER WORLD OF WAKANDA #6, he’s a man who’s been disillusioned by the system T’Challa has in place. Yet despite that he still loves Wakanda. He tried to fight for justice through the police department, but it’s clear that that type of work is deeply unsatisfying to him. It’s only when he acts as an on the ground agent properly dispensing of villains that the character appears to understand he’s actively making the world a better place.

There’s a certain anxiety Kasper has in becoming White Tiger again, even if briefly. It’s clear he’s apprehensive of T’Challa’s leadership, unsure if he can rule Wakanda the same as his sister did. This anxiety the people of the country feel remains an important part of previous issues, but ultimately their loyalty to the crown remained. That’s not exactly the case here since Kasper hasn’t sworn loyalty to the monarchy system. He’s a fighter, yes, but more of one on his own. It’s a fascinating juxtaposition from the previous storyline.

One of the things that stuck out to me the most in this issue where the fight scenes. The previous five were action packed but they were mostly about the love story between Ayo and Aneka. As such, those were the moments that seemed to have gotten the most attention. Here, it’s all about Kasper giving good ol’ vigilante justice to the bad guys. The panels during these scenes almost completely disappear in favor of full page art. The movements are fluid and quick, Joe Bennett choosing to blur the action as much as possible to give the reader a realistic sense of movement.

BLACK PANTHER WORLD OF WAKANDA #6 is bathed in shadow, a far cry from the iridescent lights of previous issues. It helps give off a sort of noir-styled narrative. After all, Kasper is attempting to track down villains in the dead of night. As such, it wouldn’t be appropriate for neon yellows and purples to fill in space. It also gives a form of gravitas to the work. Kasper’s been down this road before, he knows what type of life he’s entering into. It’s not new and exciting but potentially dangerous. He has a normal life now, would he be willing to risk it for Wakanda once again? These dark colors accentuate this inner turmoil and uncertainty beautifully, truly encapsulating a noir comic.

At the end of the issue, T’Challa tells Kasper how much the people need him, but oddly not as the White Tiger. As they talk there’s something in the background that heavily foreshadows Kasper’s role in the remaining issues. The comic invites the reader to speculate on this, as a sort of hook for the next issue; but also as an invitation to read the running BLACK PANTHER series. The open ending leaves the possibilities for future stories an exciting prospect. At the very least while we wait for the next issue, we can figure out what exactly T’Challa has in mind for Kasper.

BLACK PANTHER WORLD OF WAKANDA #6 is a definite shift from the previous works, but not in a bad way. It certainly helps to mix things up from the vibrant locations of the last issues to a much more noir-ish looking world of New York, but with the classic superhero’s call to duty we all know and love sprinkled in. So far, it’s shaping up to be a fun story.