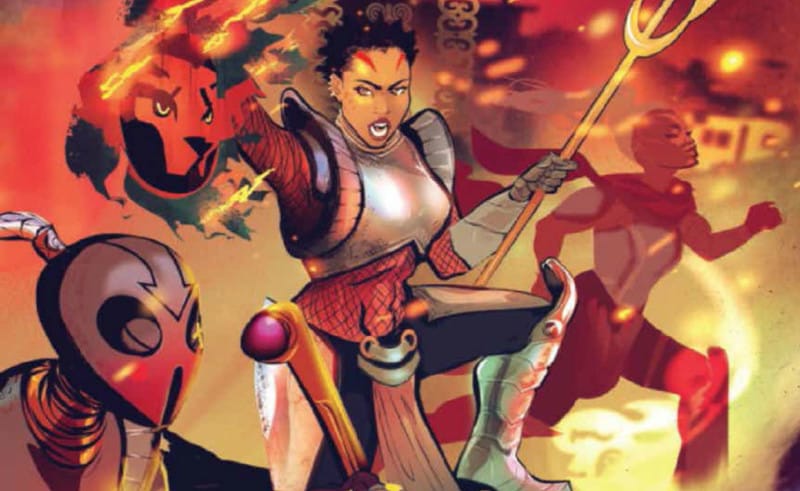 The conclusion of Ayo and Aneka’s tale of romance and war has finally arrived in BLACK PANTHER: WORLD OF WAKANDA #5. Previous issues have taken us on an emotional journey as both women struggle to keep their love afloat and their nation safe. With Black Panther’s absence in Wakanda, we get a tale that focuses heavily on the strength of these two women and the other members of the Dora Milaje.

LISTEN: Eager to learn more about Black Panther and his origins? Check out our podcast on the topic!

In the finale, we see the aftermath of Aneka’s imprisonment for killing Folami’s father. Fueled by anger, Folami’s quest for vengeance leads her to Aneka’s cell. There she makes Aneka aware of her plan to destroy everything she loves. This was specifically painful to read because of how well Ayo and Aneka’s relationship was built. Throughout the 5 issue run, we see their love progress mainly because of the plot. But that’s the thing: this isn’t a story about Wakanda in danger and how they will fight off the next threat. Instead, it’s a story about their love and how the threats around them impact it. 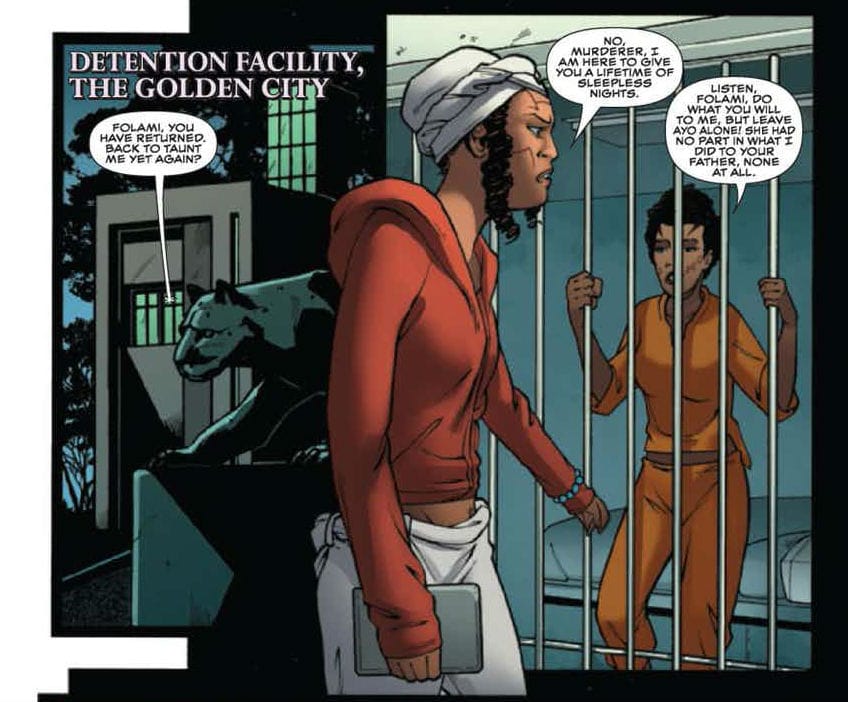 There are several moments in the overall series that test Ayo and Aneka’s relationship, but the strongest threat is their mortality. When Ayo’s life is threatened, we can see how much Aneka cares for her. With consulting from Ta-Nehisi Coates, writer Roxane Gay carefully constructed their relationship over the course of the series, and it truly comes together in these final pages.

It’s important for comics like this to be highlighted in times that so easily try to diminish the strength of women. Gay’s writing illuminates that in several moments throughout issue #5. One page specifically shows a conversation between a Wakandan police lieutenant and the Dora Milaje. The lieutenant argues that there are no leads and he will not be talked to rudely by a “glorified servant.” After hearing this one of the Dora Milaje forcefully grabs his arm and tells him that if he does not do his job, they will. That’s just one example of how these women are demeaned because of their sex. This discrimination doesn’t stop them though because the Dora Milaje are quick to use physical prowess to suppress their aggressors. These protectors are more capable than their male counterparts. It is, of course, the reason they are trained to protect the kingdom of Wakanda. 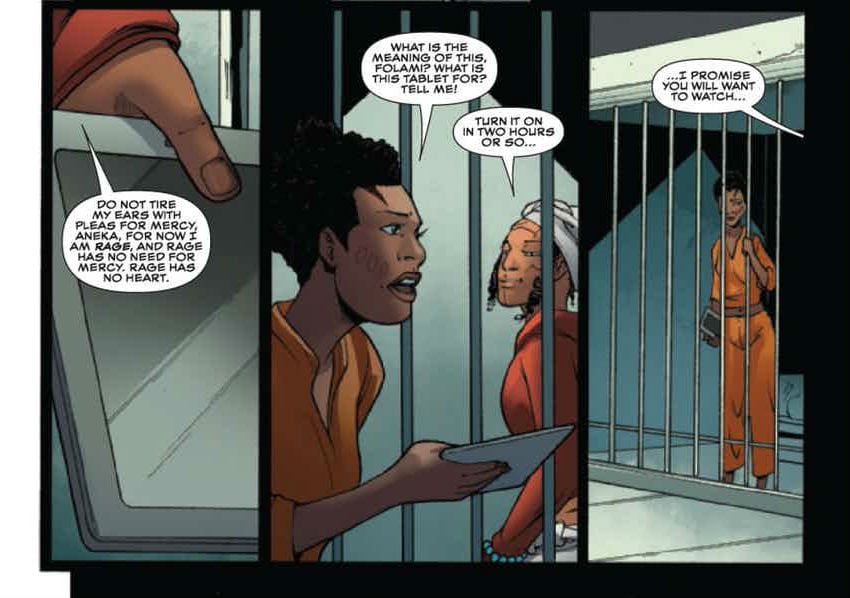 There’s no single “strong female character” in this story because almost every panel has one to offer — my favorite being Mistress Zola, whose influence on Ayo and Aneka’s relationship may have been stronger than they will ever know. She worked as a guiding force for both women and had always been aware of their strength united.

Another important thing to note is the fact that Ayo and Aneka’s relationship was never seen as wrong or forbidden. It did not matter that they were both women, nor did it change the way other characters interacted with them. The reason their relationship struggled was that of their professions, not social acceptance. It’s a strong statement about the LGBTQ community. Love is love in this story, simple as that.

Artist Alitha Martinez’s penciling is great for the issue. Her character designs come together in an issue that focuses on so many of the Dora Milaje women. At no point does it become difficult to distinguish the characters, because she gives them each unique and defining traits. This distinction is also something that goes with the setting. Even when we are told about a location change through the text, it’s made clear through the inclusion of environmental details such as vivid trees or cluttered vendor tents. Martinez fluidly syncs both the thriving nature and its highly advanced technology. At no point does it seem illogical for us to see to see high-tech flight suits traveling through a vast forest. 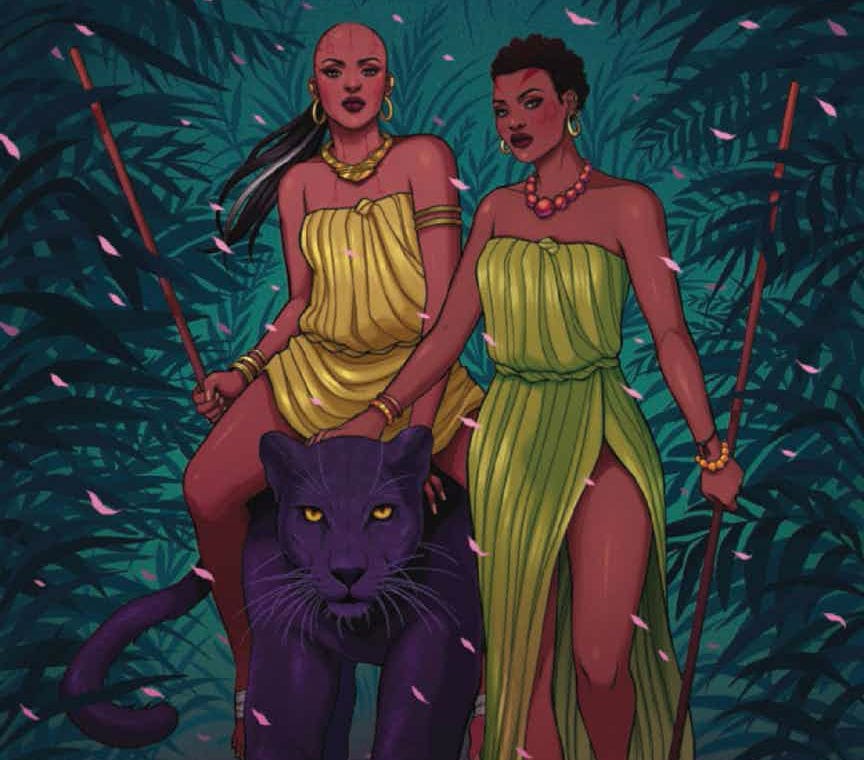 A slight problem I did have with this last issue was the quick transitions between scenes. It seemed quite often that the story would hop around or skip days. I found myself occasionally backtracking to see what the connections were between each shift. It was sometimes awkward to follow but ultimately did not diminish the story’s direction.

READ: Want to learn more about the world and culture of BLACK PANTHER? Check out our article on Afrofuturism!

BLACK PANTHER: WORLD OF WAKANDA #5 is a strong piece of feminine empowerment and highlights an aspect of the comic book industry that needs more visibility. Comics are going a long way in the right direction if more stories like this can be developed. The more we can openly discuss love and its many forms, the more accepting and welcoming our world can be.