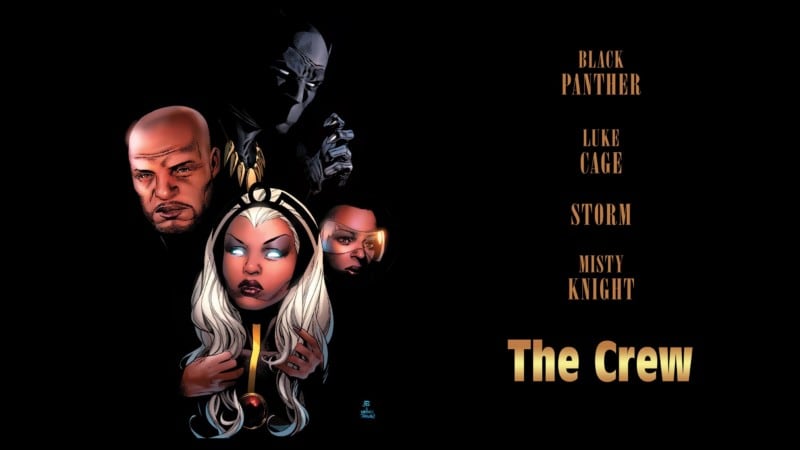 Co-writers Ta-Nehisi Coates (New York Times best-selling author of Between the World and Me and Marvel’s BLACK PANTHER) and Yona Harvey (BLACK PANTHER: WORLD OF WAKANDA) team up to bring T’Challa, Storm, Luke Cage, Misty Knight, and Manifold into one comic — BLACK PANTHER & THE CREW!

In BLACK PANTHER & THE CREW, a bizarre wave of crime hits New York City when the death (possible murder?) of a Harlem activist kicks off a mystery that spills new secrets about the history of the Marvel Universe! No doubt, this comic will have ramifications for years to come.

The presence of BLACK PANTHER & THE CREW is yet another leap by Marvel towards making American comics consistent with the makeup of the American people. Marvel’s effort to take responsibility and diversify its cast of characters is admirable, and BLACK PANTHER & THE CREW consisting of a team of entirely Black characters is only one more example in their effort that gets it right.

Marvel is no stranger to breaking ground when it comes to pushing the envelope and appropriately representing a sample of the United States. Beginning in the modern era of comics, characters like Ms. Marvel, America Chavez, and Riri Williams are representatives of a contemporary America. While diversification of comic characters might seem like a new phenomenon, look no further than the 1975 reboot of the X-Men in GIANT-SIZE X-MEN #1, with the introduction of characters like German Nightcrawler, Russian Colossus, African Storm, Japanese Sunfire, and Apache Native American Thunderbird as an early attempt to make comics more diverse. Likely learning from such an experience, co-creators Chris Claremont and Bob McLeod developed NEW MUTANTS in 1982 featuring a Native American leader, Dani Moonstar, a Vietnamese refugee, Karma, and Sunspot from Brazil.

While comics fans crave their crossovers and big events, if you ask someone what their favorite moment in their favorite title was, you’d likely get an answer consisting of a single issue or arc that had emotional consequences, rather than fallout from an epic battle. The cast of BLACK PANTHER & THE CREW in addition to a New York City crime wave and the exposing of secrets of the Marvel Universe promises to be such a story. All the pieces seem to be in the right place, from great creators to amazing characters, to make BLACK PANTHER & THE CREW a Marvel classic.