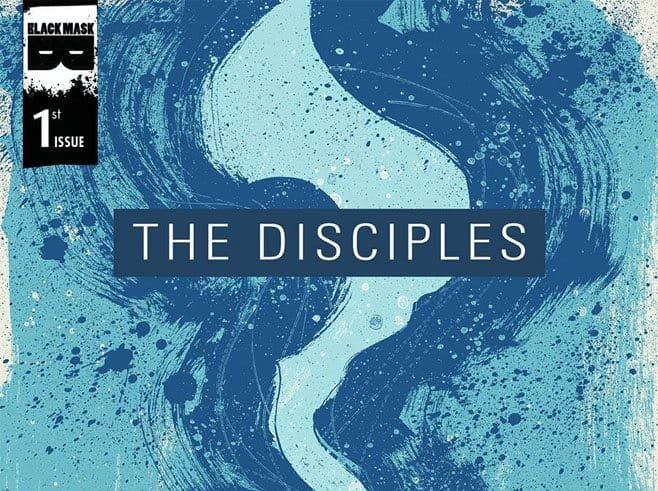 Writer Steve Niles and illustrator Christopher Mitten work together to deliver a chilling ghost story in space from Black Mask Studios! “The Disciples” is a story that will both intrigue and frighten its audience.

The comic opens with one of the three private eyes/bounty hunters, Jules, having a nightmare about her crew. She is awoken by her teammate Dagmar who informs her that their leader Rick is calling them to their ship, Starship Venture. They set out on their mission to retrieve the teenage daughter of a high ranking Senator who has run away from home and joined a religious cult in Ganymede, one of Jupiter’s moons. The cult is run by a crazed religious freak named Mccauley Richmond who is also insanely rich due to his pharmaceutics. They eventually arrive to Jupiter, but they must take refuge since they need to wait a few hours before reaching Ganymede. After they take off their suits, Rick notices the door to the dining room has been closed. Dagmar is more concerned with the creature coming out of the door, which looks like a cross between Alien and the girl from the Ring. 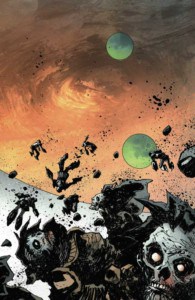 I’m a sucker for interplanetary space travel, and this comic really delivered. The artwork of outer space was phenomenal! I loved the fact that the characters were also in awe at the sight of Jupiter and its moons. It allowed the audience to relate to them more, showing that even though they came here for a job, they can’t help but love the view.

“The Disciples” is a breathtaking comic which truly epitomizes what a comic should be- magnificent artwork and a compelling story. Steve Niles and Christopher Mitten have worked together in the past, and this comic is more proof that the two can create good work. The best moment of the comic for me was when they traveled through space witnessing all the stars and moons passing them by. Since the comic is essentially a ghost story in space I can hope that I shall see more scenes in space.

While this first issue was entertaining it did not show us as much of the horror aspect of the comic. But this is only the first issue which sets up the plot and the characters, so I will keep reading to see the horror aspect. The of space location for a horror story is an excellent choice since space is just as scary as it is beautiful. The first issue ends with a promising cliffhanger that shall only make their mission go from bad to worse. I definitely recommend this comic series and I will certainly check out the rest of the series.