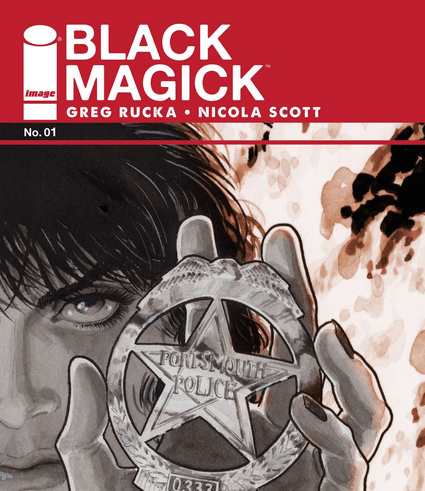 Greg Rucka and Nicola Scott introduce us to a beautiful new concept, one steeped in Pagan lore and introducing us to a whole new world of magick!

BLACK MAGICK opens at the Fall Equinox, as a Pagan ceremony takes place.  It’s swiftly interrupted, and we’re soon following the hero, Rowan Black, as she rushes to a crime scene.  She’s a police Detective, there’s a hostage situation, and the perpetrator will only speak to her.  Soon, we’re plunged into a fascinatingly mysterious narrative in which the criminal threatens Rowan Black’s life.

READ: Interested in magic?  Check out our review of DOCTOR STRANGE #1!

Rowan Black is easily one of the most intriguing characters I’ve seen in comics for a long time, largely because Rucka has created a character who has her feet firmly planted in not one but two worlds.  She’s the star of this issue, with background cast fleshed out in only the barest details, but enough to make her contradiction clear; there’s beautiful symbolism, as her opponent literally strips her bare of all the accoutrements of civilisation and the police force, exposing the magick within.

Rucka has pulled off a brilliant piece of characterisation.  He’s introduced us to a new character who’s full of contradictions, and whose life is complex and confusing; and even though we hardly get the sense we ‘know’ her just yet, we know that we’re going to enjoy getting to know her.  The use of conflicting aspects of life in order to generate complex characterisation is nothing new to comics, of course; in superhero comics it’s pretty standard fare, with secret identities abounding; but Rucka’s smart magickal twist makes this one of the most entertaining cases in a long, long time.

Nicola Scott’s artwork is absolutely gorgeous.  The open scenes in the forest are among the most beautiful I’ve seen in comics, and the level of detail in the Pagan festival is fascinating.  I love her mastery of facial expressions, as he shows the reaction of the Pagans to the, ah, interruption (I’m not going to spoil it for you).  But there are three moments where her art really shines; the first is the moment where Rowan arrives on her motorbike (I share the view of some letter-writers that Rowan should travel by motorbike all the time), the second is the aforementioned scene where Rowan is stripped down.  I love the effectiveness of the artwork, avoiding the traditional comic book super-female physique while still keeping Rowan attractive. 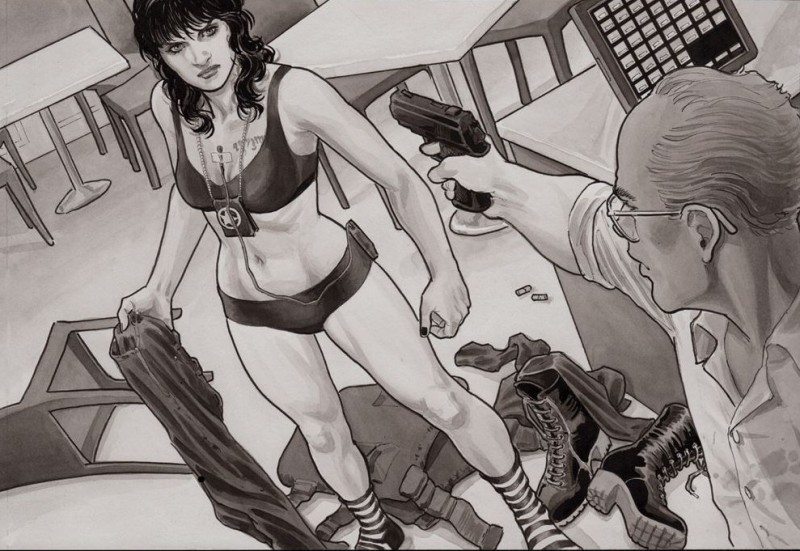 But the third is the defining moment of the comic, lifting this above ‘good’ comic books and into ‘epic’.  To explain, Scott takes an extremely minimalist approach to colouring, right up until the end, where she focuses in upon Rowan’s face as she weaves her spell.  What follows is a moment that I simply cannot describe without effectively ruining the comic for a new reader, so all I’ll say is: Wow.

It’s worth noting that I managed to pick up a special edition of the book (priced at $5.99), featuring exclusive interviews, features on how the artwork was created, and a wealth of background content.  I wholeheartedly recommend this more expensive book, as it makes it clear just how much work the creative team have put into it.  Plus, as someone always interested in the inner workings of the comic book world, it’s a fascinating glimpse behind the curtain.

I simply can’t recommend BLACK MAGICK highly enough.  This debut issue is one of the strongest comics of the year to date, and I for one will be following this series avidly.