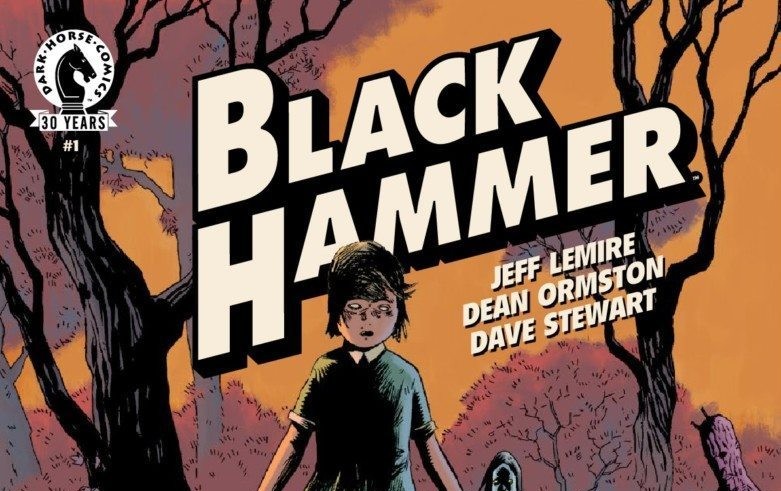 You know that feeling when you see a perfect pancake? When you look down at the pan and there are no warbled edges, no burnt crust. Just a perfect, glorious circle. And as you stare, mute before its glory, its symmetry nearly blinds you? That’s the feeling I had reading the first page of BLACK HAMMER.

This is a book that works.  This is the kind of book that doesn’t come around often. From front to back, its pages throb with the assured strokes of creators who understand comics. BLACK HAMMER is the face that stands out from across the room. It turns your head and earns your attention.

READ: Fan of pancakes? So is Hellboy! Read our review of HELLBOY AND THE B.P.R.D 1953 to catch up on some of his latest adventures!

A new offering from DARK HORSE, BLACK HAMMER #1 tells the story of a once proud superhero team mysteriously banished to a quiet farming town. It’s a dark mystery, a poignant family drama, and an examination of loss, aging, and how we choose to live when we lose the things that make us feel alive. 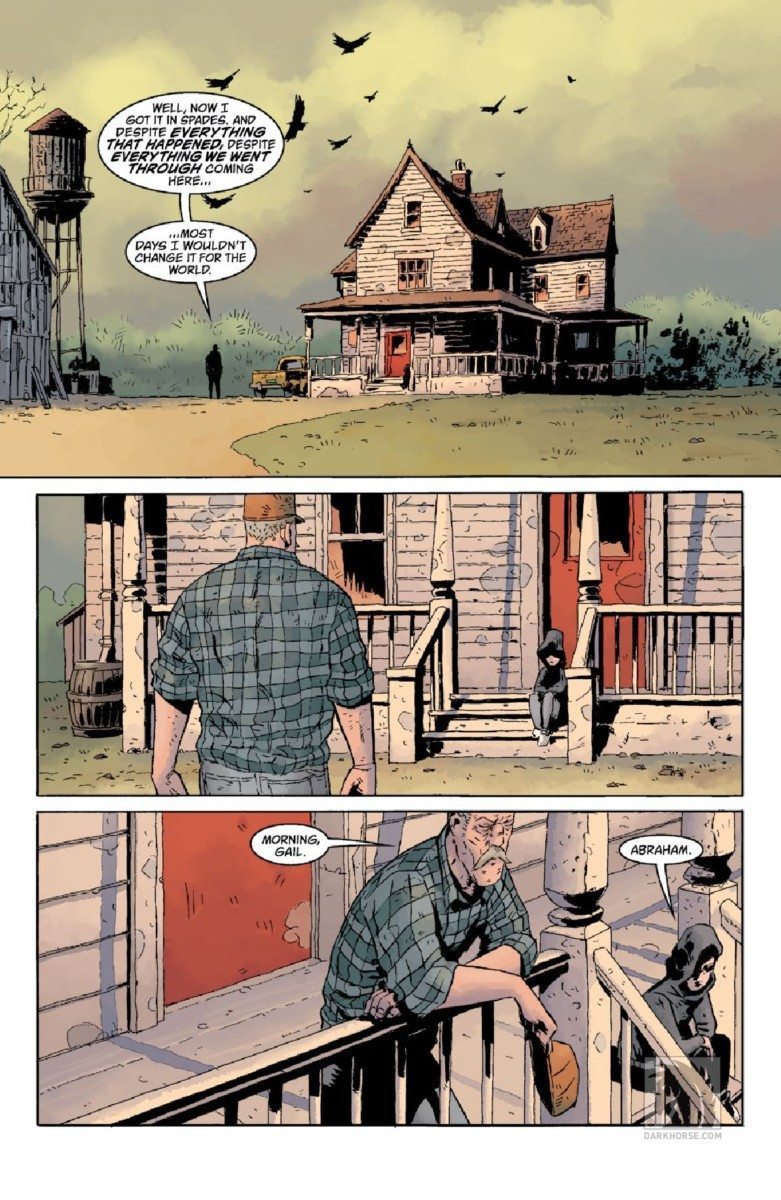 BLACK HAMMER hits a home-run from every angle. The characters are full-bodied and dynamic. I can only imagine that they lived in Lemire’s head for years before they were ever committed to the page. They are entities all their own, secure in their identities and their histories. Ormston’s artwork complements the maturity of these characters, rendering even the most delicate facial expressions and body language visible, while conjuring environments that appear lived-in. Stewart, seemingly as always, brings the right colors to each moment, from the dark, muted hues of the farmhouse scenes to the bold, rich colors of the Silver Age sequences. It’s the kind of art that triggers a dopamine rush; it’s just plain good to look at. Ultimately, the confluence of talent that is BLACK HAMMER offers a well-paced story that is not only entertaining but chances to offer, especially in later issues, cerebral reflections on what it means to be a comic book superhero. 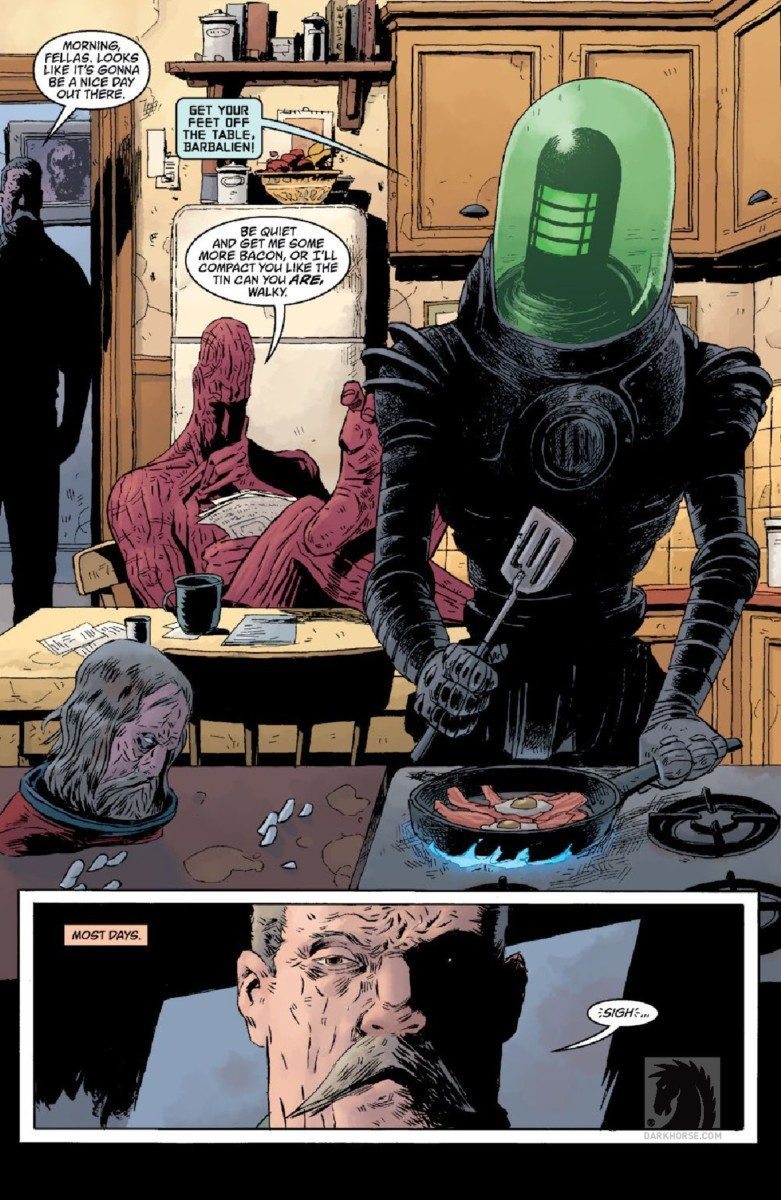 The heroes of BLACK HAMMER are Silver Age heroes, hailing from a time when justice was bull-headed and evil easily recognized. However, these heroes were mislaid. Driven from their confident positions as protectors of Spiral City, they found themselves trapped in a sleepy farm town, made to be content cracking eggs instead of skulls. In a way, these heroes’ teleportation from the surging bravado of a Superhero City to a decidedly more introspective locale mirrors the changing tastes of comic book readers. In the 1980s and 1990s, comic fans began to favor books that probed beyond the machismo of the crimefighter into the tortured, human hearts of these figures. Along the way, the heroes of the Silver Age were usurped. Thus, this comic feels, in its first issue, like a treatise on the history of how America reads the superhero.

LISTEN: Explore the cultural impact of the X-Men in this week’s Comicsverse podcast!

From exceptionalism—the feeling we can always solve our problems—to existentialism—the feeling that our problems are ultimately too large to solve—American perspectives on threats and how to deal with them have also changed. Back in the Silver Age, it only took a fair ration of bravery and a well-placed left hook to defeat any hazard intent on bullying civilization. Since then, the battle cry of human exceptionalism has been muted by empirical data that shows how staggeringly minuscule our once “exceptional” bodies and minds truly are. The unknown now looms greater and more menacing than ever before. Where we used to worry about being outmatched by a worthy foe, our present existence is threatened by existential dangers of which there is no possibility of us being more powerful in the first place. Ravenous black holes that defy conception lurk in the corners of a similarly unfathomable universe. We sit in front of computers more powerful than our minds, as mutating pathogens ask researchers to retaliate faster than they know how. Just as the validity of exceptionalist ideology has been undermined by a more sobering appraisal of our own abilities, thus the Silver Age heroes which embodied the triumph of exceptionalism have become irrelevant to the modern reader. In a world where cosmic dangers eclipse human potential, what can super strength offer in the way of protection? When a weeping supernova wipes away a galaxy, what justice can be wrought using the power of invisibility?  I’m not sure.

Equally, the heroes of BLACK HAMMER seem unsure of their places in a new and changed landscape. The struggle of finding their purpose (or learning they have none) after the cataclysm in Spiral City looks to be an epic journey, and I can’t wait to know more. As a reader of BLACK HAMMER, I know you will experience a comic that is thoughtful, artistically beautiful, and ultimately worth every minute you put into reading it.

You can’t want more than that.