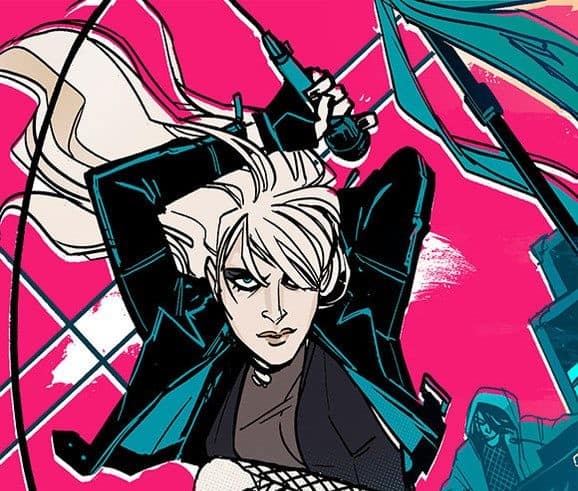 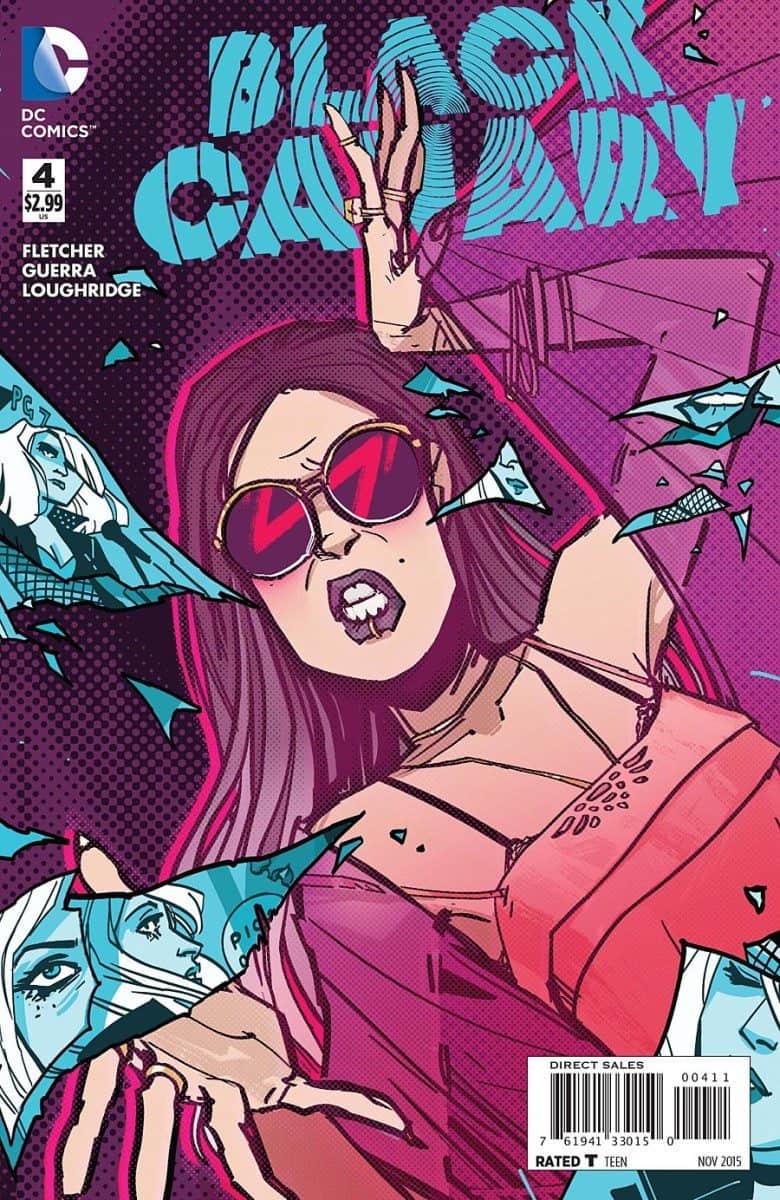 BLACK CANARY #3 ended with Ditto having been abducted by the band’s former lead singer, Bo Maeve, and this issue begins with the two of them headed off to an unknown destination. Meanwhile, the band locate one of Maeve’s scarves near their bus, and deduce that she’s taken Ditto. Enraged, Dinah takes off on a motorcycle to hunt them down. 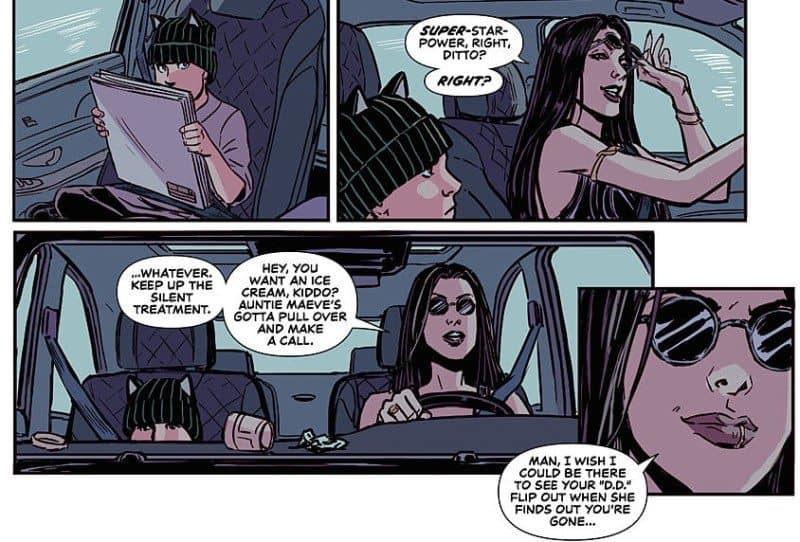 Back with Maeve and Ditto, hostage and kidnapper seem to be bonding a bit, at least from said kidnapper’s point of view. Bo dancing with Ditto, and revealing the story of her life. From a young age she’d been addicted to music videos and the idea of being a successful entertainer. Her parents are initially supportive but by her teen years cut her off. Undeterred, she pursues her dream eventually forming the first version of the band that would become Black Canary. However, her diva-like behavior gets her kicked out of the band and vowing revenge, especially when she inadvertently learns Dinah’s secret. 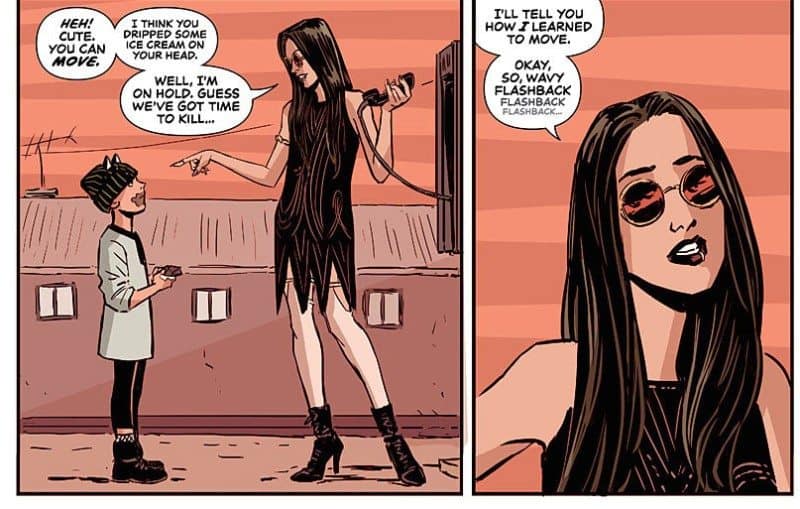 Maeve’s vow for vengeance brings us back to the present, as she delivers Ditto to Amanda Waller. In return for her, Waller sends Maeve off with a team of her men with the promise that she’ll be rewarded with her deepest desire. However, Waller’s attempt to take Ditto into custody is broken up by a mysterious female ninja clad all in white. The ninja is able to abscond with Ditto, and drop her off at the motel she and Maeve had previously been at. Ditto is found there by Dinah, who had located the motel thanks to help from Batgirl’s ally Frankie. The issue ends with Maeve being operated on to equip her with her own Canary-Cry.

Catch up with our Black Canary #3 review.

BLACK CANARY #4 takes a bit of a detour from the normal plot of the series, and instead focuses a vast majority of it’s pages on the backstory of Bo Maeve. It’s a risky move by Fletcher to focus an entire issue (especially one this early on in the series) on a new character while for the most part ignoring the existing cast, but he pulls it off perfectly. Maeve’s story effectively fleshes out the character and her motivations, and makes the end reveal of her being experimented upon very foreboding. The potential of Maeve as a villain, and the later introduction of (presumably) the New 52 version of White Canary, provide two very big hooks for future issues. 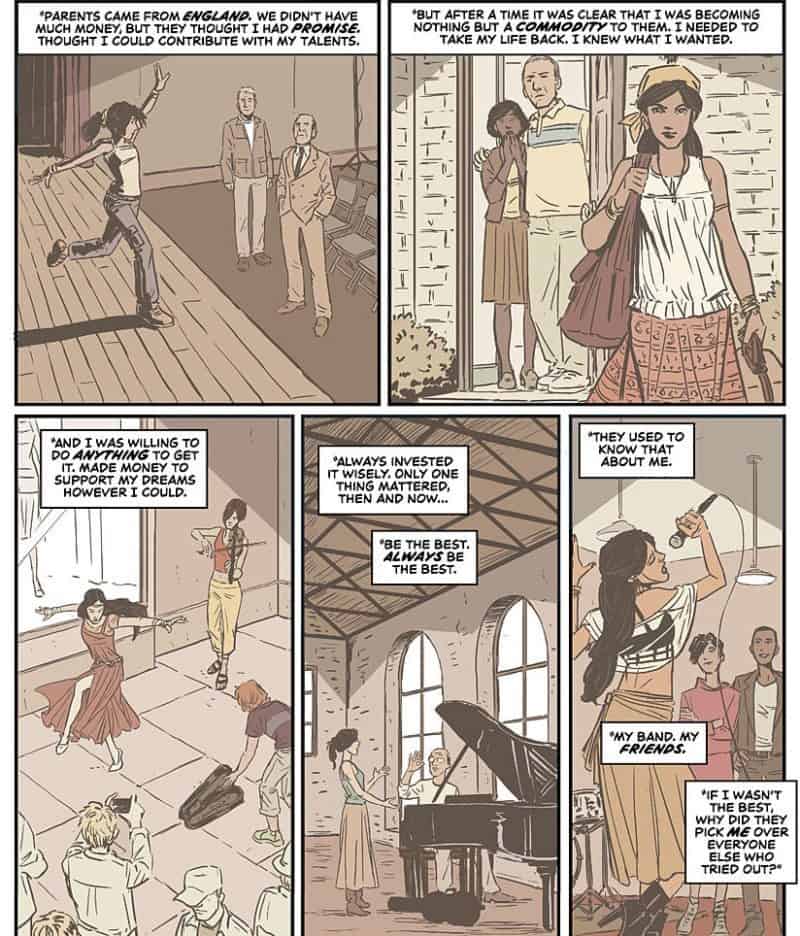 From a characterization standpoint BLACK CANARY #4 is almost single-handedly carried by Bo Maeve, and as said above Brenden Fletcher pulls it off perfectly. Her backstory reminded me of some the classic villain exposition episodes of BATMAN: THE ANIMATED SERIES. She’s not set up as evil at all, but rather as a shade of grey. The issues with her parents, and her overall desire to follow her dreams are very relatable and make her descent into full-on villainy sad, as opposed to just a story contrivance that exists solely to create a villain for Dinah.

Regular penciller Annie Wu is off for this issue, and while the book does have a different feel without her pencils, fill-in artist Pia Guerra does a wonderful job. Aided by regular series colorist Lee Loughridge, Guerra is able to channel the normal feel and ambiance of the series while not aping it’s usual style. The double page spread of Dinah riding her motorcycle early on is gorgeous and probably gets my pick for the top page of the issue. Honorable also goes out to the pages where Bo and Ditto dance together, which truly humanizes both of them. 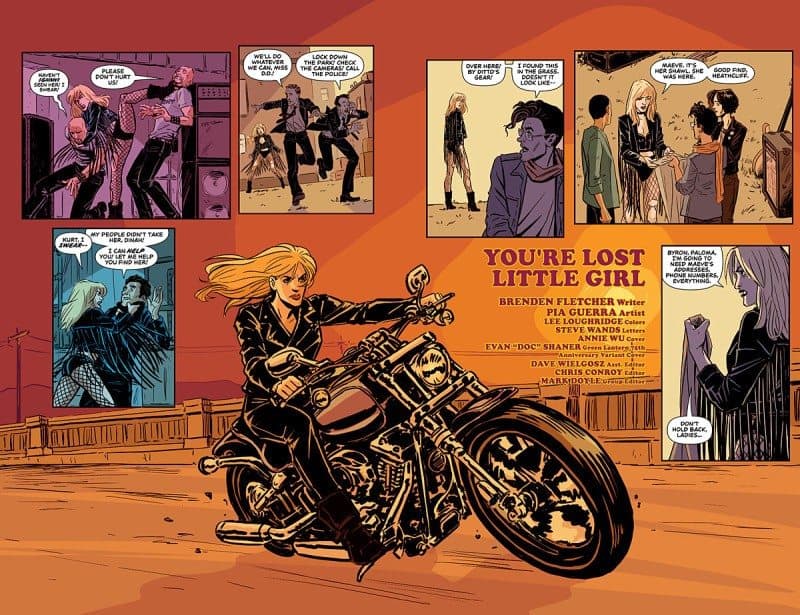 BLACK CANARY #4 seems like a skippable issue on paper. It’s the backstory of a character who sounds minor, with a fill-in artist to boot. The issue completely defies those expectations, presenting a compelling origin that makes said formerly minor character seem incredibly important and lays the groundwork for numerous potential storylines going forward.

Check out more from BRIAN here!