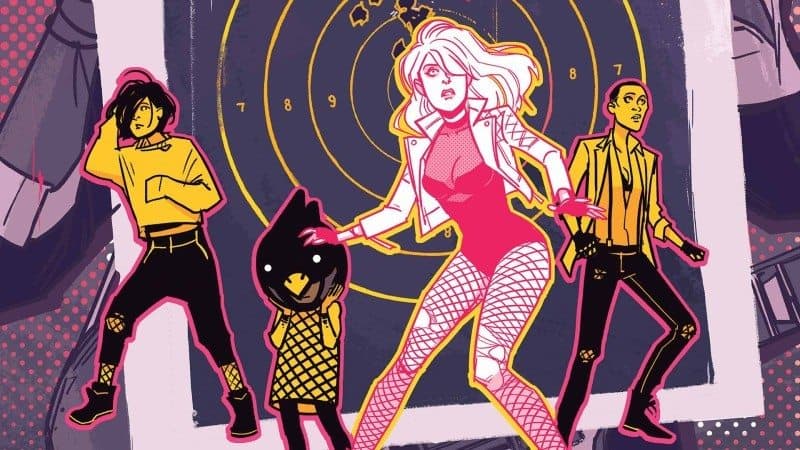 Dinah attempts to balance training the band for combat from their mysterious enemies, an embittered ex-lead singer, and a shocking revelation about her past all while performing nightly in BLACK CANARY #2. 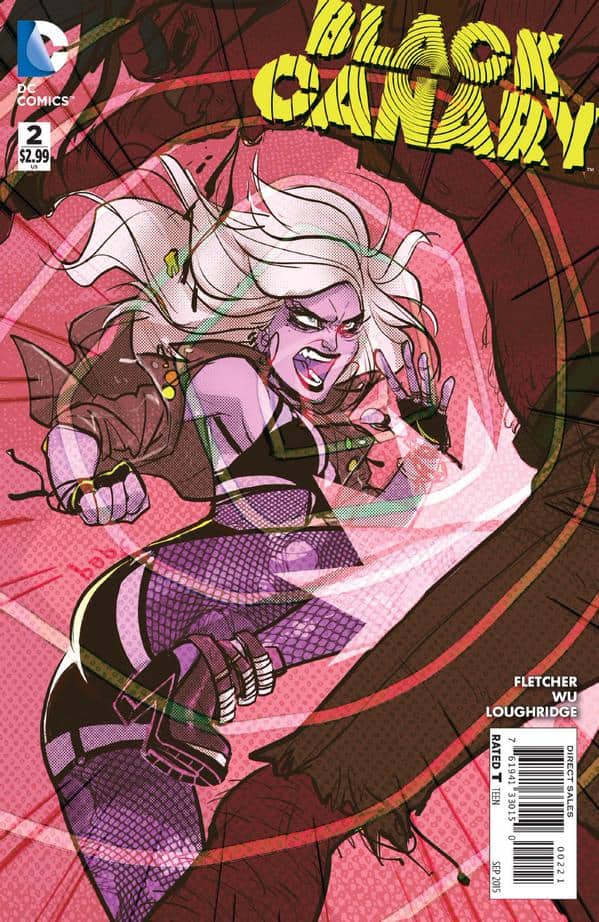 BLACK CANARY #2 picks up with Dinah Lance training her bandmates Paloma, Ditto, Lord Byron and their road manager Heathcliff in various forms of self-defense including marksmanship and hand to hand combat. Things aren’t going well however, as the personality clashes between Paloma and Dinah continue to worsen. Meanwhile the rest of the band grows increasingly paranoid that the shadow creatures that came after their mysterious guitarist Ditto last issue are still following them. An unwelcome visit from the band’s previous lead singer, whom we learn was unceremoniously dumped and replaced by Dinah only adds to the glum situation.

Dinah attempts to lighten things up by taking the band on shopping trip. She ends up alone with Ditto and seemingly begins to learn a bit about the petite guitarist’s sound manipulation powers. However before she can full answers the two are attacked. Dinah is able to defeat the assailant, but the connection she has to him ends the issue on a shocking note. 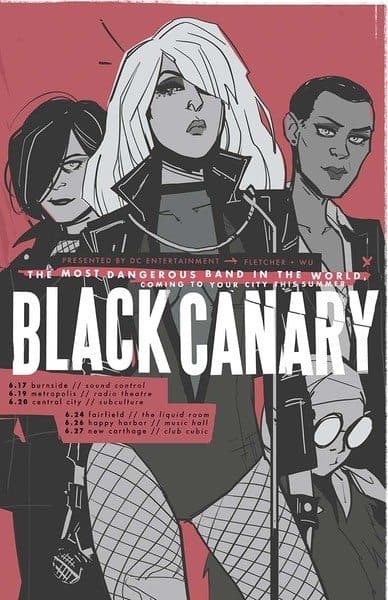 Brenden Fletcher’s slow-burn approach to BLACK CANARY continues in this second issue. There’s no progression to the main “superheroic” plotline of the book until the big reveal on the last page, and even that major moment seemingly has more of a bearing on Dinah’s personal life than it does on Black Canary. We also learn nothing more about Ditto’s true origins, what her powers are, and why the mysterious beings seen in the first issue are after her. This isn’t really a bad thing though. Very little about BLACK CANARY reads like a typical DC Comics super-hero book, and the normal pace of plotting in that type of book wouldn’t fit here. Instead the book reads more like an independent comic. 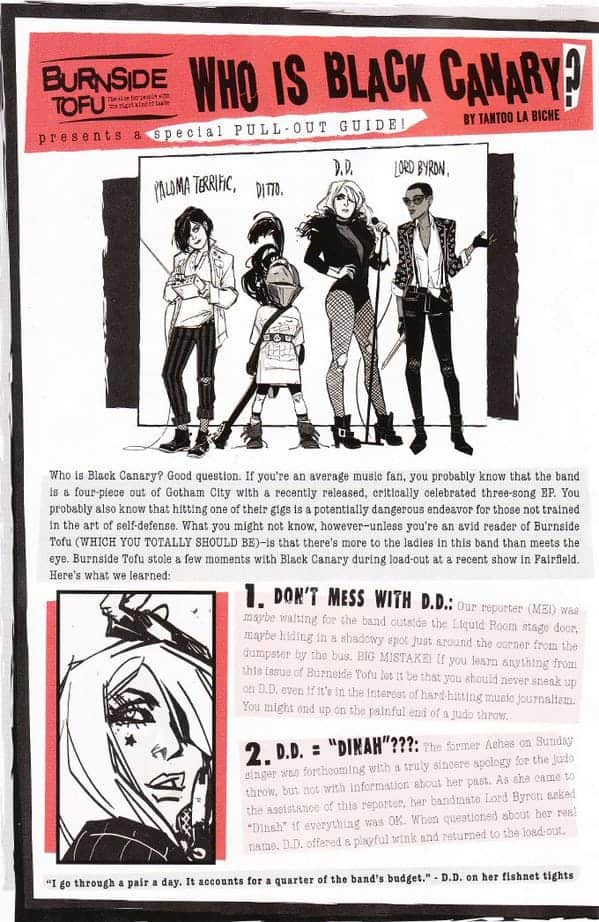 Character-wise, the best pieces of characterization in the issue aren’t actually part of the book’s narrative. Picking up on the same punk fanzine aesthetic that the first issue did, there’s a two page spread in the middle of the book designed to look like a removable poster. One side features a Black Canary tour ad, and the other features magazine styled biographies of the four band members. This is a rather inspired way of delivering the backstory of the band and exposition on the characters, the majority of whom were created solely for this title.

Once again, I can’t say enough how much I love Annie Wu’s art on this book. Her zine and gig poster inspired angular figures and panel composition really elevate the book, and is up there with Babs Tarr’s work on BATGIRL as some of the most interesting and different art coming out of DC Comics right now. Also deserving of praise os colorist Lee Loughridge. His color-palette matches perfectly with Wu’s concert poster aesthetic. The standout page to me this issue is actually the first one. The image of Dinah pointing a gun directly at the readers with the rest of the other characters huddled behind her is striking. Combined with the color scheme, it really lets any potential first time reader know that this is a very different Black Canary than any they’ve read in the past. 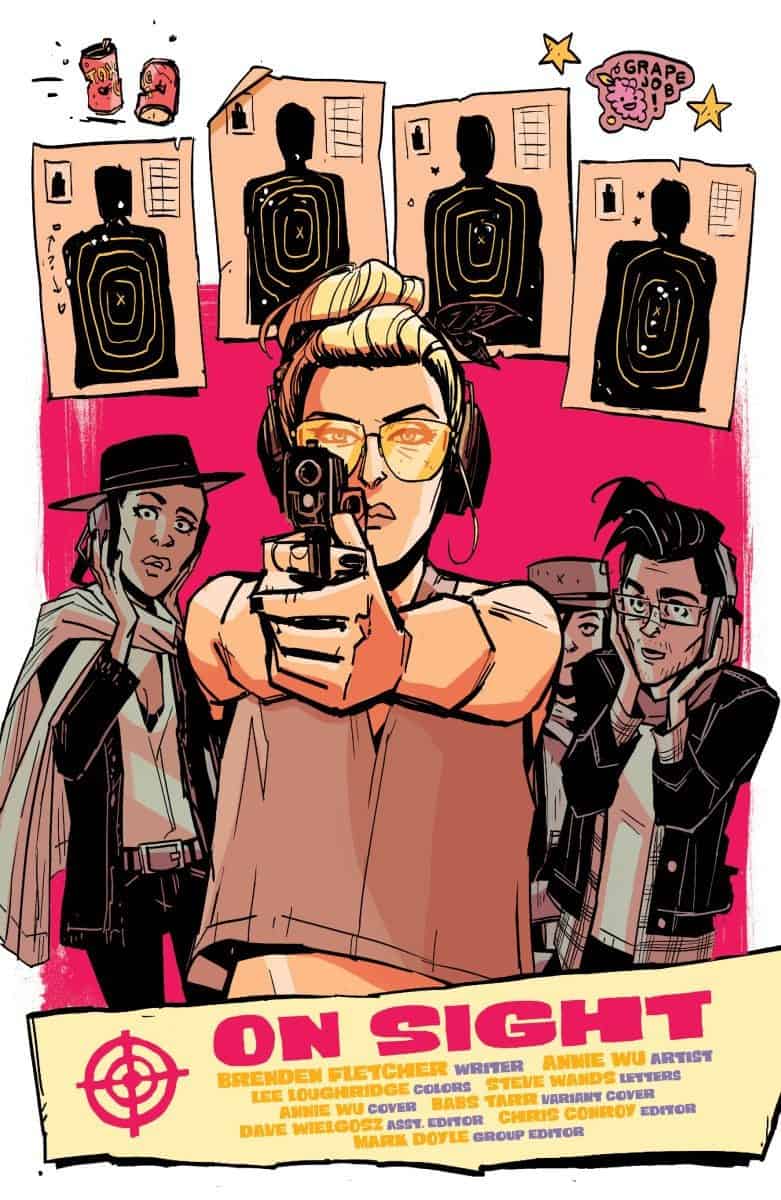 BLACK CANARY #2 continues the punk rock reinvention of Dinah Lance that Brenden Fletcher and Annie Wu began in Issue One. While it’s a bit light on plot development, the character pieces, musical aesthetic, and stunning art make it an absolute must-buy for anyone looking for something different from the normal DC fair.