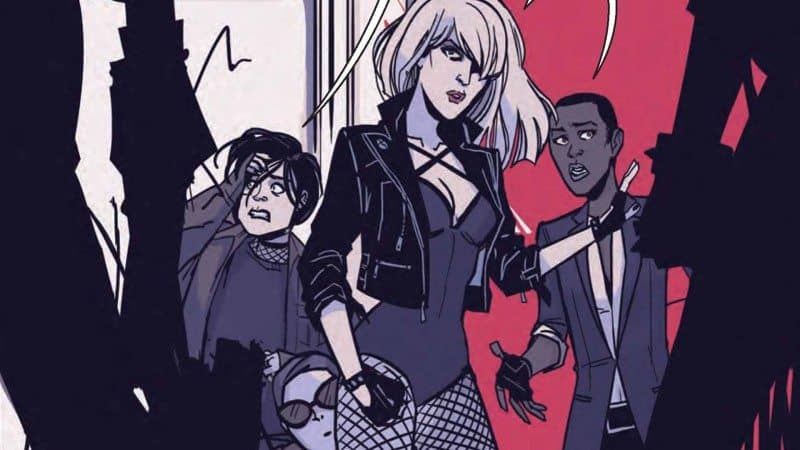 DC adds another book to the small “Fletcher-Verse” corner of their main universe with the debut of Black Canary #1! Spinning out of the pages of Batgirl, Dinah Lance has temporarily moved on from super-heroics to front a band. However her old and new lives are about to collide… 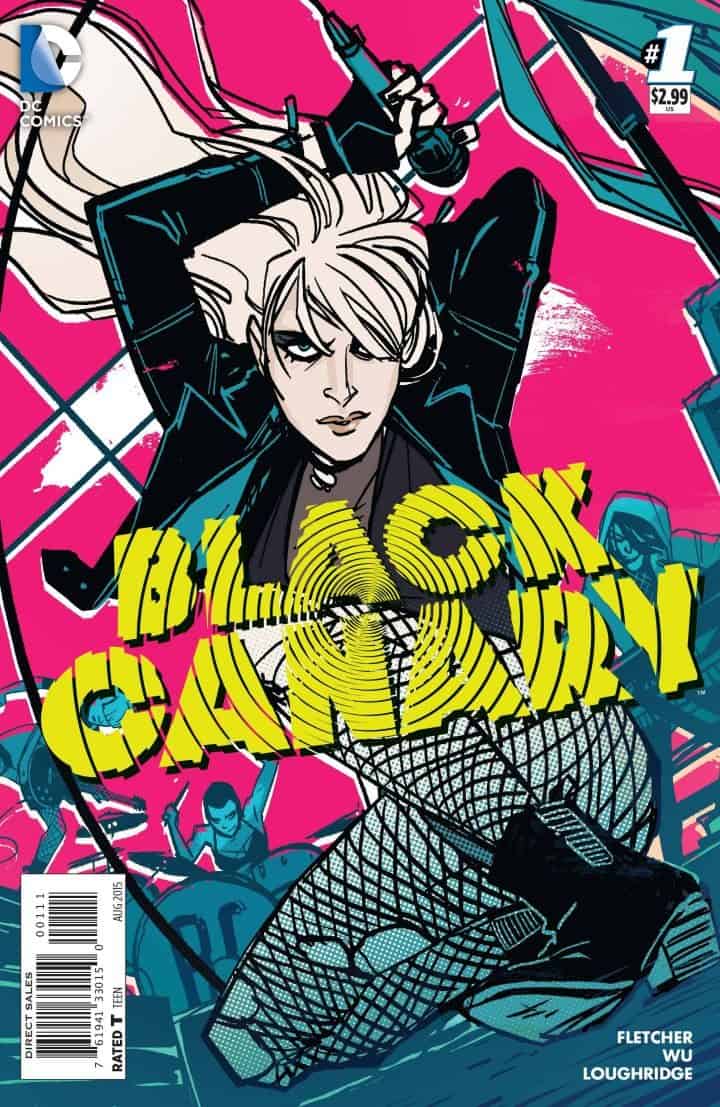 The first page of Black Canary #1 is dressed to look like a 1980’s punk rock fanzine, right down to the credits for Tantoo La Biche. The zine article, which is inter-spliced with panels of Dinah on-stage performing, describe how the band Black Canary have been plagued by violence during their tour, especially their lead singer DD (Dinah’s stage name). The article goes on to question whether DD’S antics will cost the band their career.

Shifting out of the zine, we next see the band’s manger and merch guy Heathcliff arguing with a promoter over whether the band will be paid. The promoter is furious that Dinah got into a fight with three men and trashed the club. Heathcliff retorts that the men were harassing female members of the audience, and that had Dinah not been there the club could be facing several lawsuits. The promoter is still reluctant to give up the cash, until Dinah walks up behind Heathcliff. Her very presence scares him into turning over the cash, and the band departs. 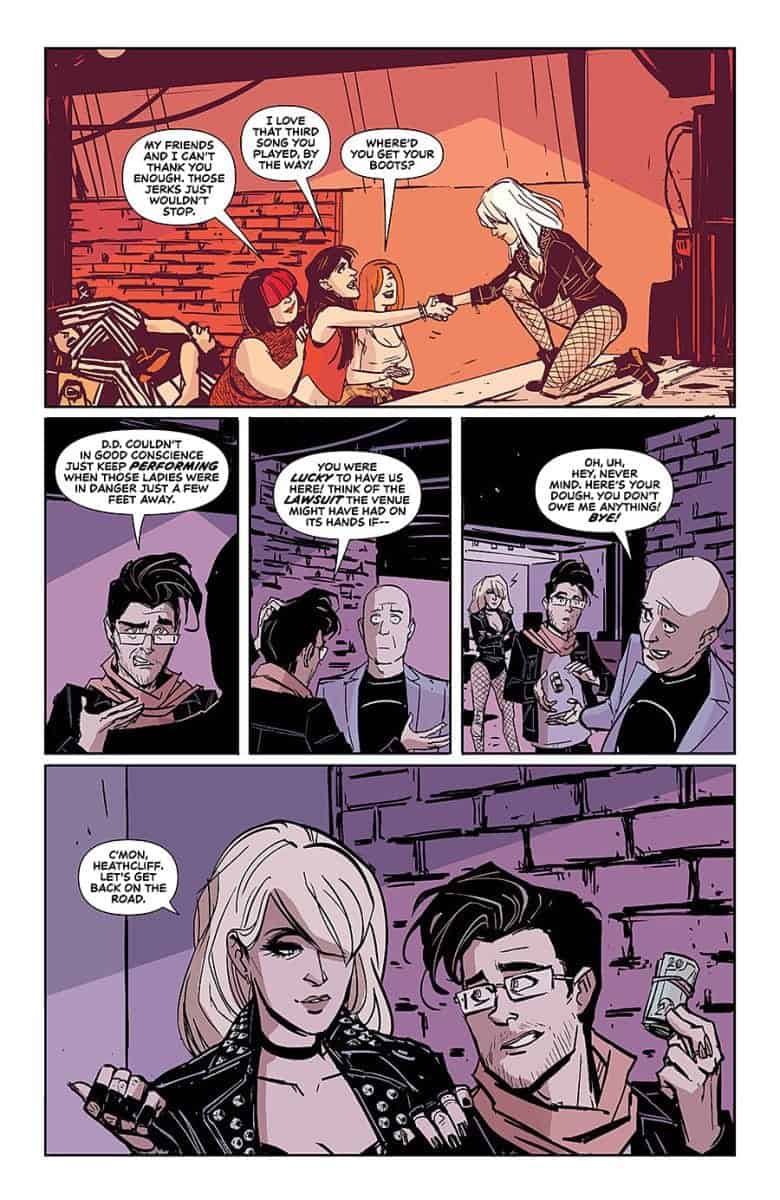 Later that night on the bus we’re introduced to the rest of the band members, keyboardist Paloma Terrific, seemingly mute guitarist Ditto, and drummer Lord Byron whose having a conversation with Dinah. The two discuss how Dinah’s actions are affecting the band, and she vows to try harder to keep her anger in check starting with the next show. However when they arrive at the venue, there are a strange trio wearing suits watching them from afar, discussing how their target has arrived.

The band soundchecks at the venue, and they marvel at Ditto’s almost other-worldly guitar skills. They comment that she’s able to do with her fingers what most people require electronic devices like talk boxes and effects pedals to achieve. Later that night, as Dinah prepares to go on stage she runs into Heathcliff restocking shirts. The two converse, with Heathcliff asking if Dinah enjoys being in the band, and she responds that she’s doing it to finish out her contract and get paid so she can rebuild her life, most of which was destroyed in a fire over in the Batgirl series.

The show begins strongly, and the first five songs of the band’s set go over very well. All hell breaks loose however when the suited trio arrive in the crowd, and begin mutating into slime-like beings. Dinah urges the audience to leave, and begins fighting them. Initially she attempts to fight them off hand to hand but it’s ineffective. She apologizes to her band mates, and uses her Canary cry to bring the roof of the club down on top of the slime-beings. Before they escape, they reference Ditto and say that “he is coming for her” and “they will all die.” Dinah tell the band that she will take Ditto and protect her and that the rest of them should go home. Lord Byron interjects that Dinah clearly has experience dealing with these type of things, and that Ditto may open up about what’s happening if the band keeps playing, so the band isn’t leaving her side. Dinah agrees, but tells the band and Heathcliff that she’s going to start training them in hand to hand combat the next morning. Paloma seems dejected at this, but seems to go along with Byron. The issue ends with a shot of the band’s bus being trailed by two of the slime-creatures, foreshadowing future events.

Black Canary is the first of the Fletcher-Verse titles that Brenden Fletcher is writing on his own (compared to Gotham Academy, co-written with Becky Cloonan, and Batgirl, co-written with Cameron Stewart) and it shines through in the heavy use of musical motifs throughout the book completely overshadowing any traditional “super hero” aspect – he has a background in music. Plot-wise, the issue holds together well with the central conflict of Dinah’s violent nature and it’s affect of the band. However a tad more explanation of what the slime-creatures are and why they want Ditto would have been nice. While I understand it’s a first issue and the creative team doesn’t want to give too much away, a little tidbit of information could have helped. Character-wise, the book is strong. Dinah is written in-line with her Batgirl characterization as someone whose trying to find her place in the world and rebuild her life after it’s been destroyed. Of the other characters, it’s Lord Byron and Heathcliff who get  that get the most screen-time. Heathcliff’s placement in the book is especially interesting, given that he’s a Gotham Academy character. How he came to join the road crew for Black Canary is left unexplained as of now, but provides an interesting plot-hook for the future. The rest of the band is a bit underdeveloped. Paloma is clearly antagonistic towards Dinah, but nor much else is known about her personality. 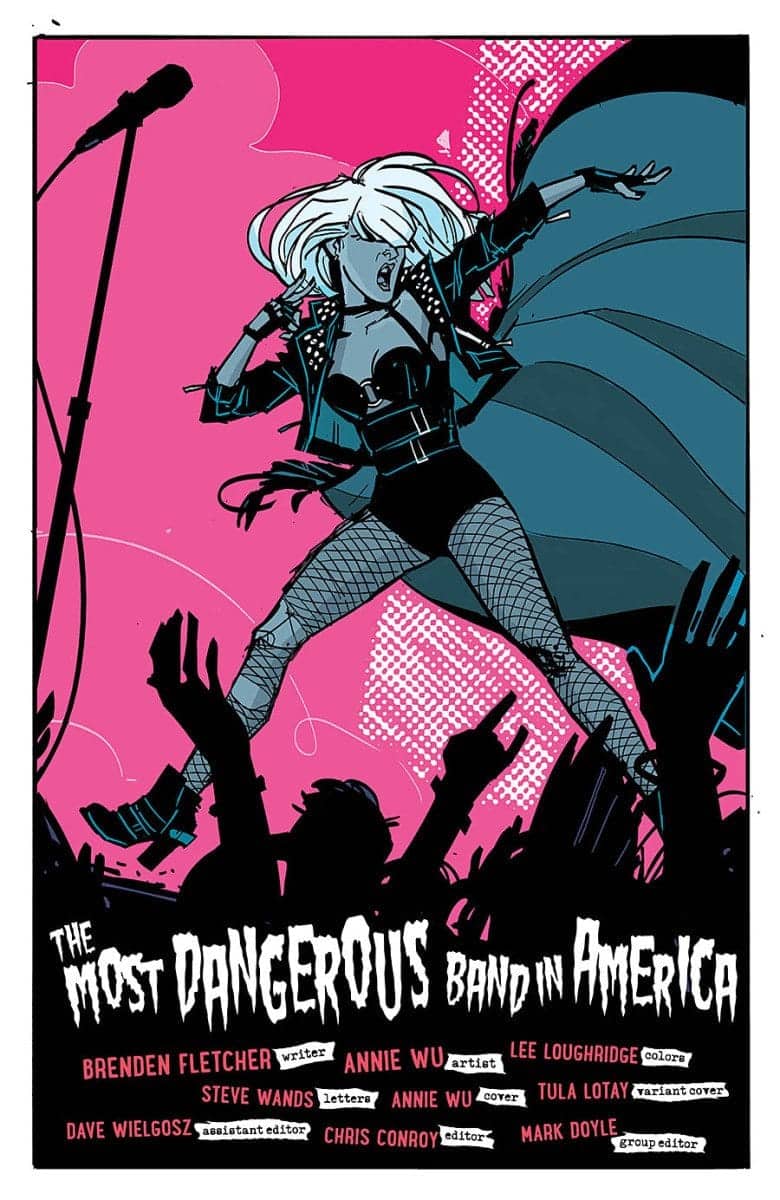 Annie Wu’s art for the book complements the tone perfectly. Clearly inspired by DIY music zine culture, her art has a rough look to it that, for lack of a better term, brings a real rock and roll quality to the book. She’s also said in various interviews that she took inspiration from concert posters for acts like David Bowie, and it really shows in the band performance scenes, especially Dinah’s stage wardrobe and cape.

Black Canary #1 is a very intriguing start to a new series. Its musical setting and lack of almost any super hero tropes immediately differentiate it from almost anything else at the mainstream comic companies.