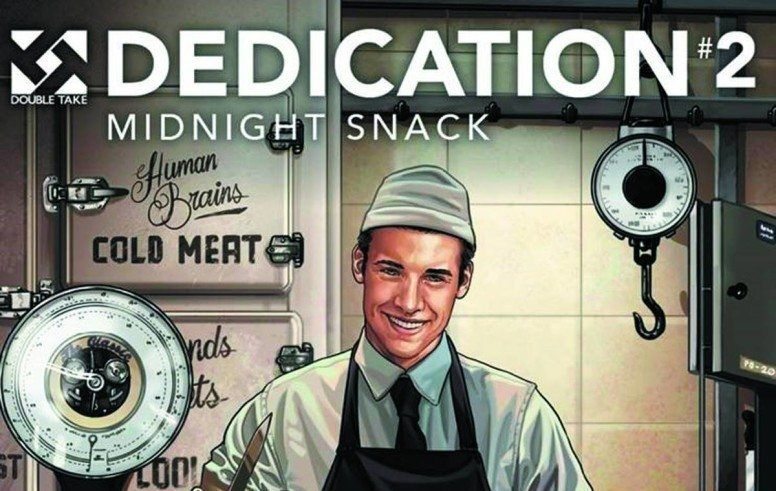 Double Take, the astounding new publisher that’s taking the comics market by storm, has recently released their second issues of all ten of their incredible books- all connected by one shared universe.  The zombie saga takes place in the same world as Night of the Living Dead, so Romero fans rejoice.

READ: Missed issue #1?  Check out our review of DEDICATION #1 here!

ComicsVerse recently had the opportunity to speak with Matt Summo, one of the writers for DEDICATION, a book that takes place in a bit of a different location than you might expect for a zombie story: a grocery store.  The book follows Trip as he and his fellow grocery store employees deal with the first wave of zombies. 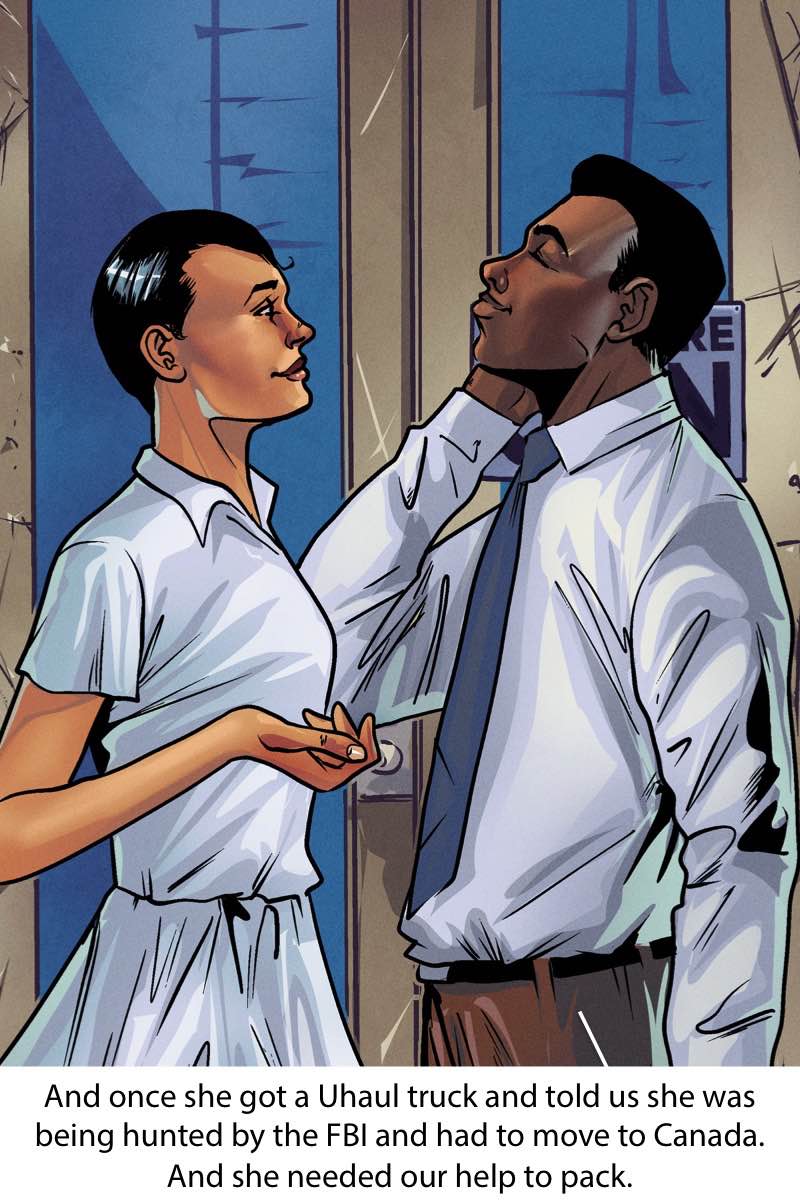 ComicsVerse: What is your inspiration for Trip’s stories about his grandmother?

Matt Summo: Those stories were actually written by the extremely talented Mike Soviero, so while I can’t speak to the inspiration behind them, I can definitely explain the reasoning. Each issue of each of the 10 books has a story written in the style of the oral stories presented in the Moth Radio Hour. We use those stories to give the reader something entertaining to read while being entertained by the visuals.

CV: The zombies in this book don’t seem to be too similar to the typical zombies- why is this?

MS: Without giving too much away, there is a reason as to why they’re not your typical zombies and this will be explored in further books!

CV: It seems like some of the differences almost lend to a commentary on societal stereotypes- we assume based on prejudices from the media that zombies are supposed to behave a certain way. If it won’t spoil anything, can you elaborate on why some of the people in the universe treat the zombies differently? We see a few characters who are sympathetic, almost, to the zombies, and a few who find ways to work with or around them.

MS: I think it’s due to the way that the zombies behave that indicates how the characters respond to them. Notice, for example, in issue #1 Trip isn’t aware of what they are and acts as if they’re a group of people that may be drunk or stoned. No need to react violently to them if they’re not reacting violently to you, right? That’s basically the mindset we had with DEDICATION and our zombies. 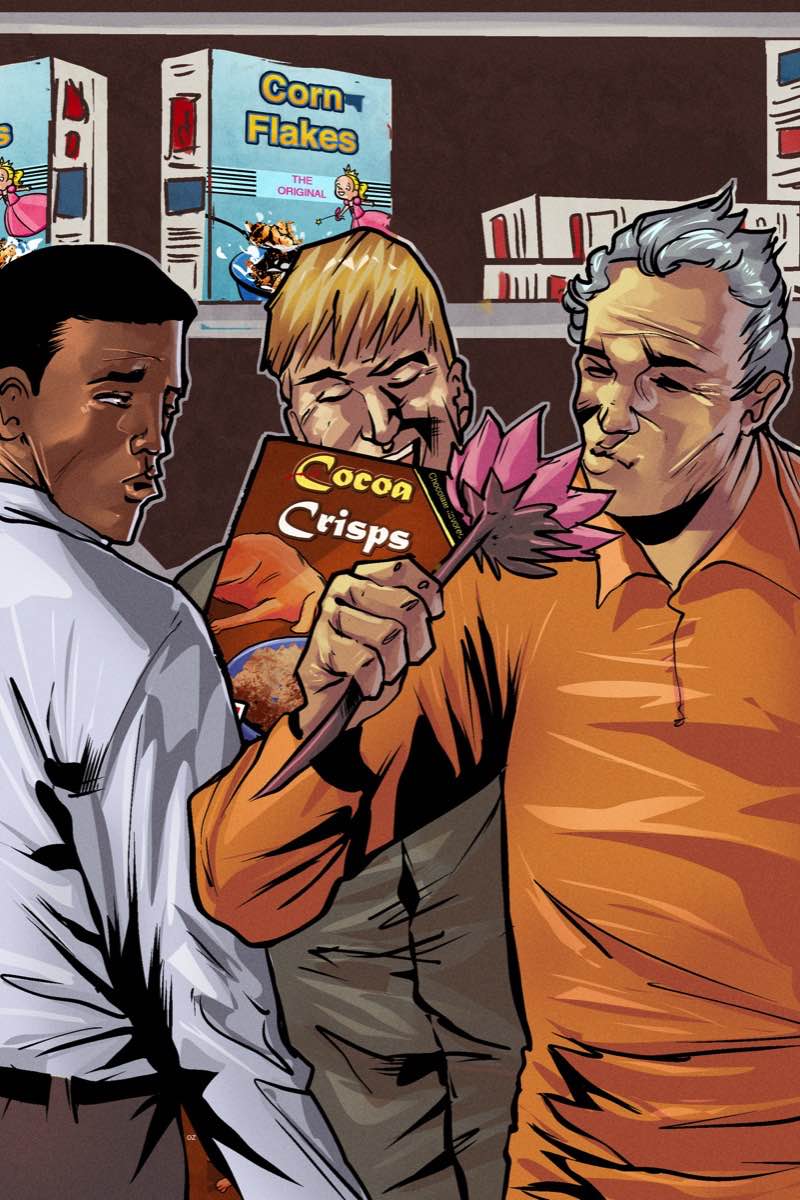 CV: Very cool.  Speaking of your mindset for this comic, can you walk us through the creative process within Double Take? How do you keep a universe so tightly knit?

MS: For me, the creative process is very collaborative. At the start of writing process for each issue, I usually conference call in to the office with Bill, Young (penciller), Michael and Caroline (editorial) and we lay out the groundwork for the issue and what we need to accomplish within. After the call, I write out a series of chronological sequences for the main characters. Young will illustrate the sequences in panel form and they’ll be inked and colored and sent back to me. I’ll then fill in dialogue for each of the characters and indicate where I think the oral story should go. (whether I write the oral story or they pick one from the bank of stories they’ve licensed is strictly up to editorial)

As far as the cohesiveness of the universe, this can be attributed to the amazing editorial team. They’ve created bibles for each book along with the map (which you can see in each issue) and a timeline of events. Double Take has a small team altogether, but they do the job of a team more than twice their size. They are truly impressive, hard-working and all-around a great group of people. I’m honored to be a part of this team.

CV: There seems to be a lot of sexuality in the stories in the Double Take universe- is this a reference to the sexual stigma in horror movies like Night of the Living Dead?

MS: It’s a reference to that stigma and to life itself. One of the things we pride ourselves on is that the books are as real as they can be. For example, my book takes place in a grocery store because I used to work in a grocery store. I brought a lot of my experiences in retail to the book which helped me to create characters based on actual people and “shop talk” that lends itself to the authenticity of the setting.

CV: How well do you think you and your coworkers would have handled this situation? As well as in the book?

MS: I love this question. I like to think that we would handle it similarly. Especially if they presented themselves the same way they do in the book. Trip and I are similar in the fact that we take pride in our work and are (for the lack of a better word) dedicated to what we do.

However, this question makes me think that the millennial version of DEDICATION would probably be the kids in the store not being proactive about getting the zombies to leave and just taking pictures of them and sharing them on social media. 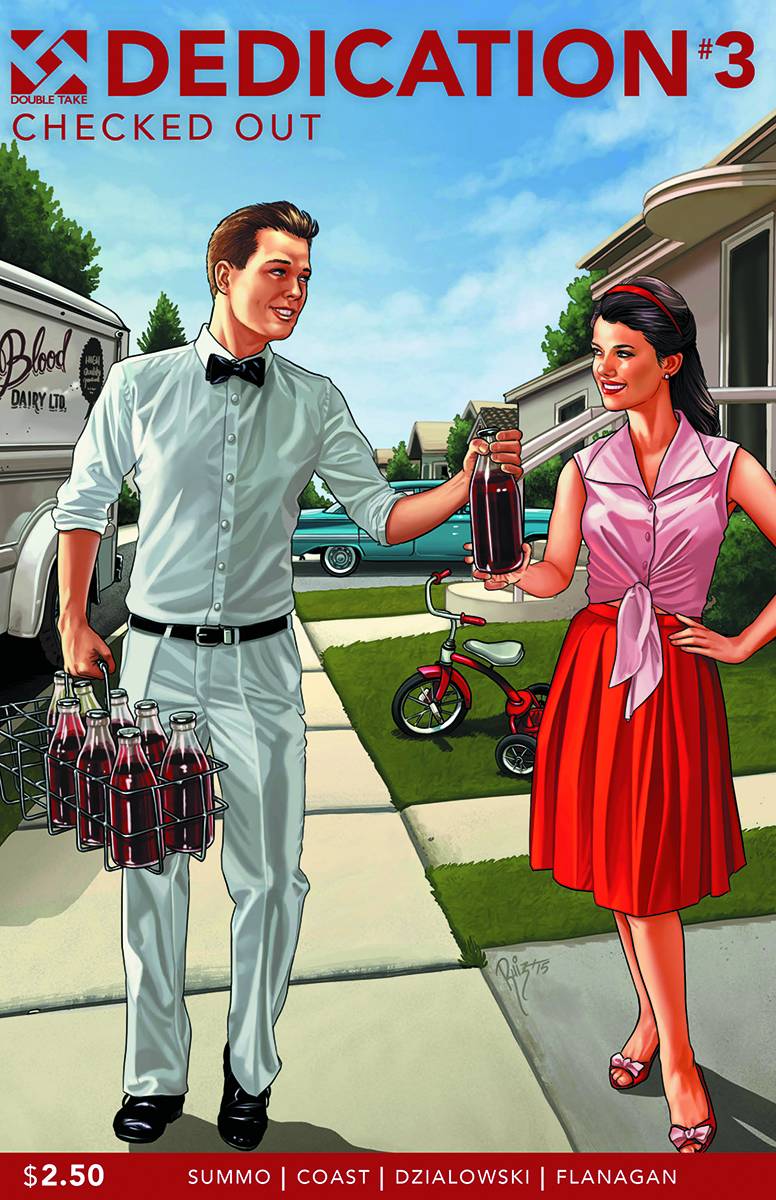 CV: What can we look forward to in the upcoming issues of DEDICATION?

MS: Issue 2 (In stores now!) ends on a pretty interesting cliffhanger. Issue 3 is what we’re referring to as the “eye of the storm”. Status quo somewhat returns, but if you’ve ever been to a grocery store during a crisis situation, you’ll know that it’s pretty chaotic. While my book can stand on its own, I definitely recommend reading all ten as the characters do crossover and they all take place in Evans County, PA. For me, I enjoy seeing characters that I created pop up in other books. There’s a few other easter eggs in all of the books that I won’t give away here, but definitely keep your eyes peeled!

CV: Can you give us any hints without giving anything away as to where to be looking for an easter egg?

MS: Look in every single panel. More specifically, in issue 2, look in the background of the two-page spread shot.

CV: What’s your favorite zombie movie and why?

MS: Tough question. If I had to pick just one, I’d go with Edgar Wright’s Shaun of the Dead. From the script to the cinematography, it’s an amazing film. Edgar Wright is an incredible director. True story: The original script for DEDICATION had some references to Shaun of the Dead in it, but they were edited out for pacing purposes.

For those of you who haven’t read it yet, you can pick up issue #2 of DEDICATION now!  Get ’em quick, before they fly off the shelves- Double Take has announced that they won’t be reprinting, which makes these first few issues a real hot commodity!

And, hey, we got you a freebie for your personal easter egg hunt!  Now go get these issues and join the search!  We’re going to have to dive right back into Double Take’s #2 issues to see what else we can find!