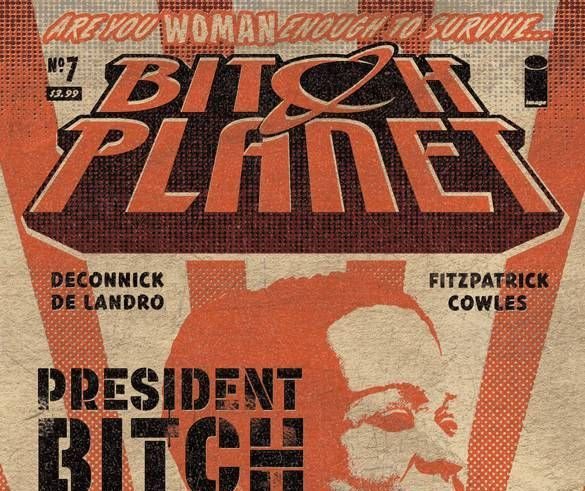 Commonly in comic book and graphic novel reviews, the book is picked apart by the components that make it up. First, a reviewer will focus on the plot and dialogue and review the pacing before moving onto the illustrative elements such as art styling, line drawing, color scheme, etc. and if I were to review this week’s BITCH PLANET #7 from Image Comics in the same fashion, it wouldn’t do the book justice. 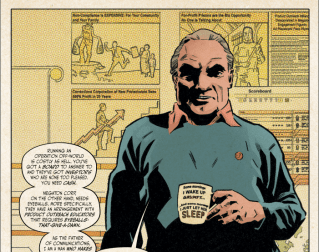 The thing with BITCH PLANET is that, unlike some other books, you cannot separate the various components of it and review them separately. The book just wouldn’t hold up. I’m not criticizing the book for that, though, because this book is truly an effort of artistic collaboration that doesn’t hold the same weight if you pick it apart. Kelly Sue DeConnick, Valentine De Landro, and the rest of the team balance the various elements of the book against each other, understanding that where one topic is best expressed in dialogue, another is better conveyed in the illustrations.

READ: Not caught up on BITCH PLANET? Read our review of Issue #6!

For example, BITCH PLANET #7 follows the aftermath of the climactic last couple of issues, which resulted in an important character’s death. A majority of this issue is laying the framework for where BITCH PLANET will be going forward, but it doesn’t do so without properly and poignantly providing closure to some of the storylines from the last arc. In the central scene of this issue, we see Kam walk into the showers to comfort a guilt-ridden Penny. In this instance, the dialogue comes second to the panels’ artwork, but that’s because what is being said is something better left to the images, the dialogue just needs to be present enough to tie each panel together. Rather than be told that a black woman can be simultaneously powerful and vulnerable (and sometimes more powerful because of it), we are more effectively shown this through De Landro’s art. The emptiness of the room, the nakedness of the women, the nuances of the female characters’ psyches playing off of one another could not be effectively expressed in words, so DeConnick deftly lets the art do it. 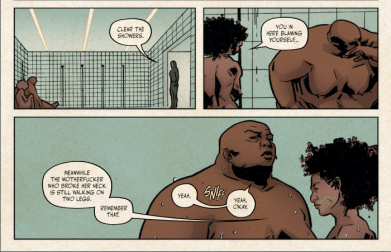 This isn’t laziness on the part of a sub-par writer, but awareness of intent by a collaborator and artist with enough respect and mastery of her craft to understand the limitations of her medium, and this is the case for the whole team throughout the issue and, really, all of BITCH PLANET.

Maybe BITCH PLANET #7 isn’t packed to the gills with explicit action and political furor, but where it succeeds is in articulating where these characters are at now and how the events up until now have shaped them. It doesn’t hit as hard as other issues, but like any great story, not every chapter should. This issue is filled with enough misogyny and mystery to make you want to pick up the next issue to find out what comes next, and that’s just A-OK. After all, these ladies don’t owe you a damn thing.

LISTEN: Want to hear the voices behind ComicsVerse talk about comics? Check out one of our podcasts!