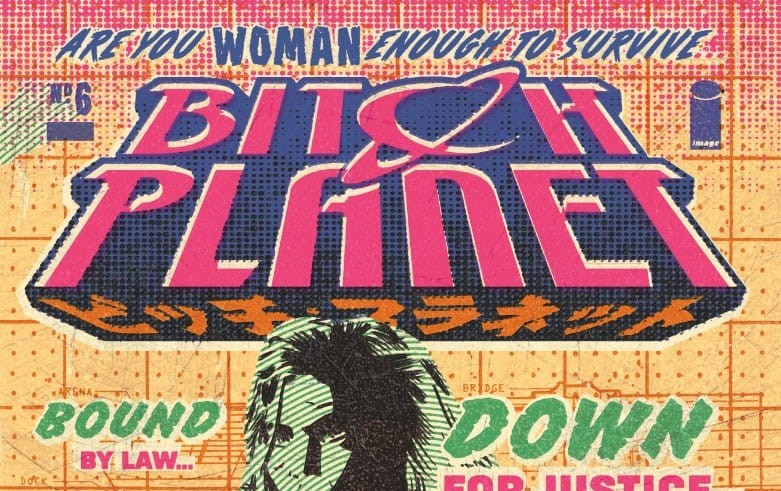 BITCH PLANET is finally back in BITCH PLANET #6, but before we can begin a new story arc, we have to give a little bit more love to our favorite inmate, Meiko, as we delve into her backstory. If you’re ready to kick some butt and take some names, then I am as well. So let’s begin with a violin.

A violin teacher, lesson, and a violin itself are put on display here before the back story is revealed to us. Apparently, Meiko’s father is some form of engineer while Meiko’s mother is a violin teacher. Or at least, she pretends to be a violin teacher while she teaches the girls of Meiko’s school Calculus. This fact is not a secret to anyone in the Maki family, however, considering that her father is not only in on the scheme but also that he gets input from some of the women in his family on his engineering projects.  However, that is all put into jeopardy when Meiko’s parents’ plan to build a deliberate mistake into Bitch Planet is caught by one of Mr. Mako’s superiors. 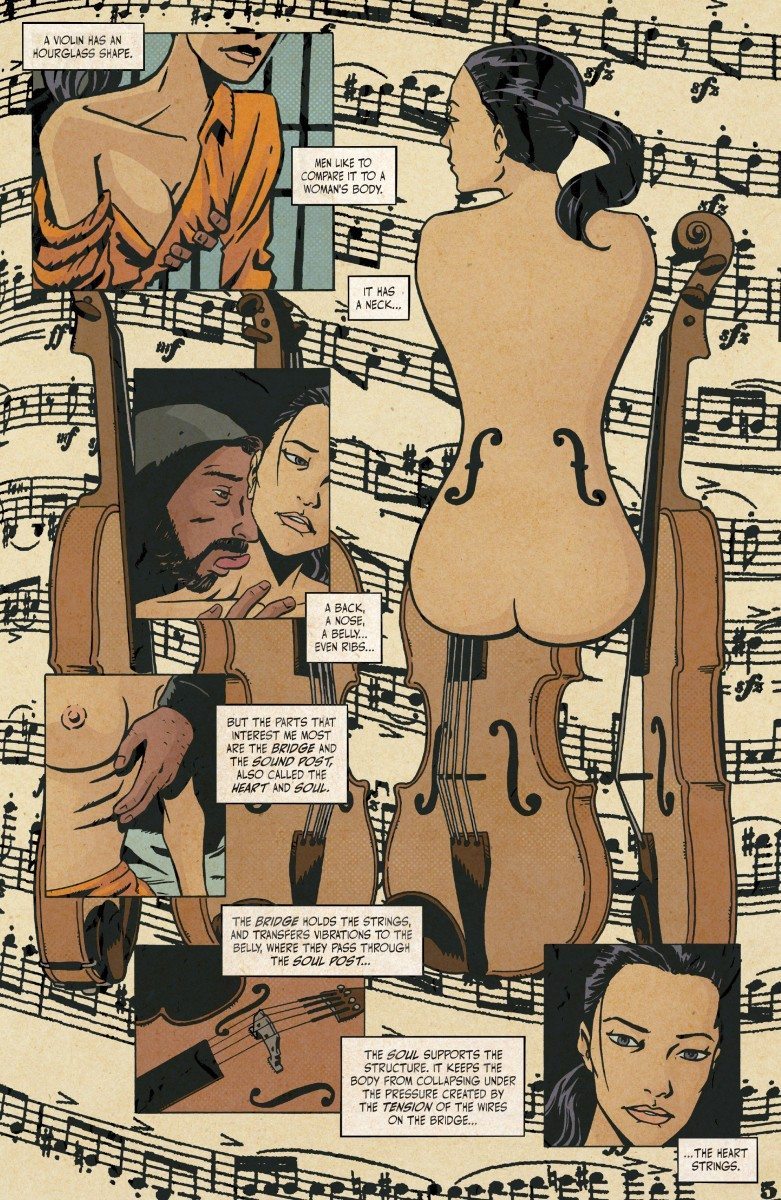 It’s gotten to the point that when a new issue of BITCH PLANET comes out, I am never worried about the quality of work. I always know that it is going to be a 100 percent worthy of my time, so if you’re here to find out about whether this issue is worth reading, then just read it. What I am more interested in is what each issue chooses to tackle, and what it chooses to portray because with each story the world is just flushed out and given more nuance – which I believe any great serial satire should do. This issue gives us the backstory of Meiko Maki, an inmate that we all lost far too soon, and it is very different from Penny’s one shot. As opposed to showing a girl that was knocked down by those around her at school, Meiko is embraced with love in all aspects of her life. Her mother gives her the chance to embrace a more intellectually stimulating subject like Calculus, and her father encourages her to do the same as long as she wants that for herself, of course.

This is a nice touch to begin with because it demonstrates, once again, why the satire of this story is so intelligent. Much like the patriarchy we live in, there are women and men within that society that do not participate in the damaging aspects. There are those who seek to fight it, and Maki’s family is one of the best examples we have seen so far of people on earth who disagree with the Fathers. This issue also hit upon some of the subtle racism and cultural appropriation that occurs in our’s and BITCH PLANET’s society with Doug Braxton, who wears a Kimono over to the Maki’s home and drinks all of their sake. Of course, young Meiko questions this ridiculous and offensive behavior, but it is impolite to do so, which is why her parents have to send both of the girls to their rooms. 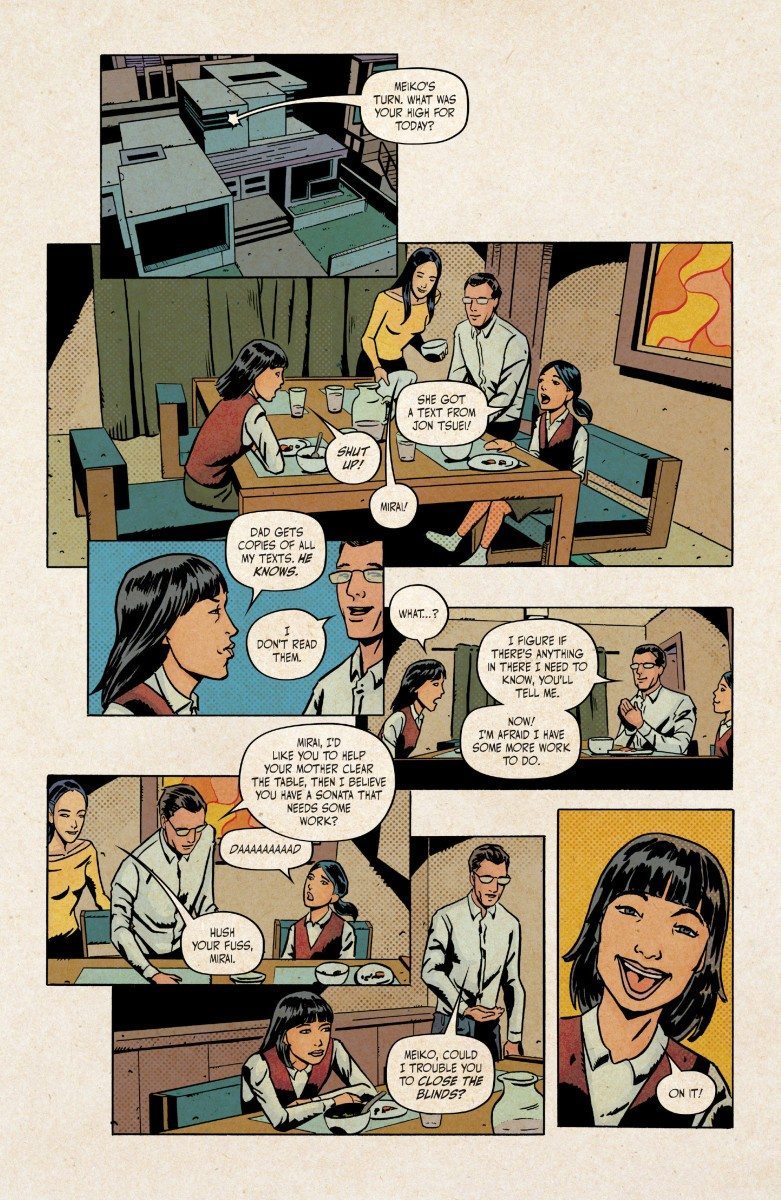 While all of the fleshing out and calling out of certain issues with our societies is always welcome, there is also the aspect of what this issue adds to the character of Meiko. What exactly does it tell us about her that we didn’t know before? Well, what we know is that Meiko is not the kind of person that is willing to play by someone else’s rules. She is also not the type of person that will allow her family to get thrown into jail, which is exactly why she got thrown into Bitch Planet. I think this is a great time to transition over to the art because much like Penny’s issue, this issue was not drawn by Valentine De Landro. The artist is the wildly talented Taki Soma, and she more than lives up to the challenge. As you can see from the panel I inserted above, she utilizes a lot of violin into this issue. The simultaneous simplicity and complexity of this object can also be seen in Soma’s art throughout the entire issue. The lines are clean in simple, but they contain complex emotions, conflicts, and characters. This approach also applies to the panel design, which is very simple and inventive at the same time. They are simple squares and rectangles, but the panels overlap in a way that creates a pleasing image to the eye even in their arrangement.

Overall, BITCH PLANET #6 is a thing of beauty, much like the five issues that came before it. It gives a nice send-off to Meiko while filling out the world with more nuance and detail, and I can’t wait for the next issue when the new plot and new arc officially begin!