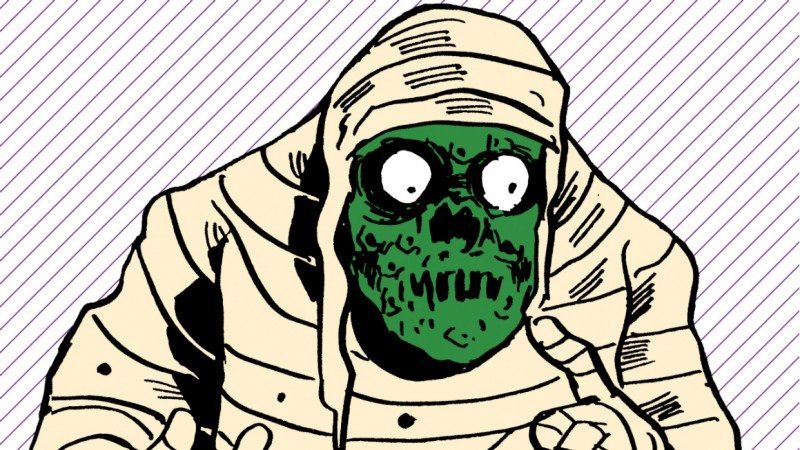 Based on its premise, I thought I would enjoy Shigeru Mizuki’s THE BIRTH OF KITARO. I mean, the book comprises the early adventures of a one-eyed yokai boy who fights other yokai with his “inhuman strength and whiplike hair”—what’s not to love? But instead of a fun adventure with a colorful cast of characters, the book delivers a laundry list of problems with art and characterization, so much so that Kitaro himself fails to be very interesting.

READ: Discover more indie books with our list of five indie graphic novels you should look out for in 2016!

In this respect, the problems begin almost immediately. When he appears in the first story of the book, “The Birth of Kitaro,” the title character is a three day old baby, and while it’s understandable that he can’t do much to fend for himself, the way Kitaro’s expressions are drawn make him seem unnecessarily pathetic and unresponsive. Even after years pass in the story and we see him talk to other characters, there’s a sense of Kitaro being kind of clueless and unable to speak up for himself, which makes it hard to connect with the character or want to read further. As Kitaro’s origin story, this introduction also seemed like a huge missed opportunity to hint at his monster-fighting destiny. Disney’s HERCULES managed to do this when baby Hercules picked up Zeus and strangled Pain and Panic. THE BIRTH OF KITARO should have been able to do the same.

Another issue with THE BIRTH OF KITARO’s characterization (and the book in general) is the way Mizuki ignored the common creative policy of “show, don’t tell.” [MINOR SPOILERS AHEAD.] The most prominent example of this comes in the story “Nezumi Otoko Versus Neko Musumi,” which features Kitaro as he first learns about duty and responsibility. Despite being ordered by Emma Dai-O, the King of the Underworld, to take down a half-yokai named Nezumi Otoko who is conning the sick and elderly for money, Kitaro doesn’t really want to help because all humans do is make war and bully people. At the behest of his father, though, Kitaro goes to investigate, and while he’s walking he sees the suffering Nezumi has caused. As described here, the scene seems perfectly fine, but instead of letting us draw our own conclusions about what’s going on in Kitaro’s head, this moment is punctuated with text that explains what we’re looking at (“the devastation Nezumi Otoko has caused”) and Kitaro saying, “[Nezumi’s] gone too far this time.” I would have found this scene much more compelling if Nezumi lived at the end of a one-way street, and as Kitaro headed to his incredibly tall house, he spotted a dead man lying in the middle of the road, his hand outstretched with an offering to Nezumi. Kitaro’s face could be in shadow as he looks at the man, with a follow-up panel showing him walking on, the dead man in the foreground, and Nezumi’s impressive-looking house in the background. Mizuki seemed to prefer compressing his stories with exposition over giving his heavier elements and themes time to breathe, which prevents both his characters and their emotions from feeling real. The saving grace of this move is Kitaro does change as a result of the lesson he learns in this story, but even then, his characterization is muddled by the fact that he consistently tolerates Nezumi taking advantage of people in need.

Related to my point that THE BIRTH OF KITARO doesn’t really explore its mature elements is that, aside from “Nezumi Otoko Versus Neko Musumi,” most of the stories don’t engage with any kind of lesson, change, or prevailing emotion. They tend to end with, “the monster’s defeated. Thanks, Kitaro! [Kitaro will return in…]” [MINOR SPOILERS AHEAD.] Using “Makura Gaeshi” as an example of this frustrating creative restraint, in the story, the titular yokai kidnaps a child and takes him to the land of dreams. Despite some scepticism from the boy’s father, his mother puts a letter into Kitaro’s yokai post requesting his help, and Kitaro enters the picture, the boy is rescued, and the father realizes that Kitaro is real. Again, the broad strokes here are fine, but that’s basically all the story is. We don’t begin “Makura Gaeshi” with the parents arguing and the child using dreams as an escape from reality, nor does the realization that Kitaro exists go against the father’s deeply held beliefs. Not that either of these options are necessarily ideal, but I would have liked it if the stories were trying to get at some greater human truth or meaning.

Humor might have been able to make these problems less noticeable, but like everything else, THE BIRTH OF KITARO’s comedy falls flat. Sure, there are one or two moments of clever visual humor in the collection, but other than that jokes tend to either be too obvious or understated to achieve much. In this way, the book’s humor reminded me of my experience with ONE PUNCH MAN, as though the first volume of the manga did a much better job in this department, there were a lot of scenes where I felt like it wasn’t being pushed enough, especially after seeing how funny the anime is. Obviously, different mediums allow for different creative opportunities, but it was disappointing THE BIRTH OF KITARO couldn’t play to the strengths of the page. 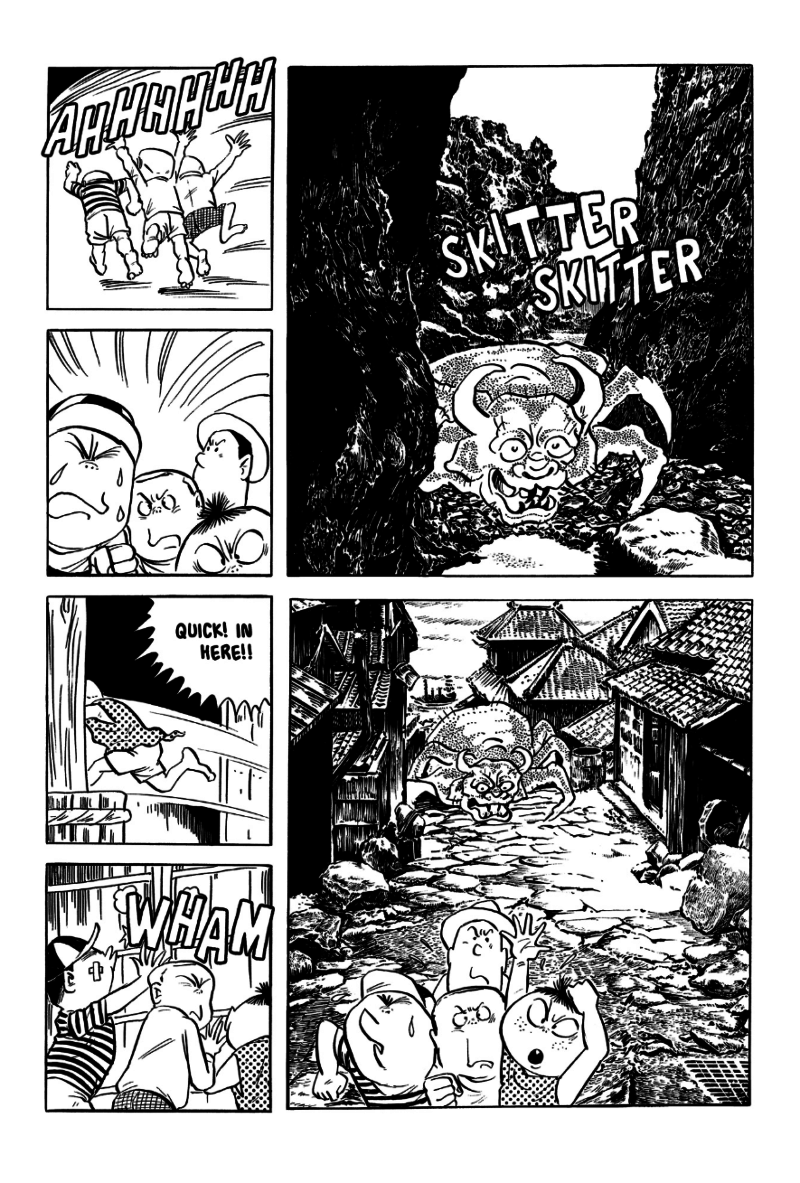 As I touched on earlier, the book’s art doesn’t fare much better, but this is more of an issue with inconsistency and the choices Mizuki made than his abilities as an artist. For example, environments are usually very detailed, but characters are sometimes drawn or inked in a way that makes it seem like another artist took care of this aspect of the book. On some pages, it actually looks like cartoon characters were cut out and pasted onto a photo background, which you can kind of see in the above image. This might have been a minor problem if this was the only inconsistency in the collection, but the detail and appearance of certain characters changes from page to page, and occasionally spirits and monsters (who I initially assumed were detailed differently to emphasize their otherworldliness) fit into the environment better than human characters. At first, I thought this might be me nitpicking, but after referencing another manga (ONE PUNCH MAN) and a series with clean lines and less emphasis on shading (USAGI YOJIMBO), the lack of intentionality to the book’s art really becomes clear.

My problems with the art don’t stop there, however. At multiple points in the collection, I found the way Mizuki implied movement between panels to be somewhat disorienting, as he seems to miss out steps when explaining how characters get from place to place. Case in point: in “The Birth of Kitaro,” the character Mizuki is looking at an abandoned temple behind his home. The page ends with a close-up on his eye as he looks outside, and the next panel shows us, ostensibly, what he’s been looking at: a hitodama in the forest. But when we next see Mizuki, he’s already outside, and he reacts to the hitodama with surprise. If THE BIRTH OF KITARO was made into a film, camera movement and changes in sound could be used to make the move outside clearer, but on the page there just wasn’t enough to make this shift feel intuitive. Though this might have been another symptom of Mizuki trying to rush through his narrative beats, this was an even bigger issue than him sacrificing narrative depth, as he was interrupting the experience of simply reading his stories.

If it wasn’t clear already, I was really disappointed by THE BIRTH OF KITARO. Despite some charming magical items and fun yokai takedowns, the book doesn’t do anything particularly well, and by refusing to entertain its heavier elements, it doesn’t appear to even be trying. Based on how the book improved with each story, a later collection might live up to the potential of the series’ central premise, but as it is, THE BIRTH OF KITARO is just a big waste of time.

READ: Want to learn more about YOUNG JUSTICE? Check out our five reasons why you should give the series a shot!