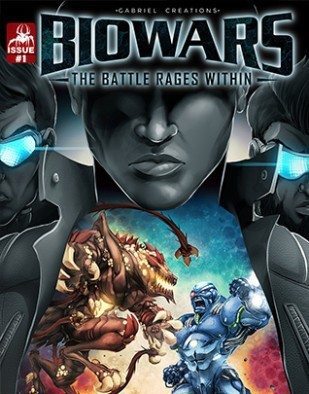 BioWars is a webcomic that is out and available now! Brought to you by Gabriel Creations, BioWars blends sci-fi, fantasy, and political thrillers. This story reminds me of the movie “Osmosis Jones,” where there are creatures in our bodies that are thinking, living beings that live to protect us from harm. BioWars takes that idea and takes an entirely different spin on it. Instead of it being a silly comedy, it is a serious story filled with mystery and intrigue.

There are two stories being told simultaneously in this series. The first is about Alex Hawking, a young man trying to get a flash drive to the US senator to fulfill his scientist father’s dying wish. The second story is BioWars, the inner battles that are occurring within Alex’s body after he is infected with a deadly virus. If these two stories weren’t happening within the same comic, an average reader would probably have no idea that they were related.

The story involving Alex Hawking is a scientific thriller, where an uninterested youth is forced to rise to the occasion to save the world. The art work for Alex’s story is rather lightly colored and doesn’t try too hard to capture your attention. The interest in this story is whether Alex can achieve his goal, but it involves less thought, seeing as it’s a simple story when looked at objectively. The writers still manage to make it entertaining in the same way a “Law and Order” episode is entertaining- not too much action, but enough suspense to carry your attention to the second story being told.

The BioWars storyline is extremely different from the aforementioned storyline. For one, the artwork is vibrant and pops out at the reader. I feel that the writers put a lot more time and thought into making the character designs and story for the Bio-Warriors. If that is the case, it shows and is incredible! The world created within Alex’s body is amazing, and they way they base each character’s powers and personality to what actual cells and antibodies do in human bodies is genius. One could learn about the inner working of the human body by reading the BioWars storyline. The way the characters and story play out in the BioWars can only be described as epic.

The transition from Alex’s world to the world of the BioWars is seamless and never fails to excite me. If I had to pick a favorite story between the two, it would definitely be the BioWars. This is not to say that Alex’s story is not engaging, but I love sci-fi stories dealing with different ideologies, especially when coupled with some intense action scenes. The BioWars give me all of that and more! This comic has something for a comic book reader of any kind to enjoy. If reading about a coming of age story with some spectacular suspenseful story telling is your cup of tea, then you will love Alex’s storyline. If you favor badass fight scenes with a sci-fi feel, where several characters work together to fight a war to save their world, then BioWars is for you!

Negatives:
– Alex’s story’s artwork doesn’t catch the reader’s attention as much as BioWars