The 80’s created some pretty iconic moments. From Ferris Bueller to Beetlejuice, these characters and stories still captivate us with their kitschy-ness. And if there’s one 80’s classic that falls into this category, it’s BILL & TED’S EXCELLENT ADVENTURE. Though the movie came out in 1989, the legacy still lives on. Brought to you by writer Brian Joines and artist Bachan, Bill and Ted are back for another excellent adventure. We’ve seen them save the future and buddy up with the grim reaper himself, but in BILL & TED SAVE THE UNIVERSE there’s a lot more at stake than a history project.

Strange Things are Afoot in BILL & TED SAVE THE UNIVERSE

In the comic, it’s been five years since Rufus introduced Bill and Ted to their destinies as musical peacekeepers. Since then, their tunes have reached across the galaxy, far from San Dimas, California. However, not everyone in the universe believes the Wyld Stallyns’ songs are the best way to bring peace. In fact, the Grand Cosmic Council has a few questions about how their music can end wars and resolve centuries long feuds. 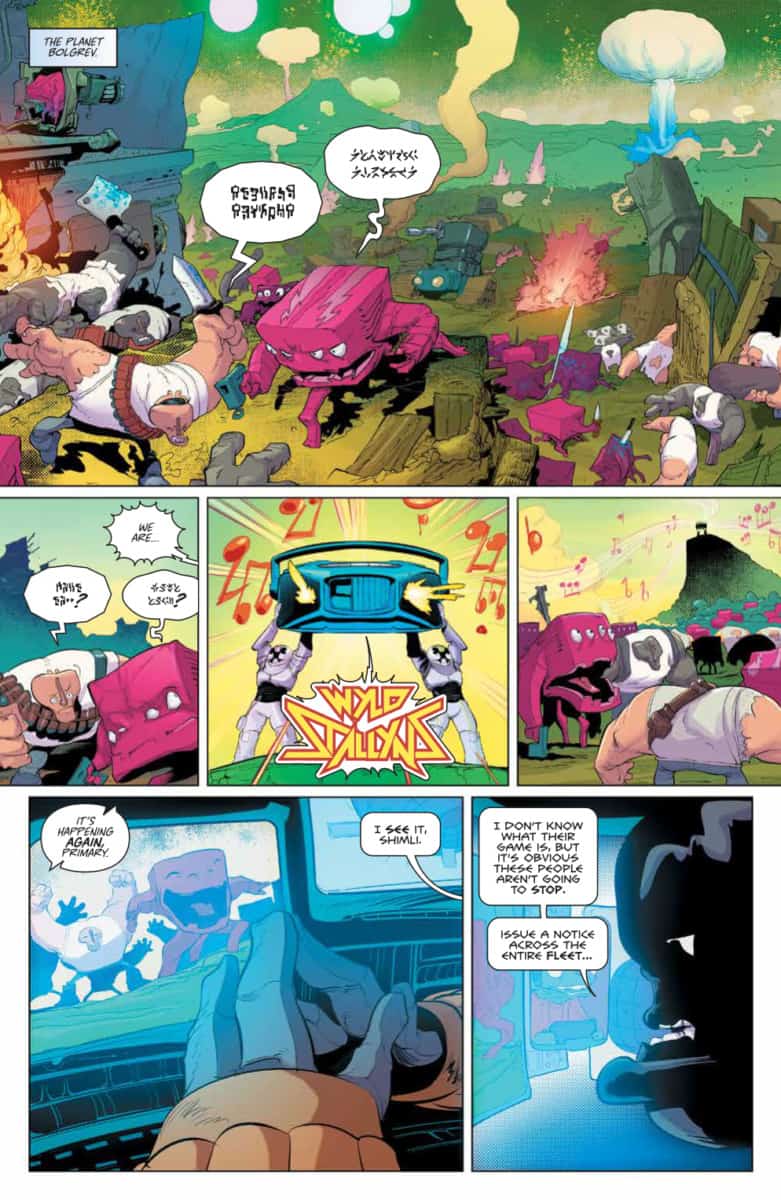 But before we get into intergalactic politics, we see what the boys have been up to. Through an elaborate chase involving Vlad the Impaler and Bram Stoker, Rufus brings Bill and Ted to a surprise band anniversary party. The party is in full swing with dozens of other historical figures, embarrassing family members, and even good old Death. But Death’s date, Fate, is a bit of a buzzkill and tells Bill and Ted that their future is full of misery and pain. The night gets even more interesting when Ted’s younger brother’s girlfriend turns out to be an undercover alien. Really, it’s just a regular day at the office.

The original Bill and Ted movies already have a cartoonish quality, and BILL & TED SAVE THE UNIVERSE plays off that aesthetic. The bright colors are garishly 80’s but not overwhelming. Bachan’s illustrations are dynamic and speed up the comic’s pacing. Joines and Bachan also worked on BILL & TED GO TO HELL, so they’re no strangers to the comic’s antics and high energy. The whole comic gave off a GUARDIANS OF THE GALAXY vibe as well, which makes sense considering their respective throwback influences such as color choice and fashion. 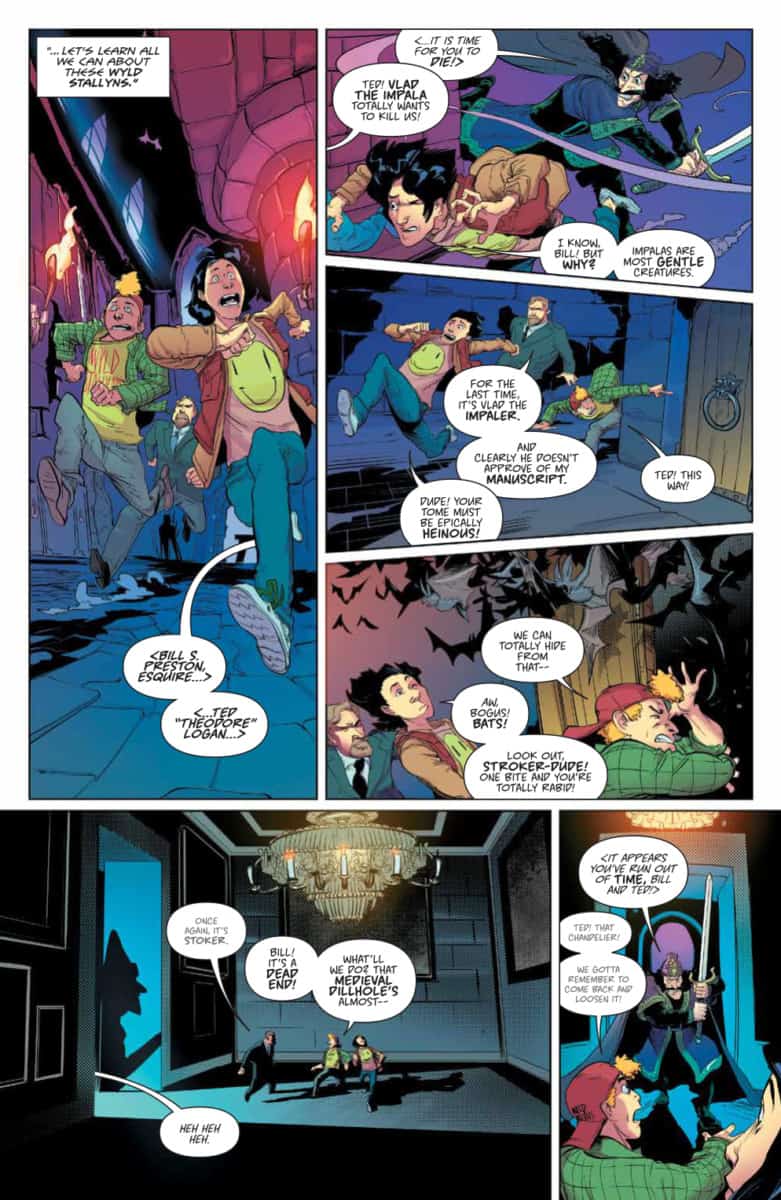 However, I would have liked to see more variance in female character design. Like many comics, cartoons, animated movies, BILL & TED SAVE THE UNIVERSE has very distinct male characters. But when it comes to women, it’s like there’s only one model: an exaggerated hourglass figure, odd proportions, and clothing that defies the laws of reality. And this is totally bogus. Bill and Ted are certainly the main characters, so it’s obvious that more work goes into creating them. However, it would be nice to see more effort go into differentiating the female characters as well. 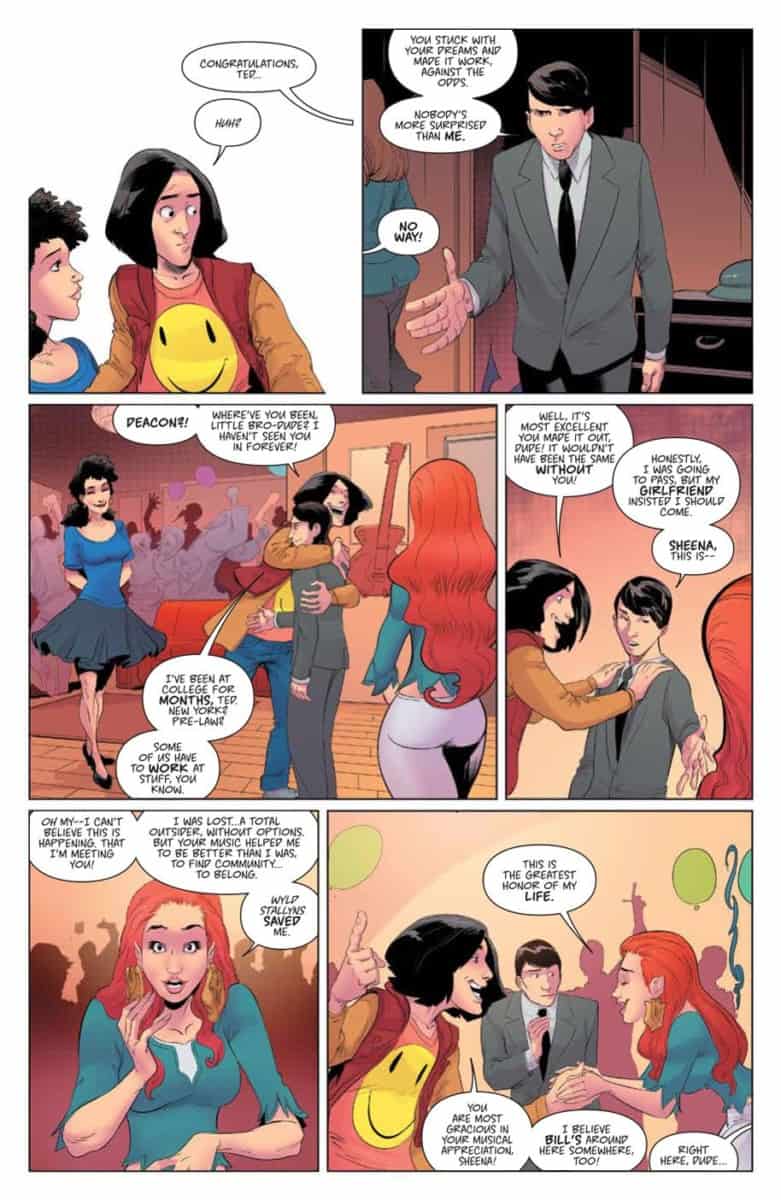 They’ve Still Got it, Dudes

Just like the movies, BILL & TED SAVE THE UNIVERSE is just a great time all around. Though the stakes are higher than ever before, Bill and Ted stay true to their quirky selves. Sometimes adapting movies to other media can take away some of the zest, but this comic never felt over-the-top. At least, no more excessive than a normal Bill and Ted plot line can get. And with the comic format, we get to see aspects that aren’t as possible in a live-action movie from the 80’s. Amplified facial expressions, visual sound effects, and varying panel use are just a few examples.

CLICK: Not in a particularly silly mood? THE BUNKER VOL. 1 has what you need! 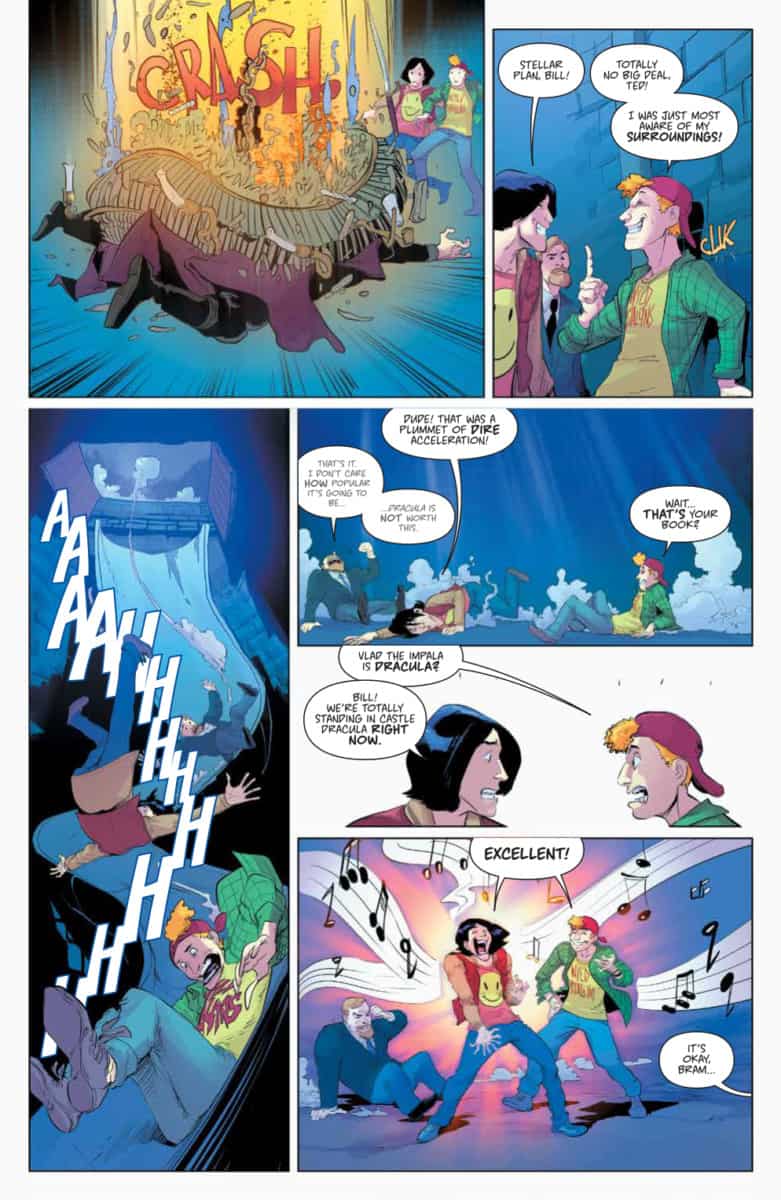 As a huge fan of both Bill and Ted movies, I was very pleased with this comic. And with three issues left, the story should tie up nicely by the end. But seeing as Boom! Studios has a good history with the duo, this may not be the end. So if you’re patiently waiting for the third BILL & TED film, BILL & TED SAVE THE UNIVERSE is a great distraction.