I’ve lost roughly 45 pounds since high school. Before you say “Wow! Good for you,” I’d like to unpack a few things. First, being fat is not a reason to dismiss someone’s humanity. I’m not more worthy of love or respect now than I was then. Luckily, I lived in a community that didn’t make life hard on me for being fat. Second, my size didn’t stop me from participating in life, or from being as awkward as every other teenager. Because I had a supportive community, I threw myself into as many activities as possible. That includes physically rigorous activities like swim team. I was a healthy, awkward, heavy weight nerd. But it wasn’t as though I didn’t realize that I didn’t fit American cultural ideals. Sadly, there wasn’t a lot of dialogue about body positivity at that time. Nor were there great plus-sized characters in pop culture.

Happily, the dialogue is changing. For example, in a recent article, Dani Beckett provided many ways to make the world better for plus-sized people. Beckett describes how “fat” does not mean “unhealthy” and mentions ways to call out fatphobia. Importantly, Beckett notes that we must support “fat people as the romantic leads.” As in any group, positive representation matters. The article reminds us that true intersectional feminism means supporting people of all sizes and identities. If you agree with Beckett’s points – and I hope you do! – we have the comic for you! Julia Arostegi’s charming webcomic BIG JO is challenging the lack of positive representation of fat characters in comics. Indeed, BIG JO is ready to take on the fat-shamers and body police.

Criticizing people of size is all too common. Our society tells us that fat prohibits women in particular from being healthy, feminine, or sexy. In popular culture, women of any size larger than 0-4 rarely appear. And when they do, they are relegated to the position of sidekick or joke. (Think Fat Amy from PITCH PERFECT or Courtney Cox’s fat suit on FRIENDS). More often than not, society assumes fat people have less to offer than everyone else. This is why comics like BIG JO are crucial. 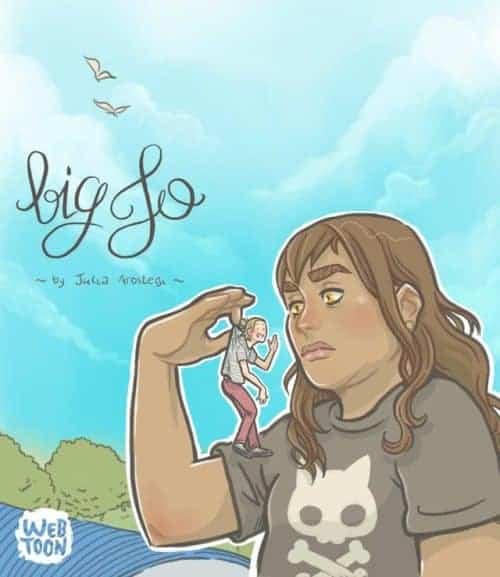 BIG JO’s eponymous heroine Joan “Jo” Rodriguez is an unapologetically fat Latina teenager. In many ways, Jo is a typical teen. She experiences crushes, moments of self-consciousness, and a longing for adventure. Arostegi does not sugarcoat her heroine’s life. Jo faces harassment for her size as well as her confidence. The comic’s primary plot focuses on Jo’s participation in a BIGGEST LOSER-type game show. However, Arostegi takes her time to develop her characters. The comic proves how awesome Jo truly is. It also shows how to fight against the negative impacts of fat-shaming.

Jo doesn’t just put up with the insensitive jock Tom. In fact, she teaches him how to be kinder and more self aware. Prior to meeting Jo, Tom asks questions like “Why don’t you just try losing weight?” Questions like this are harmful because they imply a range of negative beliefs about fat people. Jo is not unhealthy or lazy or self-loathing, nor should she. As the two become closer, Tom realizes how wrong he was about what it means to be fat. Charmingly, the two characters unite a group of diverse characters (including former bullies) who love Jo’s beauty, charm, and tenacity. 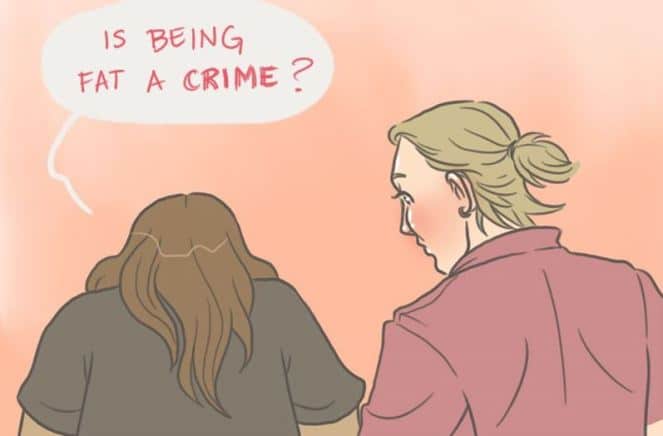 BIG JO grapples with the myth that fat people are not fit. The comic playfully educates readers about health and fitness as Tom trains Jo for the “Boo, You’re Fat” game show. While fitness goals are great, Tom has unfortunately made a number of incorrect assumptions. To his surprise, Jo is an extremely fast runner and actually quite healthy. This reminds readers that health doesn’t have a size.

Femininity and Size Are Not Related

Another myth explored in BIG JO is the link between size and femininity. Women in particular face criticism for being too big in any way. Unfortunately, this leads to larger women like Jo being seen as too much. As a result, they are assumed to be incapable of femininity and/or attractiveness. In the beginning of BIG JO, Jo wears t-shirts and pants that mostly cover her body. But over the course of the comic she gains confidence to wear exactly what she wants. From bikinis to track suits to skirts. What is refreshing about BIG JO is that readers can watch as Jo plays with fashion like any teenager. She is tough and self-assured. Sometimes she’s butch, other times she is a toga-clad fairy princess. In each incarnation she swiftly wins hearts.

BIG JO demonstrates the fact that fat people are not devoid of feelings or sexuality. As a young hormonal teenager, Jo has crushes. Importantly, other characters have crushes on Jo. Refreshingly, Arostegi isn’t afraid to make Jo a romantic lead. And as Jo gains confidence in her own body, she also gains admirers.

There is no single way to craft a body-positive comic. Indeed, challenging fat-shaming in the negative world of the Internet is a herculean task. There are two possible approaches to to the problem. First, comics can simply feature characters who do not fit the skinny model. For example, Mars’ webcomic LONG EXPOSURE tells the story of Jonas, a young bisexual teenager. Short and stout Jonas is the polar opposite of his extremely thin bully Mitch. However, LONG EXPOSURE does not analyze Jonas’ or Mitch’s size. Indeed, the characters simply live life like everyone else. Similarly, Savi’s GEORGE AND JOHNNY  stars plus-sized George. On the first day of school, he worries about squishing his deskmate but otherwise navigates life like any other teenager. 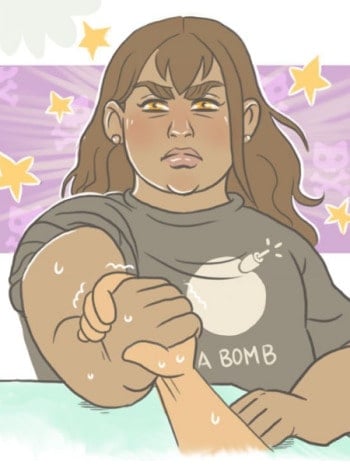 Webcomics such as LONG EXPOSURE are body-positive because they portray characters of different sizes without comment. However, this isn’t the only way a webcomic can tackle plus-size representation. Webcomics like BIG JO take a more direct approach, addressing body positivity as a major plot point. BIG JO rejects fat-shaming but doesn’t pretend it doesn’t happen. For example, when Jo stands up for her friend Arthur, a bully uncreatively calls her fat. Jo pretends she isn’t hurt, because she knows being fat is not a flaw. However, the sting of being publicly degraded for who she is still affects her.

On top of great character development, Arostegi’s artwork makes BIG JO a humorous comic. Arostegi does not hide the awkwardness of high school. The characters display a full range of bodies – with acne, sweat, anxiety, and everything accompanying puberty. Instead of being negative, Arostegi’s artwork joyfully shows off this diversity. Importantly, Jo also starts to gain confidence in herself and identity.

Conflicted I FEEL PRETTY Never Quite Figures Itself Out

As a fat teenager, I would have loved to have seen characters like Jo in pop culture. Characters of size are few and far between. Comics that are willing to cast these characters as the lead are even less common. Comics like BIG JO give readers a chance to see themselves in comics. And even if you can’t directly relate, seeing body diversity in comics reminds us that size doesn’t determine human worth. BIG JO reminds readers to love their bodies and stand up against bullies.

Read all of BIG JO here. The webcomic updates on Mondays!